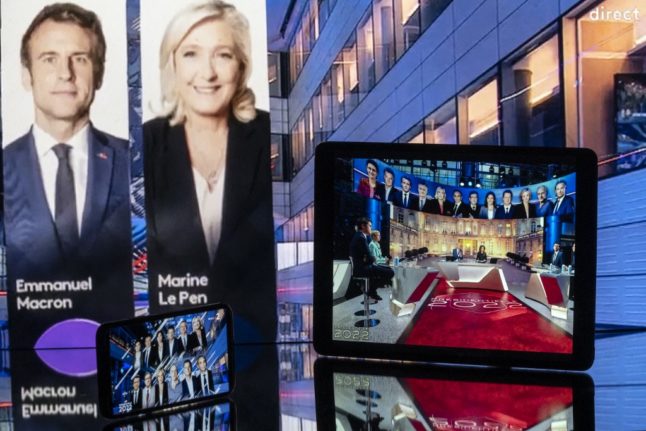 That’s it for our live blog, we’ll continue with election coverage over on The Local France’s homepage.

The final definitive results will be published by the Interior Ministry later on Monday morning, but with 68 percent of the votes counted, Macron and Le Pen move on to the second round.

Here’s our guide to what happens in the hours and days ahead.

Violence has broken out in Rennes after the announcement of the election results.

With most of the results now counted, Macron and Le Pen remain the winning candidates who go through to the second round, but far-left veteran Jean-Luc Mélenchon is closer than initially predicted.

It’s become a popular trope among some on the left that Macron and Le Pen are ‘all the same’. It’s not true though – here’s a look at their respective programmes and what they would like to do to France.

EXPLAINED: The key policy differences between Macron and Le Pen

Addressing his supporters at the Porte de Versailles exhibition centre in Paris, Macron has called on people to join him to block the far right from power.

“I invite our fellow citizens, whatever their political leaning, to join us. Some will do so to block the far right and I am aware that this does not mean support”.

He continued: “Make no mistake: nothing is decided. The debate that we are going to have over the next fortnight will be decisive for our country and Europe.”

A Ifop poll conducted following the publication of provisional first round results has predicted that Macron will take a very narrow victory in the second round.

Further polls on the second round will be done over the days to come, with other early polls showing a slightly wider lead for Macron.

Giving his reaction to the projected first round results The Local’s political columnist John Lichfield said he now believed Macron would win the second round but warned that his re-election was “by no means guaranteed”.

“I would say Macron’s people would be delighted with those scores in that the tide had been running in Marine Le Pen’s favour in the last few weeks,” he said.

“But there’s not that many votes out there for Macron to win in the second round. It’s going to be very tight.

“I think the second round will be hard for Le Pen because people will concentrate on her as a possible president rather than a nice woman who likes cats.

“It’s going to be a tough second round campaign. I think Macron will win but it’s by no means guaranteed”.

You can hear more from John in this week’s Talking France podcast which will go live on Monday.

The extreme right candidate Eric Zemmour has called on his supporters to back Le Pen in the second round.

The candidate, who came fourth with a preliminary vote of 7 percent, told supporters: “I am calling my supporters to vote for Marine Le Pen; I believe my country is in danger.”

He added: “In the coming days, you will hear people explain what we failed. I said to these millions of French people, things will never be the same as before.”

The far-left candidate, who came third in polling, has told his supporters: “You know who we will never vote for.

“You should not give a single vote to Madame Le Pen,” he repeated three times.

However, he did not call for his supporters to vote for Macron.

Far-right candidate Marine Le Pen has called on all those who did not vote for Emmanuel Macron in the first round to “rally” behind her.

In a speech to Champagne-drinking supporters, she said that the country faced a choice: “Either division, injustice and disorder, or the gathering around social justice”.

Le Pen touched on key themes she has addressed throughout the campaign: immigration, security and purchasing power.

8 of the 12 candidates scored less than 5 percent and will therefore only be able to claim 4.75 percent of their election expenses back from the state.

Candidates who score 5 percent or more can claim back 47.5 percent of their campaign expenses.

Among those unable to claim cash back are Anne Hidalgo and Valérie Pécresse, who represent Parti Socialiste and Les Républicains, the traditional parties of the centre-left and centre-right in France.

8.30 – defeated Pécresse, Jadot, Hidalgo and Roussel call on their voters to back Macron in the second round

“I will vote for Emmanuel Macron to stop Marine Le Pen,” said Pécresse, whose initial score was just 5 percent.

“I am calling on those electors who trusted me to consider the seriousness of any vote different to my own at the second round.”

8:15 – Misery for Pécresse and Hidalgo

Whilst Macron will go on to face Le Pen in the run-off vote in two weeks time initial results suggested it would be a miserable night for centre right Valerie Pécresse and Socialist party candidate Anne Hidalgo.

Pecresse scored just 5.1 percent of the vote whilst Hidalgo was on 1.9 percent.

The preliminary results are on, showing Emmanuel Macron and Marine Le Pen have both qualified for the second round – with the incumbent president scoring 28.2 percent, whilst the far-right candidate was 24.2 percent.

Third was Jean-Luc Mélenchon on 20.2 percent.

The percentages will likely alter slightly as the full results are counted throughout the day.

The 8pm result is not the final result, but is based on a sample of representative polling stations and is traditionally highly accurate.

The result means Macron and Le Pen will now go through to a second round of voting on April 24th.

Ipsos has estimated that the overall turnout is 73.5 percent, 4 percent down on 2017.

The provisional result is announced at 8pm, and campaign workers have gathered at their party HQ to hear the results.

Polling stations have now closed in most of France. However larger cities have the option to keep theirs open until 8pm.

In the polling stations that have closed, counting will now begin.

Some polling stations – carefully selected to give a representative sample – will phone through the results of the first 100, 200 or 400 votes counted (depending on the size of the commune) to polling organisations.

Those results will form the basis of the initial result, which is given at 8pm. More on how the process works here

Voters in Paris and several of France’s larger cities have until 8pm to cast their vote.

Here’s Emmanuel and Brigitte Macron going for a walk on the beach – and maybe doing a little last-minute canvasing – after casting their vote in Le Touquet earlier today. 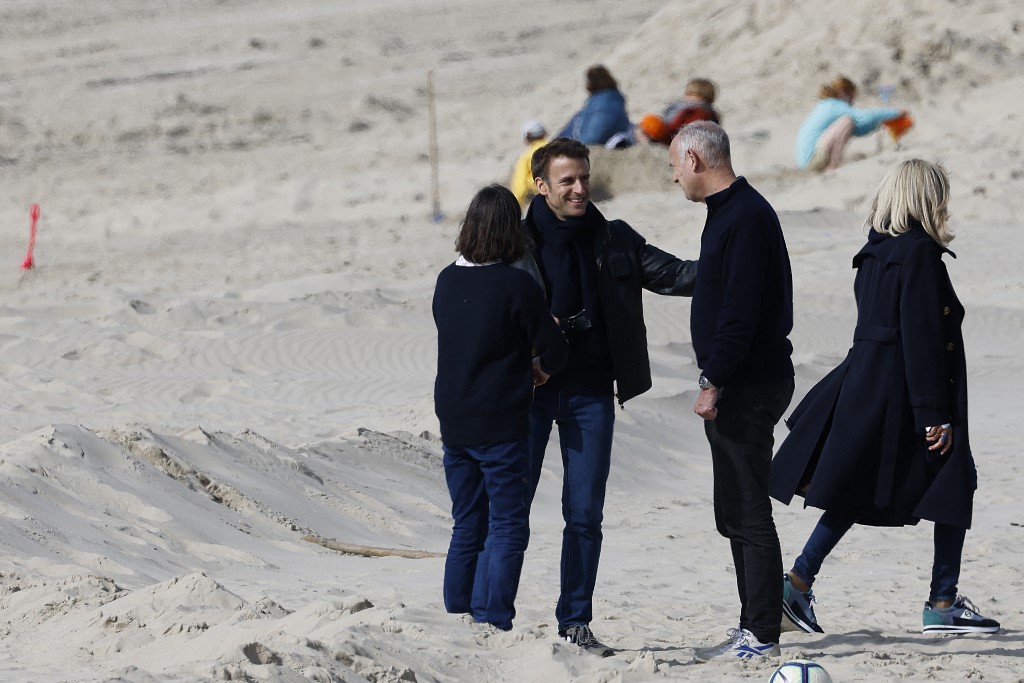 Emmanuel and Brigitte Macron talk with people during a walk on a beach after he voted for the first round of France’s presidential election at a polling station in Le Touquet, northern France on April 10, 2022. (Photo by Ludovic MARIN / AFP)

They have now arrived back in Paris and will follow the results from the Elysée.

It’s not just in France that polling stations have been open, French citizens living overseas retain their right to vote and polling stations are set up around the world to allow them to cast their ballot.

Casting a vote comes with a little ceremony in France, once you have dropped your ballot paper into the box, the election official calls out “à voté” (voted) and you can have your election card stamped as a souvenir of your foray into democracy.

Turnout at 5pm stood at 65 percent, according to the Interior Ministry, below the turnout of 69.42 percent at the same point in the 2017 election.

This includes people from all around the world who have made France their home, including many British long-term residents of France who took French citizenship after the Brexit vote.

We spoke to some of them about how they felt to be voting for the first time.

The final voter turnout will not be known until later, but the official statistics released at 12 noon showed a turnout of 25.48 percent, slightly down on the 12 noon data from 2017, which stood at 28.54 percent.

Voters have until 7pm to case their vote in most parts of France, and until 8pm in the bigger cities.

In some parts of France’s overseas territories, voting opened on Saturday and has already closed. The difference in time is to allow all votes to be counted in time for mainland France’s 8pm deadline.

All 12 of the candidates have now voted, presumably for themselves but maybe not.

Here’s Marine Le Pen voting in Henin-Beaumont in the northern Pas-de-Calais département which she represents.

Emmanuel and Brigitte Macron cast their votes in the seaside town of Le Touquet, their preferred holiday destination where Brigitte owns a house.

On Sunday, April 10th, France heads to the polls for the first round of voting to pick its next president.

Polls close at 7pm in most areas, and 8pm in the big cities, and then the ballots start to be counted and the results come in.

We will be following all the action live this evening, bringing you the latest results, as well as the reaction, comment, analysis and what all of this means for round two – which will be held on April 24th.

As we go, we will also be explaining some of the peculiarities of the French system – such as why French elections have two rounds?

We’ll be looking at the voting process and how France manages to produce such accurate early elections.

And we’ll be asking if there is any truth in the idea that French presidents rarely get re-elected.