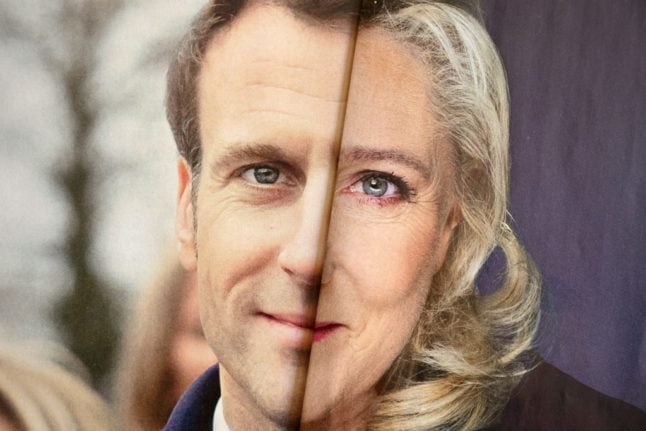 Folded election leaflets show the faces of French President Emmanuel Macron and his second-round opponent, Marine Le Pen. We take a look at the differences between the two. (Photo by Nicolas TUCAT / AFP)

Macron has promised to cut taxes for self-employed people for industrial and agricultural production. He said he will remove all tax on inheritance valued at less than €150,000.

He has also pledged to restrict access to certain welfare payments.

Unemployment in France is at its lowest level since 2008 and Macron has set an objective of reaching full-employment in his second term.

He wants to invest €30 billion into high-tech industries, continue to support the ‘French Tech‘ sector, develop 100-percent French supply chains in renewable technologies and continue to position France as one of the EU’s prime countries for foreign direct investment.

Le Pen would like to renegotiate free trade deals, create a sovereign wealth fund and subsidise French businesses to give them a competitive edge on the global market.

She also wants to reduce taxes on young French people to incentivise them to stay in the country; give greater financial support for single mothers; get rid of inheritance tax for poorer families; cut VAT on petrol, gas and electricity; and impose a new wealth tax on the financial sector.

She wants to restrict welfare payments to people who are not French citizens and reduce France’s deficit – not through austerity measures, but rather by investing more money into the economy and vague plans for industrialisation.

Most economists say that her plans do not add up.

Macron is a devout believer in the European Union project and would like to see the bloc become more integrated – and more autonomous on the global stage, by investing in defence.

READ MORE How powerful is the French military?

Le Pen would like to reform the EU to make it more of an assembly of sovereign nations, rather than a supranational body. Unlike Macron, she would like to withdraw from NATO.

Le Pen’s promise of ‘France-first’ policy that would favour French people ahead of foreigners, including EU nationals, would challenge the foundations of the European Union.

Both candidates are seeking to invest heavily in French defence spending.

Macron’s belief in the importance of a strong European Union has only been strengthened by the invasion of Ukraine.

He has taken a tough stance on Russia and was a key figure in pushing for EU sanctions. He has played a prominent role in attempting to mediate the conflict, speaking regularly to Russian premier Vladimir Putin at the request of Ukrainian leader Volodmyr Zelensky.

Macron’s Government has unveiled a package of measures to insulate the French economy from the war, including ending dependency on Russian oil and gas by 2027.

Le Pen has accused Putin of war crimes in Ukraine, but was once close to the Russian leader, even including a photo of him in her campaign leaflets, which were hastily withdrawn after the Russian invasion of Ukraine.

In the past, her political party, now known as the Rassemblement National, has borrowed tens of millions of euros from Russian banks – loans it is still paying off today.

She has previously argued that “there was no Russian invasion of Crimea”, referring to the 2014 annexation of the region, and has said that Putin could once again become an ally of France and that she saw him as a useful partner in the fight against “Islamist fundamentalism”.

Macron has drifted to the right on immigration since winning the 2017 election.

He would like to reform the Schengen zone to make it harder for immigrants to enter Europe, expand France’s border force and expel foreigners who “disturb the public order” – without giving detail on what would qualify as such a disturbance.

She wants to end all non-economic immigration and treat asylum requests overseas rather than in France.

Macron has said that permanent/long-term residency cards (10 years) would only be given to those who have passed a French exam and have a job. Currently, there is no language test required to obtain residency rights in France – these tests are only required for acquiring citizenship.

He also wants to reform the asylum process to “expel more efficiently” those who do not qualify for refugee status.

Le Pen wants to cut off all welfare payments to those without French citizenship; take away visas/residency cards of all foreigners who have been out of work for one year; get rid of jus soli (the right to citizenship through birth in France); and give French people priority in social housing and employment ahead of foreigners including those from the EU.

Macron has long touted himself as an environmental defender. If reelected, he has promised to increase the country’s solar energy supply by a factor of ten; invest in green technology development – notably ‘green hydrogen’; continue to energy-saving renovation of French housing; plant 140 million trees by the end of the decade; and build 50 off-shore wind farms.

READ MORE How committed is France to tackling environmental issues?

Le Pen has promised to make ecology one of the “levers of national renewal” but is thin on detail.

She has however pledged to give €5 billion to French households by taking away subsidies used to build and maintain wind farms. She has also promised to progressively dismantle existing wind farm sites.

Both Macron and Le Pen are committed to developing France’s nuclear energy sector.

Macron promises to create 10,000 more police and gendarme jobs, doubling the presence of law enforcement officers in the street and on public transport.

He has pledged to continue closing down “radical mosques”, triple the fine for street harassment and push delinquent youths towards some kind of military training.

Le Pen has promised to make security a priority should she win the election, vowing to introduce tougher sentencing, reintroduce minimum sentences, better protect policemen under the notion of ‘legitimate defence’ and expand the country’s prison capacity.

She says she intends to make it a crime for Muslim women to wear the hijab, or headscarf, in public, punishable by a fine.

Macron has made reforming the French pension system a priority, leading to widespread protests during his first term.

He would like to raise the retirement age from 62 to 65 for most workers, bringing France in line with many other EU countries. He said that he would ensure that pensioners receive payments of at least €1,100 per month.

Le Pen has said that she would like to lower the age of retirement to 60 for those that have been working since before they were 20. She would like to ensure that pensioners receive a minimum monthly payment of €1,000.