With war raging in Ukraine, we examine the defence capacity of the French army. (Photo by SEBASTIEN BOZON / AFP)

French president Emmanuel Macron has been clear on one thing, telling the French “we are not at war with Russia” while his defence talk has been firmly focused on international co-operation and EU defence.

But while France does not plan on sending troops to Ukraine, the question of defence is looming larger now than at other point in recent history.

How big is the French military?

As of July 2021, the French army had 222 Leclerc tanks, 267 combat helicopters and 739 drones. The navy had 38 ships, excluding aircraft carriers, submarines and minesweepers. The airforce counted 211 fighter jets.

What are its strengths?

A 2021 report from the Rand Corporation, an American think-tank partly funded by the US government, found that the French military was among the “most capable” in Western Europe.

“France could support a US-led war in Eastern Europe; it has and is developing the capabilities required to take on a sophisticated peer and help meet some of the needs identified to participate in high-intensity conventional warfare,” said the authors.

One of the guiding principals of the French military is that it should be light enough to deploy anywhere, at any time.

“Today Paris is motivated by the conviction that it cannot afford specialisation and must instead invest in a small, but high-quality, professional one-size-fits-all force,” noted the report. 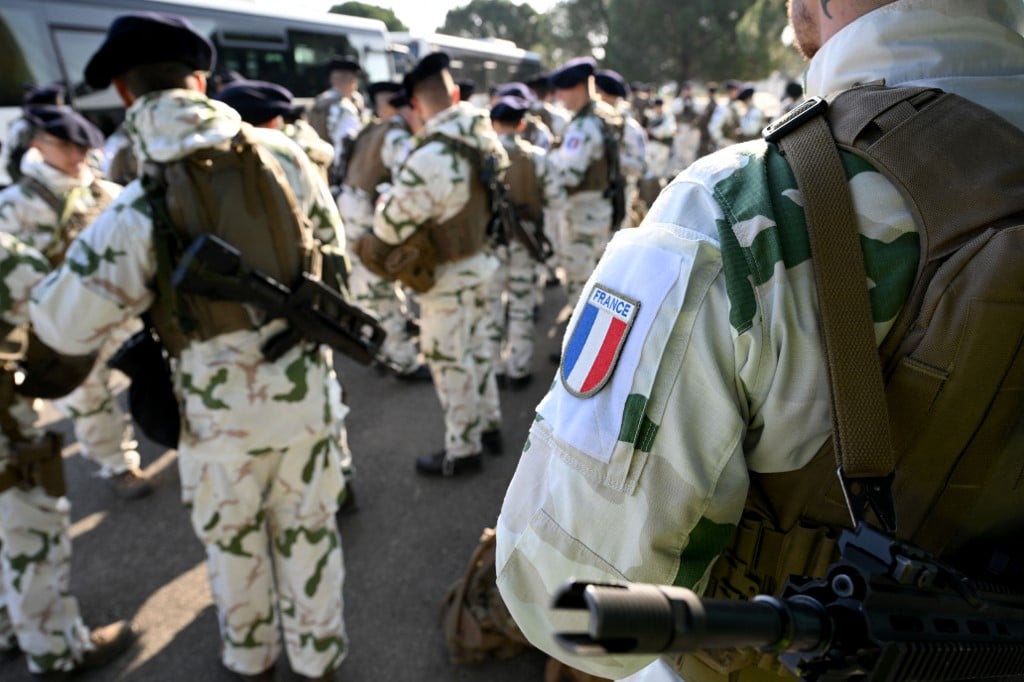 A French mountain division prepares to deploy to Romania as part of a NATO mission. (Photo by Nicolas TUCAT / AFP)

“France is the only European country capable of unilaterally engaging its forces overseas,” said Jean-Jacques Roches, director of the Institute of Weapons and Defence at the University of Panthéon-Assas.

“In Africa for example, only the French are able to rapidly deploy a force on the ground”.

What are its weaknesses?

Experts point out that while France is a strong military power compared to its neighbours, it would struggle to wage a long high-intensity war, in which two developed nations go head-to-head for a sustained period of time.

“We have an army that is trained for short, expeditionary exercises,” said Roche.

IFRI, a French think tank specialised in international relations, published a report in 2021 that found the French armed forces lacked the “mass” to fight in a high-intensity conflict.

“Since 1990, French armies have constantly financed modernisation by cutting personnel,” it wrote.

“The return of strategic competition between the great powers and the prospect of high intensity fighting calls into question the current balance between quantity and quality.”

“The prospect of a confrontation against an equally matched adversary, capable of mobilising lethal force equal or even greater [than France] poses the calls into question the quantity of men and material”.

The former head of the French land army, General Thierry Burkhard, who is now the Chief of Defence staff, put it more bluntly in an address to the Assemblée nationale in 2020.

“We need greater mass,” he said. “We can have the most modern material in the world, but it will only allow us to win it is used by hardened soldiers who are sufficiently trained.”

A parliamentary report published in February 2022 found that in a high-intensity war, the French airforce could run out of missiles in just two days.

“Russia is a great military power compared to France even though its GDP is much smaller. Power is a question of will – and it is not certain that France has the will to use force as an expression of power,” said Roche.

How does the French military compare to that of other nations?

There is no official ranking of the world’s most powerful military forces. But since 2006, an organisation called Global Firepower has been assessing countries according to their capacity to wage conventional (non-nuclear, non-chemical, non-biological, non-radiological) war, integrating factors such as manpower, aircraft strength, artillery power, logistical infrastructure and geography.

France came 7th out of 142 countries in the 2022 table, coming in behind the United States, Russia, China, India, Japan and South Korea. It scored particularly well as far as attack helicopters and special mission aircraft were concerned.

As a proportion of GDP, France spends more than most other NATO countries when it comes to defence and plans to spend around €41 billion on defence in 2022. 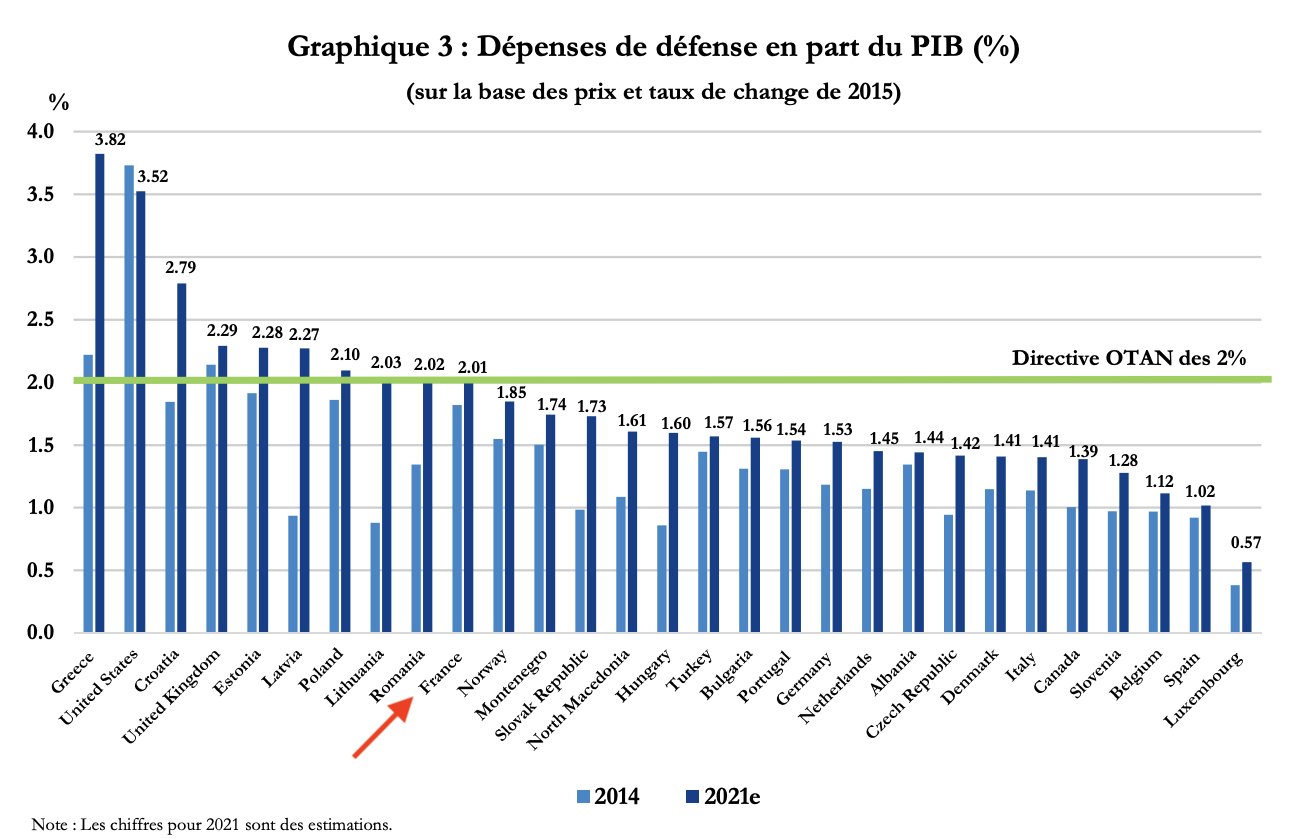 French defence spending as a proportion of GDP is higher than most of its NATO allies. The dark blue line provides an estimation for 2021. (Source: NATO)

When it comes to billions of dollars invested in defence in 2021, France is the fourth highest spender behind the US, the UK and Germany, according to NATO.

“Germany has a greater budget but does not have the same nuclear weapons of dissuasion,” said Roche, who added that French foreign policy allowed the country to intervene where its German or British allies would not.

More than 30,000 French servicemen were deployed in 2021, mostly overseas.

According to the French Defense Ministry, France also has permanent military bases in Gabon, Senegal, Ivory Coast, Djibouti, UAE, the Antilles, La Réunion, Mayotte, New Caledonia, French Polynesia and Guyana. The number of personnel at these bases varies between 350-2,100. 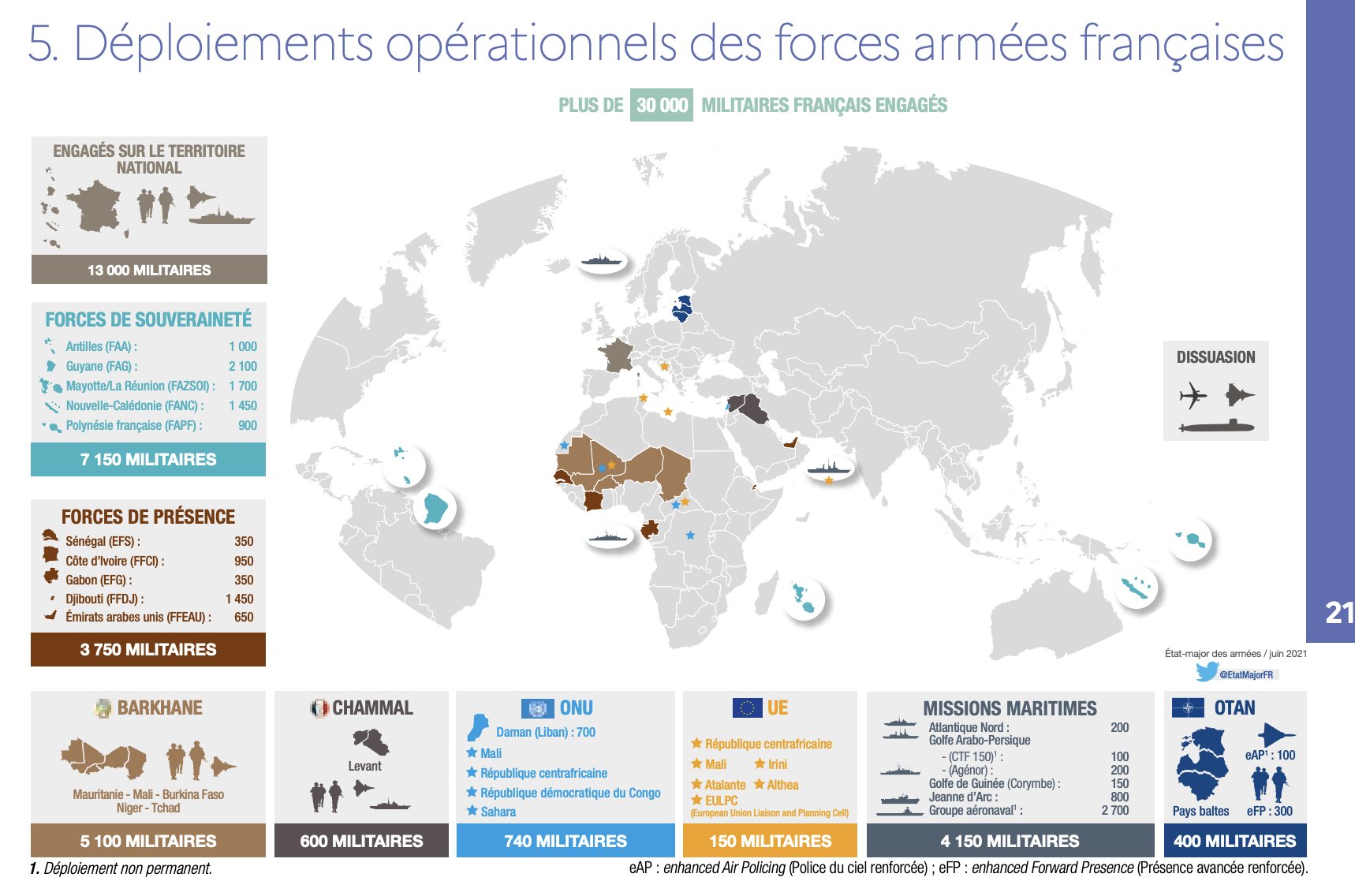 A map shows where French soldiers were deployed in 2021. (Source: French Defence Ministry)

Currently, the French military is deployed in the following operations:

France has not sent soldiers to Ukraine but has massed troops and fighter pilots in other eastern European countries like Poland, Romania and Estonia, should Russia decide to attack any of these NATO states. From mid-March, French pilots will be policing the sky over Estonia. France has also sent military equipment to the Ukrainian defence forces.

An investigation published by French investigative organisation, Disclose, found that France exported €152 million worth of military hardware to Russia from 2015-20. The Defence Ministry said that any shipments to Russia were the result of deals signed before sanctions were passed in 2014 and that no new deals had been passed since then.

Although it announced the withdrawal of troops from Mali earlier this year, France remains active in anti-terror operations in the Sahel region of West Africa, codenamed Operation Barkhane. The Malian government initially called for French intervention as extremist forces advanced on the capital, Bamako, in 2013.

To the South, the French navy is involved in training anti-piracy forces in the Gulf of Guinea. 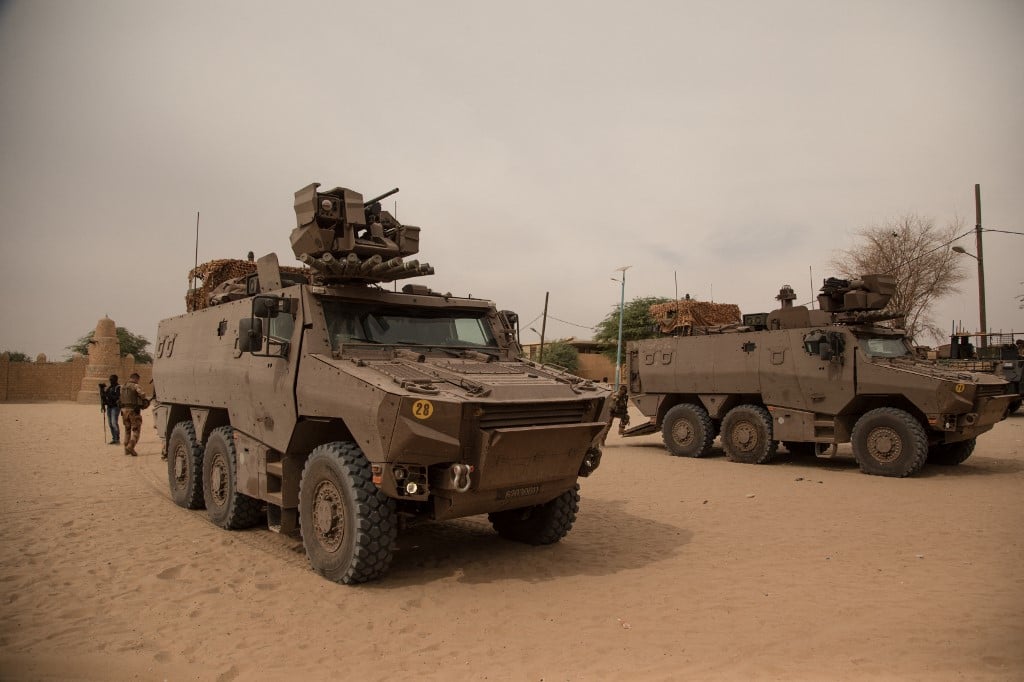 There are some 600 French troops, 11 fighter jets and one frigate currently stationed in the Middle East as part of Operation Chammal, which has been running since 2014. Their mission is to target the so-called Islamic State group through air strikes and intelligence gathering in Iraq and Syria. They also play a role in training the Iraqi national army.

France also has some 700 soldiers stationed in Lebanon, as part of a UN-backed peacekeeping force that was instituted during the Lebanese civil war as part of Operation Daman.

In recent years, it has been reported that the French military has been involved in secret operations in Egypt and Libya. The special forces are often deployed to exfiltrate officials or hostages from danger zones.

French military personnel are involved in the protection of a number of sub-saharan heads of state.

France signed a series of defence cooperation agreements with the UK in 2010, known as the Lancaster House Treaties. Prior to this Franco-British cooperation had been extremely limited since the disastrous Suez expedition in 1956, in which the two countries were humiliated by Egypt.

Following the signing of the Lancaster House Treaties, the British and French assisted each-other in Libya, Mali and the Central African Republic. A British frigate was deployed to Operation Chammal in 2015 and in 2016, a British destroyer joined a French battle group near Sri Lanka.

The countries have a strong intelligence sharing relationship and have developed somewhat of a joint nuclear infrastructure (although due to the secretive nature of this project, we cannot be sure to what extent).

How will the French army evolve in the coming years?

Among the new recruits will be 1,500 working in intelligence and 500 in cyber-defence.

Defence spending is on an upwards trajectory, with more than €39.2 billion invested in the military in 2021 – or 2.01 percent of GDP. 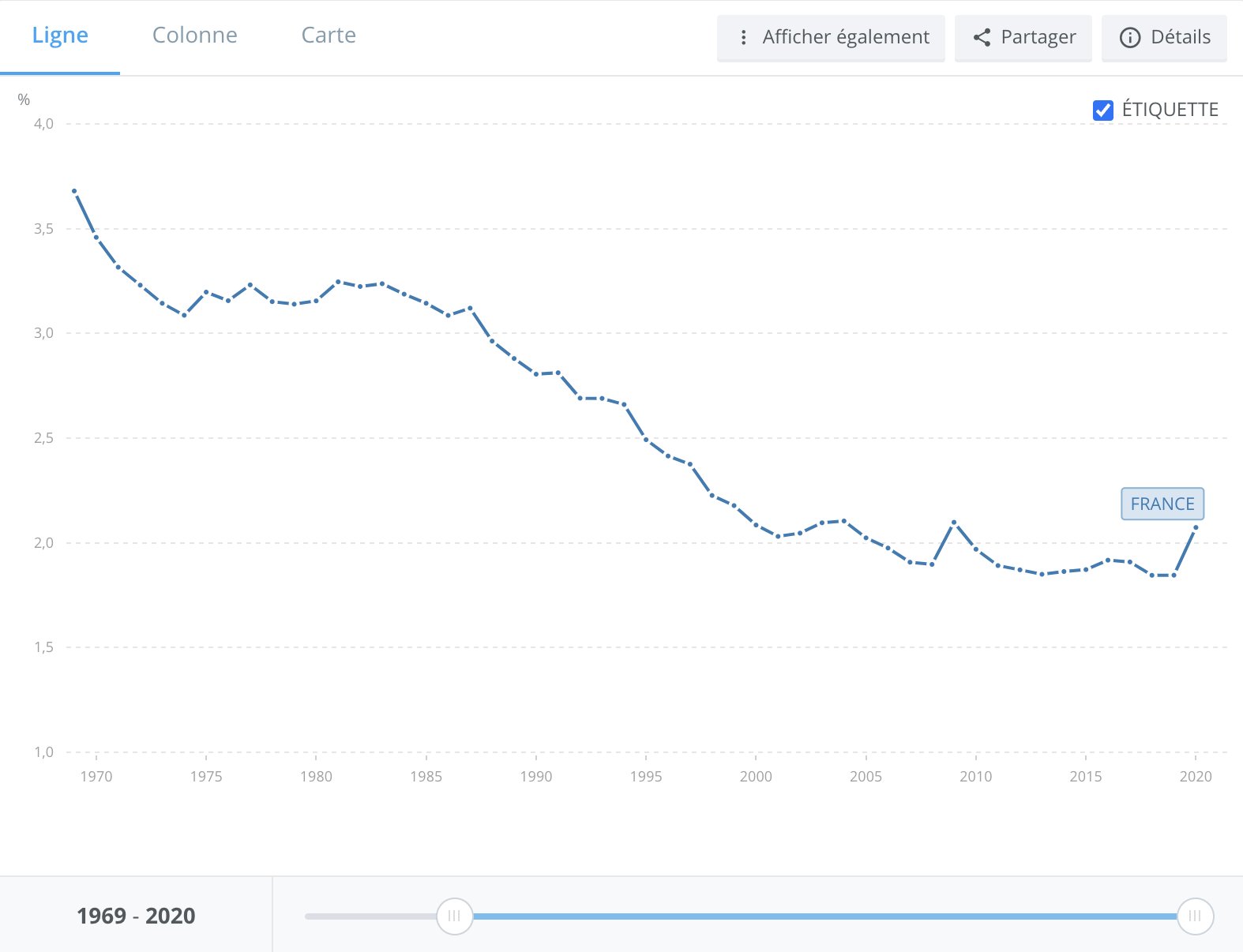 French defence spending as a proportion of GDP has increased under the presidency of Emmanuel Macron. (Source: World Bank)

“We can see clearly that France is reinforcing itself,” said Roche.