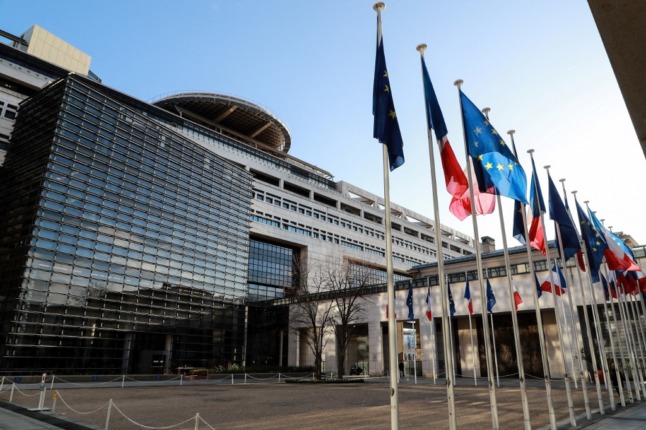 The French Economy and Finance Ministry has spent huge amounts of money during the pandemic. Has the strategy paid off? (Photo by Ludovic Marin / AFP)

In April Macron – a former Economy minister – will be defending his record in office, while his rivals will be on the attack. One thing’s for sure – an awful lot of statistics and graphs will be chucked around.

So how are things going?

Macron swept to power in 2017 presenting himself as a dynamic, young and liberalising reformer.

He pledged to cut taxes and spending, streamline public services and reform the pension system. Macron got to work on this shortly after the election, notably by scrapping the ‘Solidarity tax’ on the country’s super-wealthy (Impôt de solidarité sur la fortune or ISF). He reformed the legal code to make it easier for employers to hire and fire and cut down the country’s swollen civil service.

But then the pandemic hit.

The government created a massive package of economic aid for individuals and businesses, with the intention of keeping the economy afloat by supporting businesses and people forced to stop working during the pandemic.

In a televised address in March 2020, Macron said the government would protect workers, the health sector and businesses quoi qu’il en coute (whatever it costs).

“Macronism has evolved from a liberal political philosophy to one which has a strong interventionist role for the state,” said Luc Rouban, a political scientist at Sciences Po.

When he first took office, Macron’s economic policies had the effect of reducing public spending as a proportion of GDP – but the arrival of Covid sent it soaring to record levels. Public spending as a proportion of GDP (blue) has reached historic heights in France. Source: INSEE

Stéphanie Villers, an economist, said that the government had little choice but to intervene to save the economy when Covid hit.

“It was an unprecedented event. It was almost a war-like situation,” she said.

“Whole parts of the economic apparatus of France were quasi-nationalised. We had to intervene and were not the only country to do this. But we did spend a lot more than other countries and now have a massive public debt.”

A cursory glance at some key economic indicators suggests that the French economy is doing well.

Last month, the Finance Minister, Bruno Le Maire heralded 7 percent economic growth in 2021 as “spectacular”. More than one million jobs have been created since 2017, unemployment is at its lowest level in nearly a decade and France now counts at least 26 unicorns – start-ups valued at more than $1 billion.

A study from the Institut des Politiques Publiques released in November 2021 found that under Macron’s presidency, purchasing power for the average French household increased by 1.6 percent. This means that the vast majority of people in France, apart from the poorest five percent, are now have more disposable income at the end of the month than before Macron was elected.

Those earning less than €800 per month are around €40 worse off at the end of the year now than they were prior to 2017. The wealthiest households saw significantly greater gains in purchasing power under Macron than any other group. This graph shows that Macron’s economic policy has greatly benefited the wealthiest households in France, while the poorest 5 percent have largely lost out. Source: IPP

The most recent issue has been the post-pandemic increase in the cost of living – felt across the world as the price of raw materials and oil have soared.

The French government has made efforts to protect poorer households from increasing bills, introducing a chèque énergie to subsidise costs over Christmas and introducing a one-off indemnité inflation in 2021. More recently, it has temporarily frozen gas and electricity prices.

Although the distribution of economic gains under Emmanuel Macron has been unequal and led many opponents to dub him le Président des riches, Rouban argues that the French Left is now in difficult territory.

“The Government has intervened massively in the economy and put the Left in an uncomfortable situation,” he said. “It doesn’t have an argument anymore.”

“They will contest the government much more on cultural grounds, drawing on ideas like woke-isme than on the economic question.”

French public debt is rising and now stands at 116 percent of GDP. The public deficit stood at €171 billion in 2021 – which means the government is spending €171 billion more than it is receiving in revenue (through taxes, for example).

Although many of pandemic-related economic aid packages have now ended, the government is still offering support to certain hard-hit sectors like the tourism industry.

“Even prior to Covid, the public deficit was a real Achilles heel of the economy. And financing of the quoi qu’il en coute programme has seen out public debt explode,” said Villers. Public debt as a proportion of GDP has spiked since the start of the pandemic in 2019. Source: INSEE

Unless France reduces its enormous public deficit, it may struggle to receive financing from lending institutions, like the European Central Bank. This would make it extremely difficult for the state to pay for public services like schools and hospitals – let alone welfare payments.

“No one wants to lend you money if you do n’importe quoi with your money,” said Villers.

None of the main presidential candidates running in April’s contest have seriously argued about cutting back public spending – except Valérie Pécresse of the centre-right Les Républicains.

Pécresse, who describes herself as two thirds Merkel and one third Thatcher, has denounced the “open bar of public spending” and vowed cut 10 percent of public administration jobs as part of her effort to remedy the situation.

Inflation currently stands at 2.9 percent higher than it was one year ago. It remains to be seen whether the Pécresse plan to cut public spending as poorer segments of the populations are feeling the squeeze could be a vote winner.