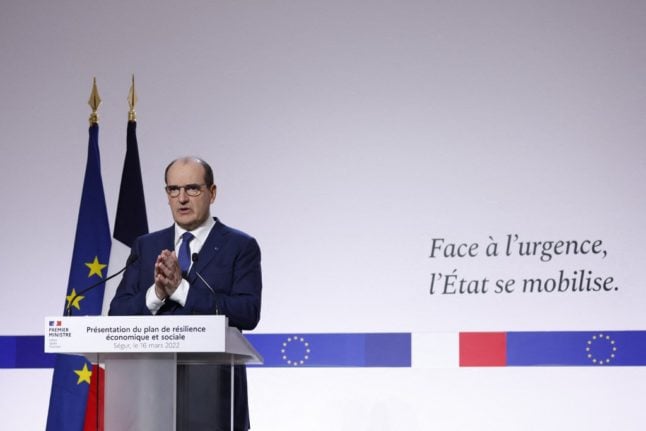 The objective of the plan is to “protect households and businesses from the shock” that is the war in Ukraine, said Castex, before announcing measures targeted towards the sectors most affected.

The idea is to support hard-hit sectors such as agriculture, haulage and fishing so that they can avoid passing on their extra costs on to consumers.

Castex had already announced a fuel rebate of 15 cents per litre for petrol and diesel, which will come into effect to the benefit of consumers from April 1st. The government will reimburse the sellers the difference. This measure has now been extended to cover LPG and commercial fuel.

For consumers, gas and electricity prices have been limited to a maximum four percent rise until the summer, and that cap is likely to be extended.

But certain other sectors will also receive extra help.

Fishing – there have already been protests from fishermen in northern France, who say that the price of fuel is so high that it is not worth taking their boats out. Castex said that the fishing industry was an “absolute priority”.

The industry will benefit from an extra rebate on fuel costs, in addition to the 15 cents per litre already in place, taking it to 35c per litre until July.

Farming – hit by a combination of the increase in fuel and animal fodder costs, the agricultural sector will benefit from four months of state aid, including a 25 percent rebate on the non-road diesel used by farmers.

There is also a €400 million package to help with the rising cost of animal feed, with full details on provision to be clarified with industry representatives in the next few days.

Agriculture minister Julien Denormandie added: “There is no risk of food shortages in France. Our agriculture and our food chain is strong, solid and sovereign.”

Transport – for the haulage industry the 15 centres per litre fuel rebate will also be extended to commercial fuel, and will continue for four months. There will be extra aid for financial losses, to be defined with industry representatives in the coming days.

Construction – already hit by rising costs for building materials, the construction sector has seen further price rises in addition to extra fuel costs. The industry will receive tax rebates and benefit from a suspension of late delivery fees.

Exporters – export companies affected by the Ukraine war will be eligible for ‘stimulus cheques’ to help them develop new markets.

Energy bills – all businesses where gas and electricity bills represent more than three percent of their turnover will also be entitled to extra help – including state backed loans, chomage partiel (furlough) payments and the postponement of tax and social charges.

Castex also announced the goal of ending France’s dependency on Russian gas and oil by 2027, with the “priority of securing next winter’s stocks, particularly via the import of liquefied natural gas”.