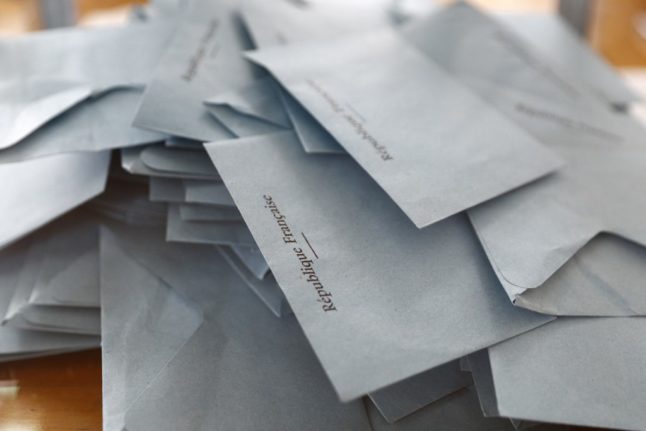 France has voted in the first round of the 2022 presidential election. We take a look at what happens next. (Photo by Sameer Al-DOUMY / AFP)

The preliminary results show that Emmanuel Macron and Marine Le Pen collected the highest share of the vote in round one, and will therefore go through to the second round run-off.

Now the first round is over, we move to round two, which is held on Sunday, April 24th.

This round features only two candidates – Macron and Le Pen – and the winner just needs a simple majority of the vote. Their first round scores are not carried over, they both start again with a blank slate in the hunt to get over 50 percent of the vote.

Polling stations in mainland France will open at 8am on Sunday, April 24th and then at 8pm a projection based on a small number of counted votes is published showing the winner.

Most registered voters vote in both rounds, but it’s possible to only vote in the first, only vote in the second or abstain completely. Some voters also cast a vote blanc as a kind of protest against the quality of the candidates.

So what happens between round 1 and round 2?

Debate – there is a live TV debate between the two finalists – that is scheduled for the evening of Wednesday, April 20th. This debate has taken place in every French presidential election since 1974, except for in 2002, when President Jacques Chirac refused to debate with far-right leader Jean-Marie Le Pen.

Media – Expect a lot of media coverage in the next two weeks, but broadcasters are required to give equal airtime to the two candidates in the lead up to the second round vote.

Campaigning – Formal campaigning restarts after round one, with the candidates taking part in rallies, meetings and walk-abouts as they try to drum up support. All campaigning is suspended on the day before the second round vote.

What about the other candidates?

The 10 losing candidates from the first round take no formal part in the election proceedings from here on in. They can, however, have an influence the second round result by calling on their supporters to back one candidate or another.

Immediately after the first round centre right Valérie Pécresse, centre left Anne Hidalgo, green Yannick Jadot and Communist Fabien Roussel called on their supporters to vote Macron in the second round. Far-left candidate Jean-Luc Mélenchon, who came third and narrowly missed out on the second round, did not call for a Macron vote, but told his supporters that “not a single vote” should go to Le Pen.

These candidates  will also be anxiously looking at their final poll scores – first round candidates who scored more than 5 percent of  the vote can claim up to 47.5 percent of their campaign expenses back from the State, those who scored less than five percent can only claim a maximum of 4.75 percent back.

Initial results show that only four candidates – Macron, Le Pen, Mélenchon and the extreme right candidate Eric Zemmour – scored more than 5 percent. Centre-right Valerie Pécresse was hovering around the 5 percent mark so she might just scrape some money back.

And what happens after the second round?

The current presidential mandate expires on May 13th, so if France has a new president the handover of power must be completed by this date. If the incumbent wins, they simply carry on, although it’s quite common for a newly re-elected president to make some changes to their cabinet at this point.

This year, the presidential elections are shortly followed by parliamentary elections, when the French go back to the polls to elect their local MP to the Assemblée nationale.

At this point the new or newly re-elected president will see whether they can command a majority in the Assemblée nationale (the French parliament) and therefore how easy it is going to be to get their policies and reforms passed over the next five years.

Like the presidential elections, parliamentary elections are held over two rounds, this time with just a week between voting – on June 12th and June 19th.

And then in either April or May 2027 we get to do this all over again with the next presidential election.