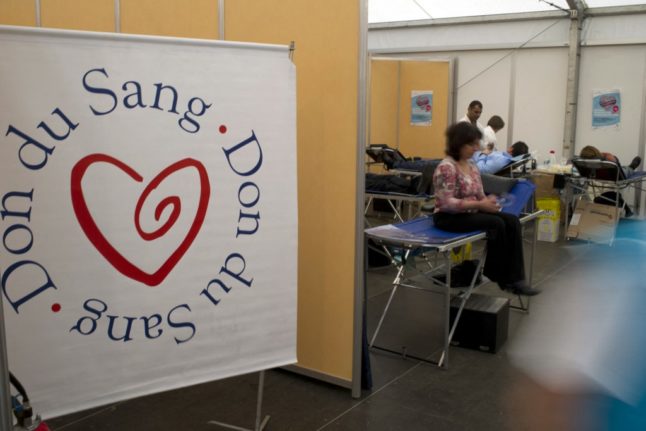 The rules on blood donation in France change this week. Photo by FRED DUFOUR / AFP

Covid rule changes – two big changes come into force on Monday: the end (for now at least) of the vaccine pass and the lifting of the mask rules in most indoor areas. Masks will remain compulsory on public transport, and international travel restrictions remain in place – full details HERE.

TV debate – French TV station TF1 is holding a special debate on the war in Ukraine featuring 8 of the 12 presidential candidates including Emmanuel Macron. Starts at 8.20pm.

Terror trial – As part of the ongoing trial into the November 2015 terror attacks in Paris, Salah Abdeslam – the only one of the attackers still alive – will give evidence about the planning of the attacks, which killed 130 people at the Bataclan music venue and Paris bars and restaurants.

Blood donors – new rules come into force that allow gay men to give blood under the same conditions as everyone else. Announced in January, the new rules do away with the ‘absurd and outdated’ rule that gay men can only donate blood if they are not sexually active.

Angoulême festival – the delayed Angoulême comic festival begins on Thursday and runs until Sunday. It’s the third largest festival of graphic novels and comics in the world, typically attracting hundreds of thousands of visitors and thousands of artists. You can find more information here.

60th anniversary of end of the Algerian war – the Evian Accords, which brought an end to the brutal and bloody conflict in Algeria, were signed on March 18th, 1962, paving the way for Algerian independence. Even 60 years on, the war remains a difficult subject in France, although Macron has attempted to bring some closure by commissioning an independent report into what he has called a ‘crime against humanity’.

Le crunch – If you’re in Paris you might notice a lot of Englishmen in town – France take on England at the Stade de France in the final match of the Six Nations rugby tournament.