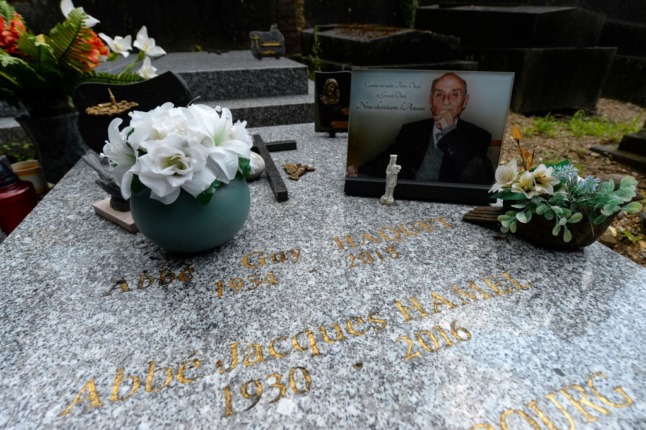 The grave of Father Jacques Hamel, killed in front of his congregation as he celebrated Mass. Photo by JEAN-FRANCOIS MONIER / AFP

Father Jacques Hamel had his throat slit at the foot of the altar while celebrating mass on July 26th, 2016, at his church in Saint-Etienne-du-Rouvray, a working-class suburb of Rouen in northwest France.

The two 19-year-old assailants, Adel Kermiche and Abdel-Malik Petitjean, also seriously injured one of the worshippers they took hostage before being shot and killed by police as they tried to leave the church.

They claimed in a video to be members of the Islamic State, which later called them its “soldiers” retaliating for France’s fight against jihadists in Syria and Iraq.

Hamel’s murder came as the country was on high alert over a series of jihadist attacks that began with a massacre at the satirical newspaper Charlie Hebdo in January 2015 and which have claimed more than 250 lives in total.

It also raised questions about the ability of French intelligence agencies to prevent such attacks, since Kermiche was wearing an electronic bracelet at the time after anti-terrorism police learned he had twice tried to go fight in Syria.

Prosecutors say that Jean-Philippe Jean Louis, Farid Khelil and Yassine Sebaihia knew about the attackers’ plan, with Jean Louis travelling with Petitjean to Turkey just weeks before the attack in an attempt to reach Syria.

They have denied the charges of conspiracy with terrorists, with their lawyers calling them “scapegoats.”

Rachid Kassim, a Frenchman who became a key IS recruiter and is the alleged instigator of the attack, has been charged with complicity in the killing by helping to choose the target and providing advice.

“Pounce on the infidels like a hungry lion pounces on its prey,” Kassim told them in audio and social media conversations discovered by investigators.

Police also say Kassim was behind the chilling murder of a police officer and his partner in front of their three-year-old son in Magnanville, a Paris suburb, just a few weeks before Hamel’s murder.

He is believed to have been killed in a coalition airstrike near Mosul, Iraq, where he lived, but is being tried in absentia since the death has not been confirmed.

Despite the absence of the main culprits, Hamel’s relatives and the victims are hoping to learn how the young men came to embrace the extremist ideology that led to the attack.

Guy Coponet, who was critically injured while being held hostage in the church, “wants to understand how these youths, barely out of adolescence, could commit such horrors,” his lawyer Mehana Mouhou told AFP.

Now 92, he plans to attend at least part of the hearings set for the next four weeks.

Catholic Church officials have launched the process to seek beatification for Hamel, a first step to canonisation or sainthood, which is currently being examined by the Vatican.

Pope Francis, who approved a fast-track process for Hamel, called him a “martyr” who died for his faith, which means there is no requirement of a proof of miracles in his case.