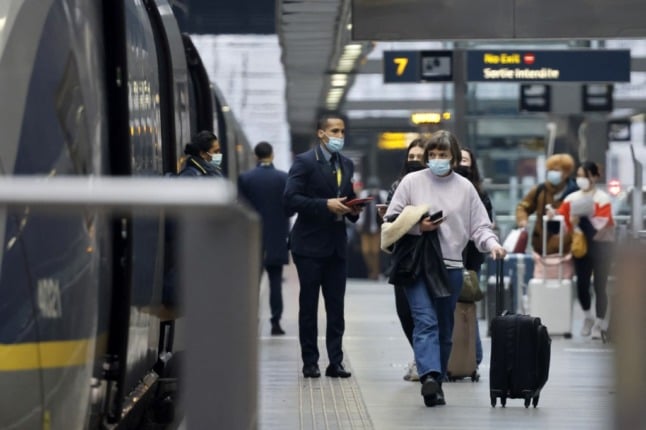 Passengers board a Eurostar train at St Pancras International station in London on December 17, 2021, the final day before new restrictions are imposed on travelers to combat the spread of the Omicron variant. - France has announced that from Saturday the obligation to justify "compelling reasons" for travel from and to the United Kingdom, with the approach of the end-of-year holidays, because of the Omicron variant, which is developing at high speed in the UK. (Photo by Tolga Akmen / AFP)

Currently arrivals from within the EU do not require a test, but travellers coming from almost all non-EU countries, including the UK, USA, Canada and Australia, need to present a negative Covid test taken within 48 hours of departure.

However on Friday the government announced it was scrapping that requirement, saying: “proof of vaccination will be sufficient to come to France whatever country you are coming from, just as it was before the spread of the Omicron variant”.

The change comes into effect at 00.01am on Saturday, February 12th.

Announcing the change, the statement from Prime Minister Jean Caxtex’s office said: “In view of the new phase of the pandemic characterised, in most countries, by the predominance of the Omicron variant and a high level of vaccination, the government has decided to lighten the health control system at the borders, particularly for vaccinated travellers.”

Travellers who are aged 12 and over, are not fully vaccinated and are coming from a country on the orange list (which includes the UK, and USA) cannot travel to France unless they have an essential reason – click HERE for the full list of accepted reasons.

Those who do qualify for travel will need to show a negative Covid test taken within 48 hours of their departure date, and quarantine on arrival in France.

A booster shot is not required to enter France, but may be needed to get a vaccine pass for entry to venues including bars, cafés and ski lifts.

EXPLAINED How does the French vaccine pass work?

The French change comes one day after the UK’s travel rules also changed, lifted the requirement for post-arrival tests for fully vaccinated travellers.

Vaccinated travellers can now travel between France and the UK with no testing required at all.

France on Friday also announced an easing of its mask rules and a more relaxed health protocol for schools, in addition to the planned changes to health rules that come in next week.

The next ‘mass mobilisation’ in the ongoing battle against pension reform is scheduled for Tuesday, February 7th, and will be followed by another one on Saturday, February 11th.

Tuesday’s mobilisation is supported by all eight French trades union federations, which means that support is likely to be high and disruption severe on certain services.

It will come as French lawmakers debate the bill in the Assemblé Nationale.

Workers in essential services such as transport must declare their intention to strike 48 hours in advance, allowing transport operators to produce strike timetables, which are usually released 24 hours in advance.

We will update this story as new information is released.

READ MORE: ANALYSIS: Who is winning the battle over French pension reform?

Representatives from SNCF said that they expect that French national rail services will be “heavily disrupted” on Tuesday due to strike action. Only half of France’s high-speed TGV trains will run normally on Tuesday February 7th, representing less disruption than the day of action on January 31st where only one in three TGV lines ran according to normal operating times.

As for low-cost Ouigo trains, two out of five trains will run across the country on Tuesday.

Intercity and regional TER trains operated by the SNCF will also see services disrupted on Tuesday.

Regional TER trains will run three out of 10 trains on average on Tuesday, and services will be heavily disrupted across all French regions.

As for daytime intercity trains – SNCF will run two return trips on the Paris-Limoges-Toulouse, Bordeaux-Marseille and Nantes-Lyon lines. It will run one return trip on the Paris-Clermont line. No trains will run on the Nantes-Bordeaux and Aubrac (Clermont-Béziers) lines.

Travellers can expect normal services on the Paris-Nice nighttime intercity line. However, no trains will run on the Paris-Briançon, Pyrenean (Paris-Lourdes/La Tour-de-Carol) and Occitan (Paris-Toulouse) nighttime lines.

You can check to see if your journey will be affected by strike action by going to the SNCF website here – updated information will be available at 5pm on Monday, February 6th.

French national rail services told BFMTV that they recommend that travellers either cancel or postpone their trips for Tuesday.

International rail services will also be impacted by Tuesday’s strike action. The Eurostar will run three trains out of four, and Lyria (which connects France to Switzerland) will see about half of services run as scheduled. Thalys services will be “slightly disrupted”. You can find the list of cancelled Eurostar trains here.

During the day of action on January 31st, 36.5 percent of railway workers went on strike, compared to 46 percent on January 19th.

In addition to Tuesday’s strike action, two of the above unions, CGT and Sud Rail, have also called on workers to strike on February 8th. However, as of February 2nd, the other two primary unions had not made any calls to take part in Wednesday’s action.

Traffic will be severely disrupted on the Paris Metro system, with several lines only running during peak hours and many stations across the city were closed. Buses will experience slight disruptions, and tramline services will run as normal.

Other cities including Marseille and Lyon will likely see a repeat of severely disrupted bus, tram and Metro services.

In Lyon, metro lines A and C will not run from 5pm to 6pm. As for other lines (A, B, C, and D), they will run at slower intervals. Tram services will be partially impacted, with lines T1 and T2 running at a frequency of six to seven minutes, line T4 running every eight to 10 minutes, and line T5 only running every 15 minutes.

As the third day of mobilization against the pension reform is coming up on February 7, Lyon’s public transport system (TCL) announced its traffic forecasts on February 5.

In Bordeaux, almost all bus and tram lines will run normally on Tuesday, with just the tram C running slower than usual at every 7.5 minutes.

On Sunday, ahead of Tuesday’s strike action, France’s Civil Aviation Authority asked the Paris-Orly airport to cancel one out of five flights.

The leading civil aviation union, USACcgt, had called on “all DGAC (French civil aviation authority) and ENAC (National school of civil aviation) staff to go on strike en masse and take part in demonstrations” on February 7th, according to reporting by Le Parisien.

The CGT union chapter representing port and dock workers called on them to walk out on February 7th and 8th. Industrial action will likely have a heavy impact on ports and docks in the Seine-Maritime area (specifically Le Havre and Rouen), according to Paris-Normandie.fr.

Typically strike action in this sector impacts commercial ports rather than ferry ports.

Tuesday’s strike will take place during the first round of winter holidays – so students in the Zone A (Besançon, Bordeaux, Clermont-Ferrand, Dijon, Grenoble, Limoges, Lyon, Poitiers) will already be off school.

You can find out more information about France’s school zones here.

Nevertheless – one of the major unions representing teachers, Snuipp-FSU said in a statement that they hope to see an “amplification” of previous walkouts, as they called on teachers to walk out on February 7th.

In addition to industrial action by teachers, several student unions, like the “National Student Movement” (MNL), representing high school students have made an effort to mobilise French youth across the nation, with some blocking the entrance to their high schools on strike days. According to the Journal des Femmes, the MNL has called on high schoolers across the country to walk out again on the 7th.

BFMTV reported on January 31st that a walkout was scheduled for seasonal workers for approximately one hour and thirty minutes on Tuesday, February 7th. This means that in some resorts, ski lifts and stores could be closed.

READ MORE: What to expect from strike action in France during the February school holidays

The two unions that represent more than 90 percent of workers in ski resorts have also called an ‘unlimited’ strike which began on January 31st, meaning further actions could come later in the month as well.

French refinery workers have threatened to strike for a 72-hour period beginning on February 6th. Union representative, Eric Sellini, told AFP that these actions could result in a “lower throughput” for petrol and a “stoppage of shipments.”

This could mean that there may be shortages of petrol and diesel at some filling stations if the blockades are successful in stopping supplies leaving the refineries.

The mobilisation on January 31st saw a significant number of refinery workers walk out – between 75 to 100 percent at some refinery and oil depots, according to the union CGT.

Workers in the energy sector (electricity and gas), primarily represented by the union FNME-CGT, have announced plans to strike from February 6th through 8th.

The day of action on January 31st had 40.3 percent of employees at EDF (France’s national energy provider) walk out, in comparison to 44.5 percent on January 19th.

Some workers in this sector have taken what they call “Robin Hood” actions to “distribute free electricity” to hospitals, schools and low-income housing areas.

On January 31st, striking workers brought about significant load reductions in some power plants across the country – approximately 3,000 MW according to La Depeche. However, these reductions in power reportedly did not lead to any power cuts on the 31st.

The demonstration in Paris will begin at Place de la Bastille at 2pm and it will walk toward Place de l’Opéra.

In Lyon, the route for the demonstration has already been decided, according to Lyon Capitale. It will begin at 12pm in front of the Manufacture des Tabacs. The procession will move toward the Place Bellecour.

In Bordeaux, some roads may be closed around the city centre, as the demonstration will begin around noon and head off from the Place de la Bourse.

Unions are hoping for a similar turnout on February 7th.

The above information relates to February 7th only. Unions have also called for more walkouts on February 11th.

Other unions have also declared ‘unlimited’ strikes, so there could be disruptions on these services on other days – these include ski lift operators and truck drivers.