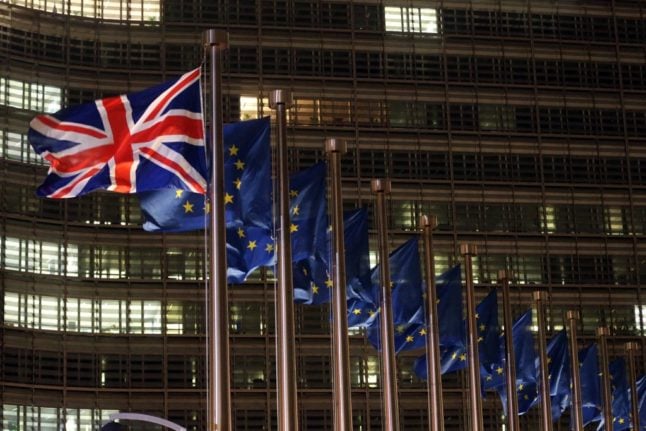 It wasn't just the flags that needed to be rearranged after Brexit. Photo: François Walschaerts/AFP

For Brits who lived in France before December 31st, 2020:

All British nationals who were living in France before December 31st 2020 have to apply for the residency card known as the carte de séjour – even if they have been here a long time or are married to a French person.

The only exception to this is Brits who have dual nationality with an EU country eg France, Ireland etc.

The deadline to have made the application is September 30th, 2021 (extended from June 30th) and you can find out how to apply HERE.

Some Brits already applied  for a carte de séjour before 2020 on the basis that they were EU citizens. However these cards are no longer valid for Brits and have to be exchanged for a new carte de séjour – this card is a specific one for Brits covered by the Withdrawal Agreement.

You make the application to exchange on the same online portal as those applying for a new card and it is a fairly simple swap process. Full details HERE.

Not necessarily. Virtually everyone who is a permanent resident in France must fill out the annual tax declaration – this applied to British residents before Brexit and getting a carte de séjour does not change that. Whether you pay tax or not depends on your sources of revenues and whether they are taxed in the UK or not.

You can find full information in our tax declaration guides HERE.

The Withdrawal Agreement carte de séjour is for people whose main home is in France. Many Brits with property in France have got used to splitting their time roughly 50/50 between France and the UK, but the British government’s decision to end freedom of movement for its citizens means that people now need to make a decision on which country is their place of residence. Here are some things to consider when making that decision.

“Tax residency” – the threshold at which you can be liable to pay tax in a country – is not the same as having residency status via a carte de sejour.

I’m unemployed so I can’t apply for residency

If you are unemployed and registered at the Pôle emploi (the French unemployment office) you can still apply as a jobseeker for a post-Brexit carte de séjour.

If you have never worked in France you apply as “economically inactive” – the category which includes pensioners. Depending on how long you have been in France, you may need to show some proof of your resources (more details below).

Only people who have been in France for less than five years and are not working need to supply proof of health cover and it is sufficient to be registered within the French health system, no additional health insurance is required.

This confusions seems to have arisen due to an early mistranslation in the English-language version of the online portal for residency applications. France’s state health insurance system is known as Assurance maladie, and the English-language portal used the literal translation of this – health insurance – which lead many Brits to believe that they needed additional private insurance. In fact, being registered in the French system and having a carte vitale is sufficient.

This has probably been the biggest worry for many Brits, especially as the requirements were not finally clarified until the residency application site went live in October 2020.

The majority of people do not have to provide proof of their financial resources, but one group does – those who have lived here for less than five years and are not working (eg pensioners).

The French have lowered some of the standard income requirements and allowed couples to use joint resources to apply. In cases where people are under the income threshold, assets such as mortgage-free property will be taken into account.

French bureaucracy has a bit of a reputation for being slow and cumbersome, but Brits who have already applied under this system have been struck by its – relative – simplicity and speed. The Interior Ministry has scaled back the number of supporting documents required and set up an online portal specifically for Brits.

Read the experiences of people who have used the system HERE.

The above answers all relate to people who were living in France prior to December 31st 2020, for people moving after that date, click HERE.

But what about non-residents – British second-home owners, Brits who do short-term work in Europe or just those who enjoy lengthy trips to France?

There are also some persistent myths surrounding these groups

I live in the UK but own property here, so I don’t need a visa for visits

This is a common trope, but unfortunately simply owning property in France does not give you any extra rights when it comes to border controls and immigration rules.

British second-home owners are now covered by the 90-day rule, which limits visits to 90 days in every 180 (either in one block or several shorter visits).

Anyone who wants to stay longer than that without taking up residency needs a visa. The only exception to this is Brits who have dual nationality with an EU country.

You can find a full explanation of the 90-day rule HERE and a guide to getting a visa HERE.

Visas are required even for people who don’t intend to work here if you want to stay for longer than 90 days out of every 180. There are various different types of visa, but second-home owners who simply want to enjoy lengthy visits to their property would probably want a visitor visa.

I need a work permit for work undertaken in France, even if it’s only for a few weeks

Not necessarily. If you intend to work in France without taking up permanent residency – ie as a freelancer, contractor or taking business trips or cultural tours – you may need a work permit, but there are some sectors that are exempt from the requirement.

If you work for less than 90 days out of every 180 in France then you don’t need a visa, but if you work in multiple countries bear in mind that the 90-day limit applies to the whole EU Bloc, not just France, and each EU country has different visa and work permit requirements.

Find a full explanation of who needs a work permit in France HERE.

If you are visiting France as a tourist or second-home owner then you can continue to drive on your UK licence and don’t need an International Driver’s Permit.

For residents in France who have a UK licence the situation is more complicated. This group will have to swap their licence for a French one by the end of 2021, but at present an impasse on reciprocal agreements to swap licences between the French and British governments mean no applications for a swap are being accepted.

Residents can continue to drive on a UK licence in the meantime, so most people just need to wait and hope an agreement is reached soon. For those whose UK licence has expired or is about to expire, however, the situation is grim with no immediate resolution in sight, despite pleas and petitions to the British government.

An International Driver’s Permit is not a substitute for a licence, and cannot be used if the licence it is attached to is expired or no longer valid.

If you have questions on Brexit, head to our Dealing with Brexit section or email us at [email protected]