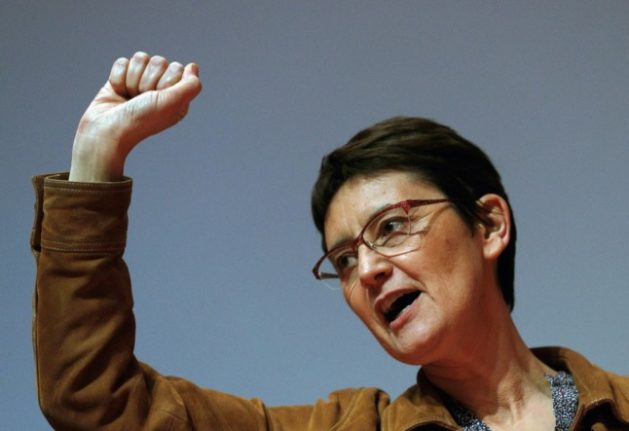 Nathalie Arthaud is running on a Trotskyist platform at the 2022 French presidential election. (Photo by STEFANO RELLANDINI / AFP)

She is not a full-time politician

At 51-years-old, Arthaud is a full-time teacher at a high school in Seine-Saint-Denis. In her free time, she serves as the national spokesperson for far-left political party Lutte ouvrière.

She was its presidential candidate in 2012 and 2017 and is stepping up again this time around.

She thinks the communist party is not radical enough

Arthaud said she jointed Lutte ouvrière (Workers’ Struggle) because the communist party had “become Stalinist and a party of government that has adapted to the capitalist system”.

The French Communist Party currently holds a smattering of seats in the French parliament, while around 60 communes are run by Communist mayors. Lutte ouvrière holds no parliamentary seats.

She is a revolutionary steeped in academia

She has even written a book, called Communiste, révolutionnaire, internationaliste !

Her website makes heavy reading and is organised thematically into grand ideas (imperialism, protectionism, left and right in the service of capitalists and freedom of movement) rather than concrete policies.

She identifies as a Trotskyist.

Arthaud’s previous performance in presidential elections has been poor, which is forgivable given that she is trying to sell a particularly radical message and has to give up a good chunk of time to teaching her students.

In the previous two elections that she competed in, she won less than 1 percent of the vote both times around – but least she was able to gather the necessary parrainages (she also managed this for the 2022 contest).

READ MORE What is ‘parrainage’ and how does it affect candidates

The only time she has ever been elected was as a municipal councillor in Lyon in 2008 – a post she held until 2014.

Arthaud is no fan of Emmanuel Macron and took part in the marée populaire (popular wave) protests against his newly-won presidency in 2017. She also voiced her support for the Yellow Vests movement.

In a February interview with BFMTV, she described Macron’s record as president as “devastating”.

“You have seen the health catastrophe, the state of hospitals, soaring inequality, precariousness that continues… at the other end what do we see? We see billionaires that have doubled their wealth,” she said.

“The big bosses can congratulate themselves, they are happy, that is obvious. But when you go to the working class, we can only be very angry.”