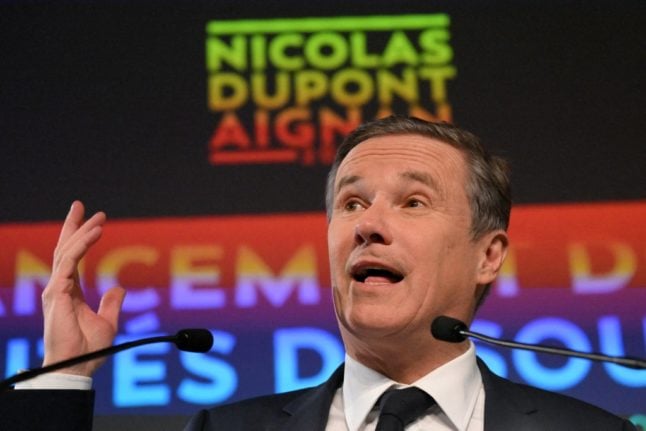 1. He is an isolationist

Nicolas Dupont-Aignan, sometimes referred to by the acronym NDA, is the president of the Debout la France (France Arise) party, which is seeking to remove the country from the “tentacles of the EU and NATO”.

While he has voiced his opposition to “Frexit”, the 61-year-old has described Maastricht, Amsterdam, Nice and Lisbon treaties, which enshrined greater EU integration, as “scandalous treason.”

He would like to radically restructure the EU to give member states greater autonomy. Dupont-Aignan has previously voiced his support for withdrawing from NATO.

Dupont-Aignan received a public endorsement from Nigel Farage, a eurosceptic politician from the UK, during the 2014 EU parliament elections.

2. He doesn’t want to invade Belgium

Dupont-Aignan wants to raise defence spending to 2.5 percent of GDP and recruit a further 40,000 soldiers to bring the total number of servicemen up to 250,000 by 2027.

He has sat on various defence and foreign affairs committees as an MP.

During the 2010-11 political crisis in Belgium, he voiced his support for an idea known as Rattachisme – which advocates French-speaking parts of Belgium seceding to become part of France.

“I am not seeking to invade Belgium,” he later clarified to the JDD.

3. He performs well in local elections

Although he has yet to win more than 5 percent of the vote in a presidential election, Dupont-Aignan has a strong electoral record as a local politician.

Dupont-Aignan is a superstar in the commune of Yerres to the southeast of Paris, where he served as mayor between 1995-2017, winning three elections with more than 75 percent in the first round. During the 2017 presidential election, he was the top polling candidate in the commune.

His campaign website claims he was “the best elected mayor in France”.

Dupont-Aignan proved himself an effective local administrator cutting the commune’s debt by close to half over a 20-year period and winning support for his environmental and crime-fighting policies.

From 1997-2017, he won successive parliamentary races as an MP for the Essone département, frequently winning an absolute majority in the first round. Prior to his election, the seat had only ever been held by candidates from the Socialist party.

Dupont-Aignan has been decorated by the French animal rights organisation, la Fondation 30 Millions d’Amis, for his policies in favour of animal protection.

As Mayor of Yerres, he launched a number of initiatives including the construction of a refuge for stray cats, the development of natural spaces for Scottish cows and the subsidisation of a dog shelter. He also created a new post for an official charged with defending animal rights.

“Long considered as simple objects, animals are still too often victims of intolerable treatment,” reads his campaign website. As an MP, he has pushed for bans on slaughter without stunning, for better regulation of abattoirs, a ban on horse meat and a ban on animal shows at circuses.

Dupont-Aignan has been a fervent critic of the government’s Covid policy, voicing his opposition to the vaccine pass.

“What is crazy is that in a democracy like France, you can vote in the middle of the night for a law that will not resolve anything as far as health is concerned,” he said.

In February, he told RTL that vaccinating young people was “totally useless”.

“We have a government under the grip of money and conflicts of interests… We are in a country where the pharmaceutical lobby has influenced a government.”

Dupont-Aignan has already had Covid but has refused to say whether or not he has been vaccinated.

A number of his campaign staff resigned in December after revelations that he had continued to hold meetings despite having Covid.