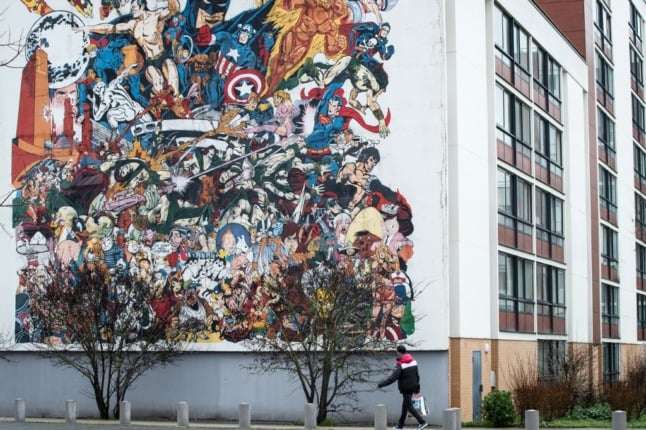 The rescheduled comic book festival will be held in Angouleme. Photo by JOEL SAGET / AFP)

Novavax roll-out – The French government has said that the Novavax vaccine will be made available to the public from the first week of March. It has only been approved for use as an initial series of two jabs, for people over 18. To hold a valid vaccine pass, you would still need to get a booster with either Pfizer or Moderna. You can find our more about the vaccine HERE.

Inflation bonus sent – Retired people whose pensions amount to less than €2,000 per month (post-tax) are eligible to receive France’s inflation bonus, which was brought in to compensate for the effect of inflation on purchasing power. Pensioners are the last group to receive the bonus, and should do in the first week of March (at the latest).

Cigarettes get more expensive – Cigarette packets are set to become marginally more expensive with France as the government hikes taxes on manufacturers, who in turn hike prices on their products. The increases are marginal – a 20-cigarette packet of Maya Green Spirit for example will cost €0.10 more from March 1st.  France has among the most expensive cigarettes in Europe.

Restaurant voucher scheme extended – March 1st was supposed to mark the end of the €38 per diem ticket restos limit, with the ceiling set to return to €19. But the government has decided to extend the €38 ticket restos initiative until June, as a way to support the country’s battered hospitality sector.

New service to mediate alimony payments – In the case of separation or divorce, both parents in France still have a legal duty to feed, clothe, house and educate their children. One parent may be ordered to make alimony payments fixed by a judge. The non-payment of such funds is a common source of family disputes. From March 1st, all such payments will be made via a new body called the Agence de recouvrement et d’intermédiation des pensions alimentaires which will in theory better enforce the legal requirement to pay up.

School holidays end in Paris – Schoolchildren living in Zone C, which includes Paris, Créteil, Versailles, Montpellier and Toulouse go back to school on Monday, March 7th. Those living elsewhere in the country have already returned to class.

Covid rules relaxed? – Various government figures have suggested that the obligation to carry a vaccine pass to enter various venues as well as the requirement to wear a mask in certain spaces (such as work places and public transport) could be scrapped from mid-March. This is dependent on the evolution of the pandemic itself – you can read more about that HERE.

Angoulême comic festival – After being rescheduled due to the Covid pandemic, the Angoulême International Comic Book Festival will go ahead from March 17-20 this year. It is the third largest comic book festival in the world, typically attracting hundreds of thousands of visitors and thousands of artists. You can find more information here.

60-year anniversary of Evian accords – On March 18th 1962, the Algerian War of Independence effectively came to an end with the signing of the Evian Accords. The historic agreement paved the way for full independence for the former French colony. In 2017, while on the campaign trail, Macron described French colonisation of Algeria as a “crime against humanity.” The 60-year anniversary will likely be marked with some kind of official ceremony.

Le crunch – The French men’s rugby team will play England in at the Stade de France on the final weekend of the Six Nations tournament. French rugby fans refer to this fixture as ‘le crunch’. Expect a lively atmosphere in the French capital and other parts of the country on March 19th – and some terrible hangovers the next day.

Journée internationale de la Francophonie – As we have often noted, the French are fiercely protective of their language. March 20th marks International Francophonie Day, an initiative that aims to promote use of the French language across the globe.

Clocks change – The clocks move forward one hour as France enters daylight saving time at 2am on Sunday, March 27th.

Campaigning begins – You may think campaigning for the presidential elections has been going on for months, but the official election campaign only begins on March 28th.

Post-Brexit marriage rules – EU spouses of UK nationals will be subject to the full visa process if they wish to move to the UK, which includes fulfilling qualifications around language, skills and sufficient financial resources. Those who don’t meet the criteria may not be allowed to enter, despite being married to a Briton, from March 31st. For full details click HERE.

Trêve hivernale ends – The period, known in France as la trêve hivernale, during which landlords are not allowed to evict a tenant comes to an end on March 31st.

Macron bonus deadline – March 31st marks the deadline for businesses to pay the so-called ‘Macron bonus’ to employees. These payments are not obligatory, but were brought in in 2019 as a response to the yellow-vests movement. Last year close to 4 million people were paid a €506 bonus, but payments can reach up to €2,000.