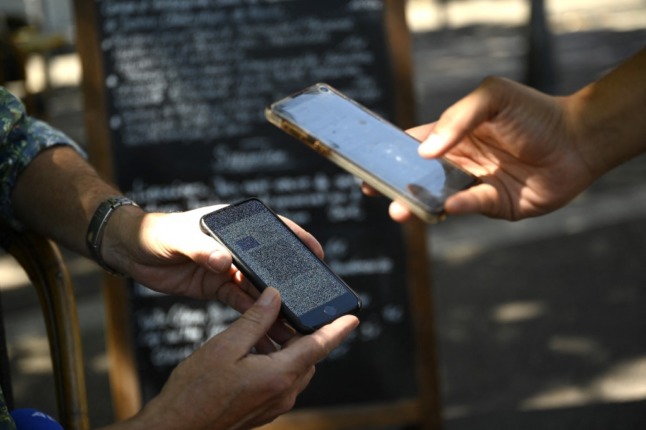 Since early August, France has required visitors to a range of venues including cafés, bars, museums and tourist sites to show a health passport in order to be granted entry. The passport can display one of three things – fully vaccinated status, recent recovery from Covid or a recent negative Covid test.

For those vaccinated in France access to the passport is easy – either via the TousAntiCovid app or through showing a paper vaccination or testing certificate.

But what about tourists or visitors who were vaccinated in countries other than France?

We asked readers of The Local to share their experiences of accessing and using the health passport in France.

Health passport venues accept proof of vaccination or testing either on paper or through the French tracker app TousAntiCovid.

However, a paper certificate needs a QR code on it, so that it can be scanned by employees. Vaccination cards with no code cannot be used for this purpose, and although some venues have reportedly been happy to accept them, it does not fall under an officially accepted proof.

READ ALSO How can people who cannot be vaccinated for medical reasons use France’s health passport?

Since the beginning of July, France has been part of the EU digital passport scheme.

Slightly confusingly, the EU’s passport is not a separate document or a different app, it just means that countries within the EU have coordinated their vaccination codes so that a scanner in France can read the QR code on a vaccination certificate issued in Spain, Sweden or Italy.

The EU-wide scheme was originally targeted at travel, allowing vaccinated people to travel freely within the Bloc, but visitors who were vaccinated in an EU country reported that their codes worked with the French health passport.

None of our survey respondents who had been vaccinated in the EU or Schengen zone reported problems using the health passport.

Carsten Boerner, from Germany, added: “The German covpass was accepted.” Visitors from England and Wales

The UK is no longer in the EU, but France has agreed to recognise the vaccination codes used in the NHS app. This means the NHS vaccination certificate can be used for the French health passport simply through scanning in the QR code.

The vast majority of our survey respondents from England or Wales reported no issues with using the French app.

Sandra Colman is typical of many when she said: “I had no problems. I showed vaccination certificate at hotels and restaurants. After having a test before my return to UK, I showed the negative test result instead – both were acceptable.”

Anyone having difficulty uploading their English or Welsh certificate into the French app can read our troubleshooting guide here.

However, the NHS app is only used in England and Wales, meaning that people vaccinated in Scotland and Northern Ireland fall under the regime of ‘non-EU’ as outlined below.

Visitors from non-EU countries (including Scotland and Northern Ireland)

People vaccinated outside the EU have a more complicated journey to the health pass, since they cannot simply scan in codes from their vaccination certificate to the French app.

They need instead to acquire a French vaccination code and the route to obtaining this has changed several times in recent weeks.

An online portal for applications to obtain a French vaccine code has been set up and since August 27th it is accepting applications from non-French citizens – full details of how this works HERE.

Readers reported mixed success rates in using these systems, although many reported that their original vaccine cards were accepted at bars and restaurants without having to use the app.

Gary Mofield, who arrived from the USA, said: “My local pharmacy did it for me. It’s fabulous. No problems whatsoever, I use it everyday.”

Denise and Jim Macauley also for the code after arriving in France. They said: “We got it on our first day in Paris. We went to the Hôtel Dieu hospital near Notre Dame during regular business hours and they converted the code for us.”

Edwina Shulman said: “Got my passe sanitaire at the first pharmacy I went to – the pharmacie de la cathédrale in Nice. It took 10 minutes and was free. Used it in France and Italy with no problems.”

Not all pharmacies are able to issue French codes, and some have recently changed their policy on this, although others continue to issue codes to visitors even since the introduction of the new email system.

The email system, introduced in mid August, in intended to allow visitors to apply for their codes before arriving in France, to spare them a trip to the pharmacy.

But readers have reported mixed success with using it.

Please note that the system has changed since this article was written, so new applications will not use the email system described below.

People who applied soon after the launch often received their codes quickly, but in more recent days the system appears to be struggling to keep up, and many people have reported long waits to get their codes.

Tracey Anne Lesley, who was vaccinated in the United Arab Emirates, said: “I applied through the email address on august 10th with with tickets, passport, vaccine certificate etc but heard nothing since the original email acknowledgement.”

Claire Letham, who was vaccinated in Malaysia, had a similar experience, saying: “I sent through details to the email, there has been no response other than to say they have received my email.”

Kayanne Anderson, from the USA, said: “We applied for the pass by email on August 10th supplying correct documents and form. We have not received our passes though we did get an automatic acknowledgment of the receipt of our applications.”

However she added: “We have been successfully using only our printed CDC card in restaurants and on trains.”

Fellow American Katherine Ramsay reported a similar experience, saying: “My son and I separately emailed our documents to the consulate as directed on August 10th, but neither of us ever heard anything back other than a confirmation that they had received our emails.

“But we have not (yet?) had any problem using our CDC paper cards to eat in restaurants (other than at burger chain Quick – but even they let us take the food with us to eat outside) or to visit the places we want to go.”

Several visitors reported successfully using CDC cards, but readers should take note that this is not within the government rules, so bars and restaurants are not obliged to accept American vaccination cards.

As with other non-EU visitors, those vaccinated in Scotland and Northern Ireland – who cannot use the NHS app – reported mixed results in converting their vaccine certificates.

Elizabeth Prosser, from Scotland said: “It was very easily obtained in a pharmacy in Nérac. Details were entered from our NHS Scotland vaccination certificates and all completed in 15 minutes.”

However Richard Robinson, also from Scotland, reported: “I tried the pharmacy but they said to come back when they’d figured out the system. So we followed The Local advice and emailed documentation to the government email address. Receipt confirmed 10 days ago but nothing since.”

The Local has contacted the foreign ministry to flag up issues using the email addresses for visitors from outside the EU, and asked for guidance for those who are still waiting for a reply.

But feedback from readers suggests that for those who are still waiting for a code on arrival in France, many pharmacies are still willing to provide French codes. You can find more detail on how to do this HERE.

The other option is to get a test while in France which can be used with the health pass – full details HERE.

Many thanks to the several hundred readers who shared their experiences, we will update our Travelling to France section as soon as we have more information on the issues raised.