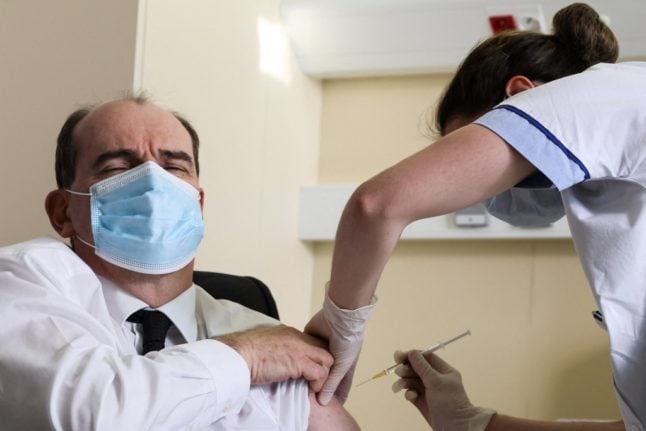 Prime Minister Jean Castex got his AstraZeneca injection  on March 19th in order to renew the confidence in the vaccine. Photo: THOMAS COEX / POOL / AFP

When French President Emmanuel Macron and his government launched the Covid-19 vaccination programme back in December, they worried about vaccine scepticism.

As polls showed that 60 percent of the population might refuse the vaccine, authorities wanted to avoid fuelling fear.

But three months later, the problem is supply, not demand.

When the website for making online appointments went live, it crashed under the high level of traffic. Doctors and pharmacies say unannounced visitors daily turn up to see if perhaps they can benefit from ‘leftover’ doses and French social media is full of people complaining that they are unable to get an appointment, while the French press rages at the slow vaccination rate.

In the country’s Ehpad nursing homes 91 of residents have been vaccinated, compared to 93 in the UK and 1.5 million people have signed up to waiting lists to get the jab at their local pharmacy as soon as an appointments becomes available.

This begs the question: Are the French really as vaccine-sceptic as they say?

‘The French are always sceptical’

“You can’t believe the polls about French scepticism about anything,” Tom Forth, a British data scientist, told The Local.

Forth, who has lived and worked in France, recently wrote a blogpost about what he called the French “miserabilism”, a concept he said explained the high level of French vaccine scepticism expressed in the polls.

“Generally the French express their scepticism much more readily than most other countries,” Forth said.

France tends to trail in polls tracking things like comparative happiness levels across Europe, while French presidents tend to get low approval ratings compared to other countries.

READ ALSO: Why I love the French habits of scolding and complaining

Back in the early stages of the vaccination scheme, several polls indicated that most of elderly nursing homes (Ehpad) residents in France – the first on the vaccine priority list – were reluctant to get the Covid injection. Only between 25-31 percent of the elderly said they intended to get the jab in some establishments.

In the end, 91 percent of all Ehpad residents in France have so far been inoculated with at least one dose, according to government data.

“We have a tendency to caricature sceptics as conspiracy theory believers,” Antoine Bristielle, a public opinion researcher with the Jean-Jaurès Foundation and the author of the newly published book À qui se fier (Who to trust), told The Local.

Bristielle has previously warned about giving too much weight to France’s anti-vaccine movement, which constitutes between 5 and 10 percent of the population.

The remaining sceptics – a group that has varied in size from poll to poll dropping from around 60 to 40 percent since the vaccination scheme began – are reluctant, but on the fence.

“They can be convinced,” Bristielle said.

Since France temporarily suspended the AstraZeneca vaccine alongside several other countries while awaiting the green light from the European Medical Agency (EMA), the confidence in the Anglo-Swedish firm’s product appeared to have plunged.

Last week, 56 percent of the people asked told pollsters they did not want AstraZeneca, even if 70 percent agreed that the government was right in suspending the vaccine.

Still, those eligible keep turning up for the vaccine, as shown in the graphics below:

France is at present only vaccinating those in high risk groups – over 70s, people with serious health conditions, health workers and people aged 50-74 with a medical condition, so this picture may change as younger people become eligible.

Bristielle had expected a high uptake among the country’s elderly, he said, who are relatively pro-vaccine compared to the rest of the population.

Young French people are the most vaccine-averse of all. But few of them are staunch anti-vaxxers, they just worry about the side effects, Bristielle explained.

Many young people in France perceive Covid-19 to be a virus that is dangerous only to their elders, and perceive the remedy as more risky than the disease itself.

To convince them, they need to see that “the benefits outweigh the risks,” Bristielle said, that “other countries lift lockdown, and that their family and friends are vaccinated and feel fine.”

But in order for that to happen, France needs to mass-vaccinate.

Was the sluggish start helpful?

As France has entered a third lockdown – albeit only in some areas and a ‘light’ version of the former ones – the hope is that the vaccine can be the game changer that relieves pressure on the already strained hospitals as Covid cases spiral.

So far, France has distributed some 10.8 million doses in total, according to the latest government data, compared to the UK’s over 30 million.

In total, 9.88 percent of the French population has received at least one dose on March 23rd, compared to 54.4 percent in the UK. (However the two countries were on a similar level for second doses, the rate in France being 3.74 percent and the UK’s was 4.8 percent.) Macron, who has taken fire for being the man in charge of a sluggish vaccination campaign, has vowed to speed up the process by opening 35 mass vaccination centres.

Some have argued that the cumbersome vaccination process helped boost confidence in the vaccine, albeit unexpectedly, by making the French want something that was outside their reach.

But immunology specialist Françoise Salvadori, who co-authored the 2019 book Antivax, which traces anti-vaccine sentiment in France and the West since the 18th century, argued that the slow-paced start was counterproductive.

“It lacked enthusiasm,” Salvadori told The Local. “It was like all they cared about was to avoid panicking people.”

Salvadori’s co-author, science historian Laurent-Henri Vignaud, told the Guardian back in January that there is “a very big difference between what the French say and what they do.”

Lessons from the past

Salvadori agreed that the French vaccine-scepticism is “without doubt exaggerated,” but added that “it’s very difficult to know, because the only way to find out is to ask them in a poll.”

The French do have a history of staying home during large-scale vaccination operations. Back in 2009 then-health minister, now culture minister, Roselyne Bachelot, majestically over-ordered vaccine doses against the H1N1 influenza.

Only 8 percent of the population ended up getting the vaccine, in a scheme that cost the then-government hundreds of millions and a lot of embarrassment.

But the difference back then, Salvadori pointed out, was that the virus quickly turned out to be less dangerous than feared, which is not the case for Covid-19.

“I think that we are in a peculiar situation,” she said. “I don’t know if what people say really reflects what they will do.”

‘In the end, they will get it’

To Tom Forth, the data scientist in the UK, there was no doubt about it: the French just like to complain.

To illustrate this, Forth used two graphs showing general life satisfaction in France and the UK respectively, and how these changed with Covid-19.

In France, the curve saw a significant uptick with the arrival of Covid-19 in the spring of 2020:

In the UK, however, the trend was the opposite: “It’s considered impolite (to the French) to be too content with their own life circumstances,” Forth said.

Whether it be “the vaccine, their government’s performance or their opinion on life in general, the French always take one of the most miserable views in Europe,” he said.

“When you have a poll that asks about their certainty regarding the vaccine, this cautiousness translates into scepticism.

“But, in the end, they are probably going to take it.”