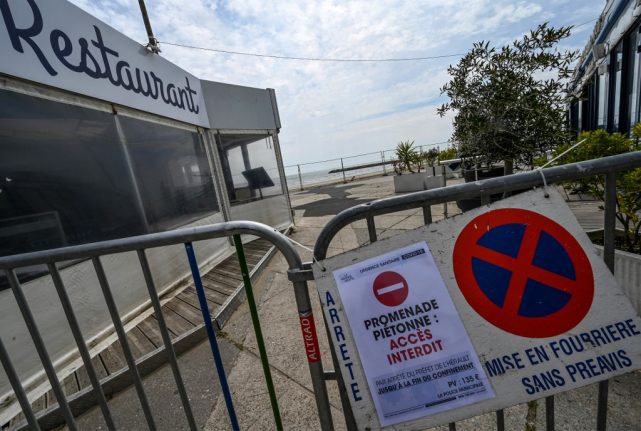 If you break a rule in France, someone is bound to tell you. Photo: AFP

And it's true, these are both very common occurrences.

French people themselves generally accept that they have a well-earned reputation for always complaining, and it's very common – especially if you are a foreigner – to be scolded for getting something wrong, breaching a social code or making a language error.
But I actually love those things. And not because I'm some sort of sunny optimist Pollyanna type, I'm happy to have a good old moan (did I mention that men in Paris piss in the street? It's gross).
Here's why;
Scolding
I'll admit that this one took a bit of getting used to, it's less common outside France and made me feel like a sulky five-year-old the first time that it happened.
But as an incomer in France it's actually quite reassuring – you will obviously get things wrong, there's a lot to learn and a lot of differences, but at least you will know when you do.
READ ALSO The 22 things that are likely to get you a scolding in France
In the UK you can transgress a social code and hear nothing more than an 'excuse me'. You will therefore think it's no big deal, but the person you have cut in front of in the queue will hate you forever and immediately dedicate themselves to destroying your life.
In France, on the other hand you will be scolded and informed of the correct way to do it, so you will know for the next time (or decide to ignore their stupid rule, it's your choice but at least you are clear on what you are doing).

Although I was told off and sent back to the pre-swim showers because I had apparently not soaped myself thoroughly enough for the new hygiene rules, which was mildly humiliating

It's the same with people who correct your French – OK it can make you feel like a stuttering idiot, but they're probably just trying to help and at least you will know that you've made a mistake and won't spend the next 10 years telling people that you went organic because you don't like condoms in your food.
READ ALSO The 18 most annoying French 'false friends' of all
Complaining
I think there are two ways to look at this – one is that it's a cultural quirk that isn't actually as negative as it appears to non-French people.
Maybe I'm more comfortable with this because I'm from Yorkshire, where grumbling is also considered a valid hobby, but French people use complaining as a sort of small-talk.
If you're in the office kitchen with a colleague that you don't know well in the UK you will inevitably end up talking about the weather. In France some sort of complaining will develop. It doesn't matter what it's about – why the coffee machine is broken again, how long the latest Metro strike will last – it's a topic that you can bond over without straying into personal territory that could be uncomfortable with someone you don't know.
Surveys regularly show the French as being the most dissatisfied with a range of topics and French presidents often get terrible approval ratings, but French people are likely to live long, healthy and happy lives – maybe it's because they enjoy all the complaining.
The other side to complaining is to do with expectations. The French have high expectations of their society and their government and why not?
READ ALSO Don't ask 'why are the French always striking' but look at what strikes achieve When complaining moves up a gear. Photo: AFP
France is a wealthy country with lots of advantages so it's reasonable to expect that its people will have a decent standard of living. French people expect this to happen and complain when it does not. Government moves that are seen as lowering the standard of living (such as the recent pension reforms) are greeted with complaints or the more formalised process of complaining – a strike.
While long-lasting strikes can certainly be annoying they a) give you something to complain about to your casual acquaintances and b) contribute to the generous social protections around employment, healthcare and pensions that many of us enjoy in France.
READ ALSO Long lunches, daily bread and complaining – the habits you pick up in France
So that's why these two French habits are in fact virtues. But the pissing in the street? There's just no excuse for that and it needs to stop.