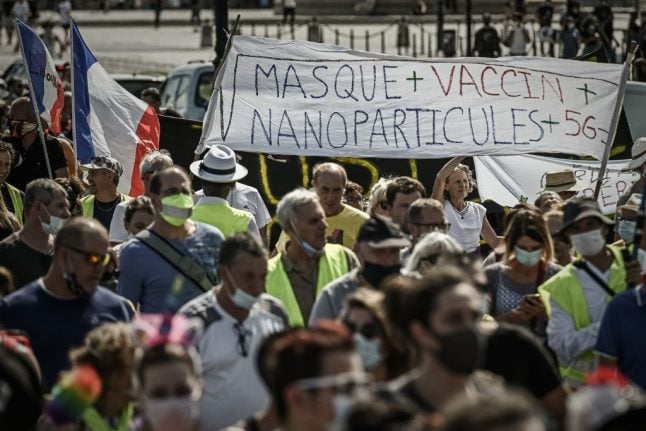 Faced with an unprecedented health crisis, the French government is anxious that many will refuse the only available remedy.

“The (Covid-19) vaccine is our main source of hope for getting out of this epidemic,” French Prime Minister Jean Castex said on Thursday, in a press conference that aimed to boost confidence in the government’s vaccine campaign after it came off to a sluggish start.

To achieve herd immunity – the threshold at which the entire population is protected from the virus – around two thirds of the population must get the vaccine, according to scientists.

In a recent Ipsos poll for the World Economic Forum, published on January 4th, 60 percent of the French respondents said they might not get the Covid-19 vaccine, a much higher number than in the UK (24 percent), Germany (35 percent) and the United States (31 percent).

This reluctance is not new in France, a country that has been a world-leading vaccine sceptic for years.

In the largest study of global vaccine confidence to date, published by Lancet in September 2020 and mapping public sentiment from 2015 to 2019, France came out at the bottom of the list, alongside countries like Indonesia, and Mongolia.

READ ALSO: Why vaccine-sceptic France is so wary about mass immunisation for Covid-19

Yet, despite this some 50 percent of the country’s elderly and vulnerable people voluntarily get vaccinated for influenza each season. The figure is higher than the EU average of 44 percent.

Last autumn, pharmacies ran out of stock of the influenza vaccine shortly after the campaign started, faced by a record-high number of people eager to get vaccinated.

Caught off guard, the government – which already had purchased 30 percent more influenza vaccine doses than usual – had to order more and ask those not in a high risk group to wait and let the most vulnerable get first in line.

While the two are different – not least in that the influenza vaccine is decades old while the Covid-19 vaccine is brand new – could be that those telling pollsters they won’t get the Covid-19 jab might, in the end, change their minds? 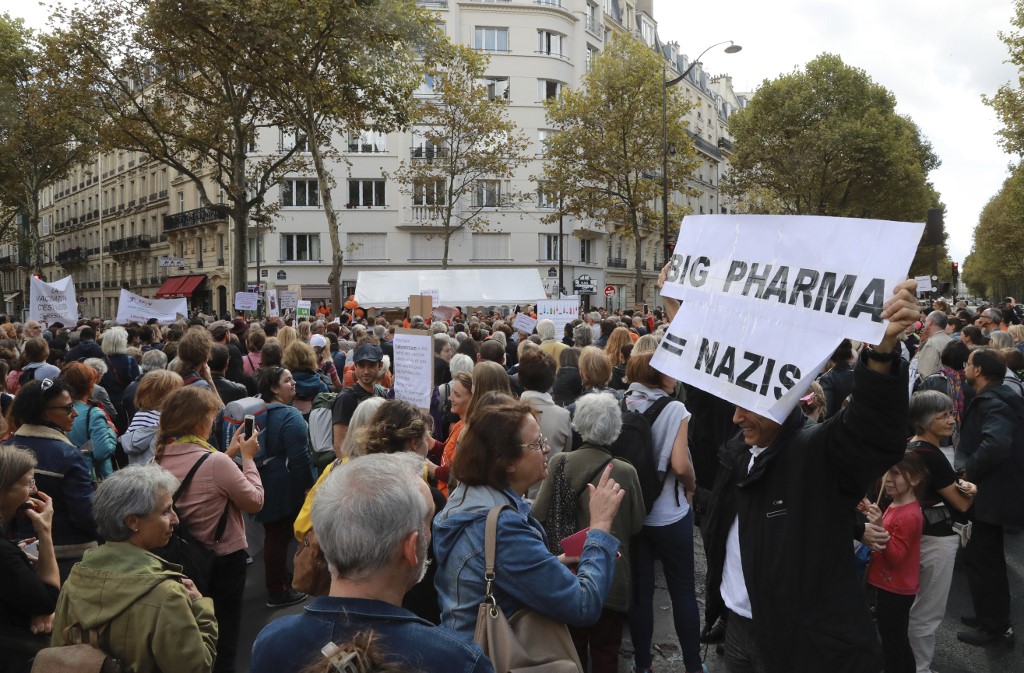 Protesters in front of the health ministry in Paris hold placards decrying a plan to extend the list of mandatory vaccines in France from three to 11, in September 2017. Photo: AFP

‘They can be persuaded’

Antoine Bristielle, a public opinion researcher with the centre-left Jean-Jaurès Foundation, warned against giving too much weight to the anti-vaxx movement in France.

“There has been a tendency to think that those expressing a reluctance towards the (Covid-19) vaccine are anti-vaxxers and conspiracy theorists who would never accept getting vaccinated,” Bristielle told The Local.

Of the 40-50 percent Covid-19 vaccine sceptics, less than 20 percent (some say 5-10 percent) have decided they will definitely not get the jab.

“The rest are people who doubt. They can be persuaded,” Bristielle said, who recently authored a note called Six ways to achieve a successful vaccination campaign.

To be convinced, those on the fence “need to see that the benefits of the vaccine outweigh the risk,” Bristielle said, urging the government to speed up the vaccine programme.

France’s Covid-19 vaccine programme got off to a slow start, partly because officials wanted to avoid scaring off the sceptics by appearing too rushed.

Somewhat paradoxically, the criticism that followed seems to have prompted confidence levels in the vaccine to rise.

Between December 9th and January 7th, the proportion of people saying they intended to get the jab increased by 11 percent – from 45 percent to 56 percent in total – according to two polls published by the news channel LCI.

While this was still low compared to other countries – the UK rate has been nearing 80 percent and the US a rate of 64 percent – it did represent a rise.

…which makes this poll particularly interesting: the share of the French saying that they will get vaccinated went up from 45% on Dec 9 to 54% on Jan 7. Deliberate strategy or inadvertently fortuitous result of poor planning, this is good news pic.twitter.com/kowBR388TU

“It’s the snowball effect,” Bristielle said. “When people see others get vaccinated and that it goes well, it encourages them to do the same.”

The country of Pasteur

France is the country of Louis Pasteur, the pioneering scientist internationally renowned for his groundbreaking vaccine discoveries. For a long time, Pasteur’s heritage left its mark on France by making it an overwhelmingly pro-vaccine country.

“It seems incredible today, but vaccine consensus actually used to be a source of French glory and pride,” Jocelyn Raude, an associate professor in social psychology, told The Local.

In the early 2000s, as many as 90 percent of the French population favoured vaccines.

The shift came in 2009, when the government’s overspending on the less-deadly-than-feared H1N1 influenza virus combined with a pharmaceutical drug scandal caused the trust in both health authorities and the pharmaceutical industry to plunge.

“As a result, in times of health crises such as Covid, people in other countries seek the advice from experts. In France, they try and figure out the answers for themselves,” Raude said. 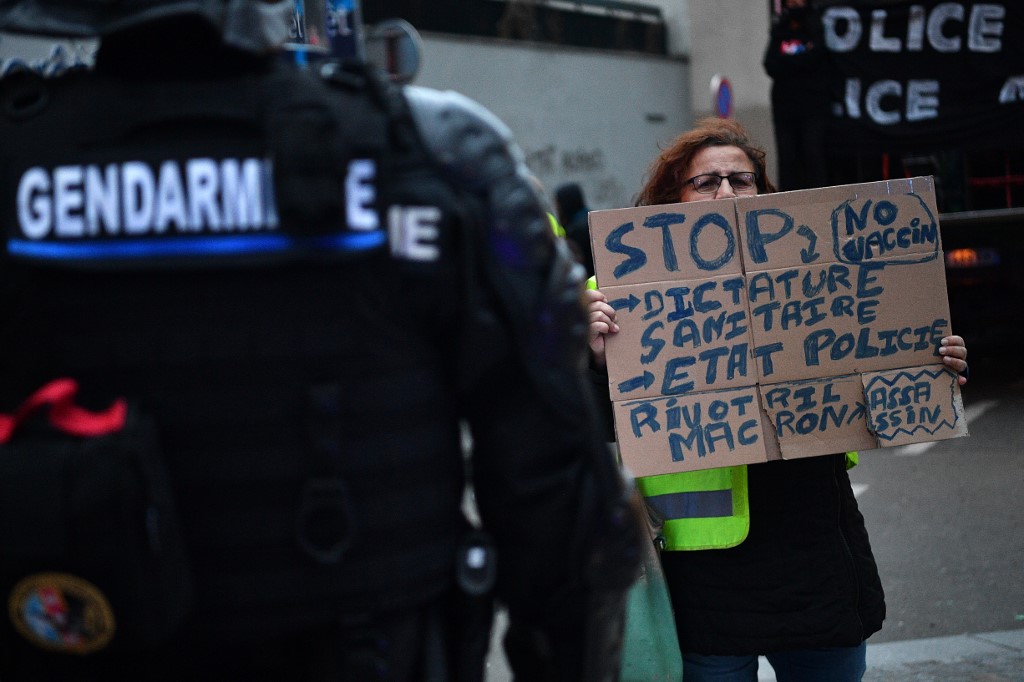 A ‘yellow vest’ protester holds a sign reading “No vaccine. Stop the sanitary dictatorship and the police state” during a “social right’s” protest in Paris in December 2020. Photo: AFP

Despite the broad reluctance, French authorities decided against making the Covid-19 vaccine obligatory.

In recent years France has increased the number of childhood vaccines that are compulsory to be enrolled in school – there are now 11.

EXPLAINED: Why is France debating making the Covid-19 vaccine compulsory?

Françoise Salvadori, a biologist and co-author of Antivax, a history of the anti-vaccination movement in France, said making the Covid-19 obligatory would have been “very risky”.

“The government is well aware that its population is one of the world’s foremost vaccine sceptics. It could have been counterproductive to make the Covid-19 vaccine compulsory,” she told The Local.

‘They don’t tell the truth’

French vaccine sceptics are typically young, aged between 25-35, female and either far-left or far-right, according to a “portrait-robot” by the Jean-Jaurès Foundation.

They lack confidence in elected politicians – only 20 percent say they trust their MPs.

“They don’t tell the truth,” Lucie, a 21-year-old beautician working in the Parisian southeastern suburb Ivry-sur-Seine, told The Local.

“They don’t want to scare us, so they say what they want,” she said, referring to all politicians.

When pressed, she said she might get the vaccine “in a year, when we know more about all the side effects”.

Lucie believed there to be dangerous long term side effects of the Covid-19 vaccine, which authorities hid from the public.

“I have several clients who are nurses who have told me about awful stuff. They don’t even want to get the vaccine,” she said.

These kinds of conspiracy theories are not uncommon in France, but they are difficult to counter, especially because they find supporters in the health sector. In a recent survey, only half (47 percent) of the GPs questioned said they “certainly” would get the Covid-19 vaccine.

READ ALSO: Why are the French so anti-vaccines and so fond of conspiracy theories?

Salvadori said the number of vaccine sceptics was higher among nurses, and even higher among care workers in the country’s nursing homes for elderly, EHPADs.

Raude pointed out that President Emmanuel Macron’s government was in an especially tight spot, due to their low levels of trust from the population, and warned against “politicising the vaccine”.

“The best thing the government can do is to keep away and intervene as little as possible,” Raude said, adding that this was the strategy many other countries had adopted.

Whether or not the doubters, especially young people, in the end would get the Covid-19 vaccine was “the big question”, Salvadori said.

“It will largely depend on the organisation, whether or not they manage to speed up the process.