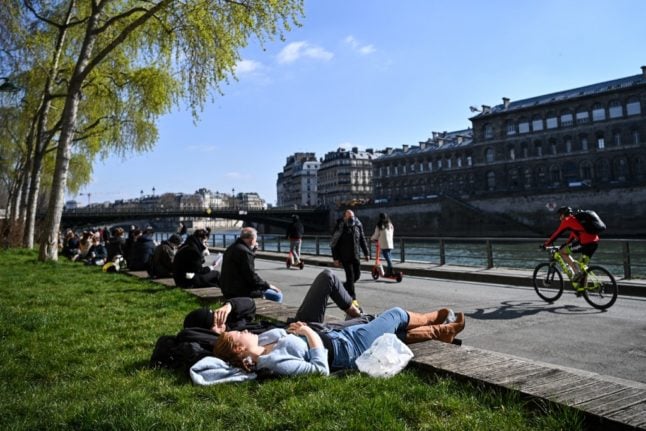 A not-so-lockdown? Parisians enjoy the sun at the Seine riverbanks as the lockdown light entered into effect on Saturday. Photo: Anne-Christine POUJOULAT / AFP

The campaign spells out how to behave both at home and outside in public in the areas concerned by the lockdown light.

Sixteen départements entered a lockdown light on March 20th, following weeks of spiralling Covid-19 rates in their areas that had led to hospitals struggling to cope.

The government came under fire this weekend for its confusing messages on the new measures, which is why they launched this new campaign: Dedans avec les miens, dehors en citoyen (Inside with my own, outside as a responsible citizen).

What are the new rules?

Some of the rule are guidelines, not rules, and some are valid across France.

Here’s a look at what they say.

“I don’t have guests at home.” Guideline – The government attempted to impose a limit on private gatherings over the summer, but this was ruled unconstitutional. This is why they introduced the ‘rule of six’ – also a guideline – to urge people to avoid large gatherings at home. However in the 16 départements under lockdown light, the new guideline is to avoid having anyone over at all.

“I don’t go visiting others.” Guideline – People living in areas on lockdown light are asked not to visit others either.

“I work from home except when it’s impossible.” Rule – Everyone who can should work from home, although there is the possibility of coming into office one day per week for those who feel their mental health is being affected by 100 percent home-working.

“I regularly ventilate my house.” Guideline – Good ventilation is key to avoid spreading the virus, which the government is keen to remind people, but you won’t get fined for not opening your windows.

“I don’t leave my home after 7pm, except for work or an emergency with a permission form.” Rule – France has been under a nationwide nighttime curfew since January 16th and the rules remain in place until further notice. Last week the government pushed back the curfew from 6pm to 7pm, which means everyone is banned from leaving their house between 7pm and 6am, bar a few exemptions. For an in-depth explanation on what the curfew rules are, click HERE.

READ ALSO: Reader question: In lockdown areas of France, when can I walk my dog and how far can I go?

“I wear a mask and respect social distancing.” Rule – France made face-masks compulsory inside all public spaces across the country last year and most local authorities in the areas on lockdown have issued rules requiring them outside as well.

“I avoid eating or drinking if I’m not alone or with people from my own household.” Guideline – The coronavirus spreads especially during mealtimes, the French government has stressed repeatedly, which is why they want to urge people to avoid sharing meals unless they are with those living in the same household. Picnics with friends are therefore against the government guidelines.

“I don’t leave my region or département except with an imperative or professional reason, justified by a permission form.” Rule – Travel is banned for regions on lockdown light (full rules HERE). People living outside the areas on lockdown may still travel for tourism reasons, although not to areas on lockdown. They may only transit through these areas.

READ ALSO Easter travel in France – what are the rules and the government advice?

“I can go outside until 7pm for the following reasons” – Rule. The following activities in areas on lockdown can be done without an attestation permission form outside curfew hours, if they are within 10 km of the home:

“I need an attestation permission slip to justify my trip if I go further than 10 km.” Rule – Longer trips will still require an attestation. You can find the full explanation for this rather complicated situation HERE.

You can find the form HERE or on the TousAntiCovid app.

“I can meet friends outside, but we must keep to a maximum of six and respect the health rules.” Rule – This was a much-needed clarification following confusion on whether the 10 km rule allowing for outdoor activity was only for exercise or also opened up for social gatherings. Police in the areas on lockdown light have been asked to disperse large groups outside, but social gatherings up to six people are allowed. However the guideline is to avoid eating and drinking in such groups, which means picnics are discouraged.

As with all health rules in France, breaking the lockdown rules can land you with a €135 fine, rising to €3,750 and six months in jail for repeat offenders.

On a national level, the incidence rate – the number of new Covid cases per 100,000 inhabitants, taken as a seven day-average – had risen to 307.8 on March 19th, the latest public health data available, up from around 220 in early March.

In the greater Paris region Île-de-France’s, the incidence rate was 549, up from 350 two weeks ago. In Seine-Saint-Denis, the northern Paris suburb, the rate was 683 – the highest rate of the whole country.

“We are having great difficulty taking new patients. At this rate, we going straight into the wall,” Jean-François Timsit, who heads up the intensive care ward at the Bichat hospital north in the capital, told BFM TV on Tuesday. “Everywhere it’s full, full, full.”

Hospital chiefs and epidemiologists are divided as to whether the lockdown light will be enough to halt the spread of the virus.

Epidemiologist Arnaud Fontanet called the measures “strong,” but stressed that their impact would depend on whether people adhered to them.

“If people follow the recommendations, it can work. If they don’t follow them, unfortunately it won’t be enough,” he told BFM TV on Tuesday.