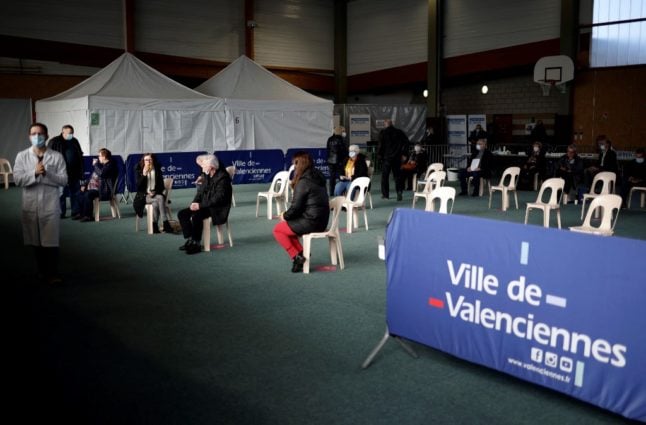 Speaking on a trip to Valenciennes, Macron said that from Saturday, anyone over the age of 70 can be vaccinated. At present the 50-74 age group can only be vaccinated if they have an underlying health conditions such as diabetes, hypertension or a BMI or 30 or above.

Meanwhile a plan was unveiled to use large buildings including sports stadiums as vaccine centres. the Stade de France in the northern Paris suburb of Seine-Saint-Denis is among the sites reportedly being considered.

“We are working with local representatives to put them in place,” Industry Minister Agnes Pannier-Runacher told BFMTV channel.

France had previously baulked at setting up supersites to rapidly dispense vaccines in large numbers after a failed experiment with “vaccinodromes” during the H1N1 swine flu pandemic in 2009.

Until now, the jabs have been dispensed in community halls, local leisure centres, hospitals, doctor’s surgeries and pharmacies.

But with hospitals struggling to cope with a third wave of infections Health Minister Olivier Véran on Monday announced that France would follow the lead of countries like the US and Britain that have turned stadiums into inoculation sites.

“The army’s health service will work on developing a certain number of large vaccination centres,” he said, adding that there would be at least 35 across the country.

Firefighters and emergency workers would also be drafted in the staff the centres, he added.

After an excruciatingly slow start in late December and January, France’s vaccination campaign has sped up.

But with more infectious Covid-19 variants spreading rapidly, the caseload has risen again, prompting the government to place part of the country, including Paris, under partial lockdown last weekend.

So far, France has administered some 8.8 million doses, compared with over 30 million in the UK. In total 11.7 percent of adults in France have had at least one dose of the vaccine and 4.6 percent are fully vaccinated.