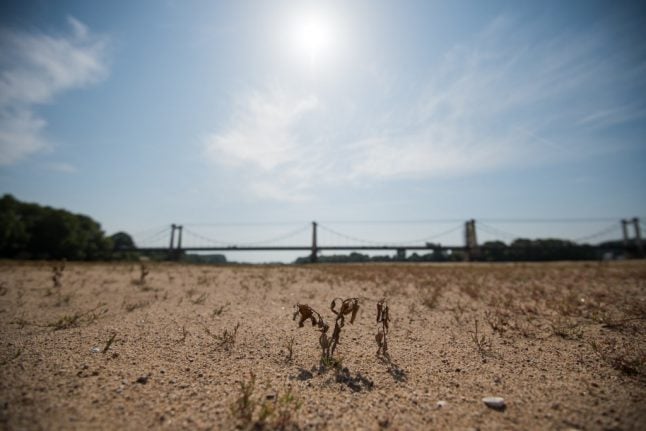 The dried out bed of the River Loire at Montjean-sur-Loire, west France. Photo: AFP

As the country gears up to face what is predicted to be a record-breakingly hot day day, French rail operator SNCF has called on passengers only to travel if absolutely necessary.

The company says that SNCF and suburban RER trains across France will still be running, but could be delayed as some stretches of lines will have extra speed restrictions because of the heat. Pre-bought tickets can be refunded or exchanged until the end of Thursday. Passengers who do decide to travel are advised to bring bottled water.

Meanwhile Paris commuters on the Paris Est lines are warned that services are very disrupted on Thursday morning because of a fire in an electricity substation.

The blaze, believed to be related to the heatwave, broke out in Noisy le Sec in Seine-Saint-Denis on Wednesday night and brought to a halt all services on the east side of the city – TGV Est, TER, Intercités, and RER lines E and P.

Twenty départements in northern France – including the greater Paris area – are currently on red alert, defined as a temperature that can be harmful to health.

The mercury in Paris was set to reach 42C today which will easily beat its current record temperature of 40.4C set back in 1947.

At 6am Météo France recorded temperatures of 26.5C in Paris and 27.1C in Bordeaux.

The French weather forecaster is predicting that Paris, Lille, Rouen, Orléans, Reims, Dijon, Nancy and Strasbourg will all break their all-time temperature records on Thursday.

In Paris only vehicles with CritAir stickers 1 and 2 are allowed, while the others allow stickers 1,2 and 3. In Lille an exception has been made for carpooling vehicles which are allowed into the city regardless of which sticker they have.

France's Health Minister Agnes Buzyn had a stern warning for members of the public who could suffer health problems as a result of the extreme heat: “Everyone is at risk with these kinds of temperatures.” She warned that it was ill-advised to take part in any sporting activity over the coming days.

It's only the second time Météo France has issued red level warnings for a heatwave in France. The first time was during June's heatwave when several départements in the south were place on red alert as France recorded its highest ever temperature of 46C.

The red level alert, which is for a “dangerous weather phenomenon” comes with some warnings for the public to take the upmost precaution.
Météo France said “all of us are threatened, even healthy people”.
It adds: “The danger is greater for seniors, people with chronic illness or mental health issues, people who take regular medications and people who are isolated.”
Those who work outside are told to take care and watch out for the signs of heat stroke, which include: fever over 40C, hot, red and dry skin, headaches, nausea, drowsiness, intense thirst, confusion and convulsions.
Paris in particular remains haunted by the early summer of 2003 when 15,000 deaths were blamed on the heat and the authorities were bitterly criticised for not mobilising fast enough.
Local authorities have placed restrictions on water usage in many areas due to drought-like conditions that have seen ground and river water levels fall dramatically.
“At the moment, it's tricky but under control, but we need to be very vigilant,” junior environment minister Emmanuelle Wargon said of national water levels on Tuesday, calling on people to show “civic responsibility” to avoid wastage.
Water restrictions are in place in 73 out of the 96 mainland departments, with the worst affected areas in the Loire region of central France, as well as the south west and the south east.
The Ministry of Health has set up a hotline number for people suffering from the heat. It's 0800 06 66 66 66, free from a landline and operating from 9am to 7pm.