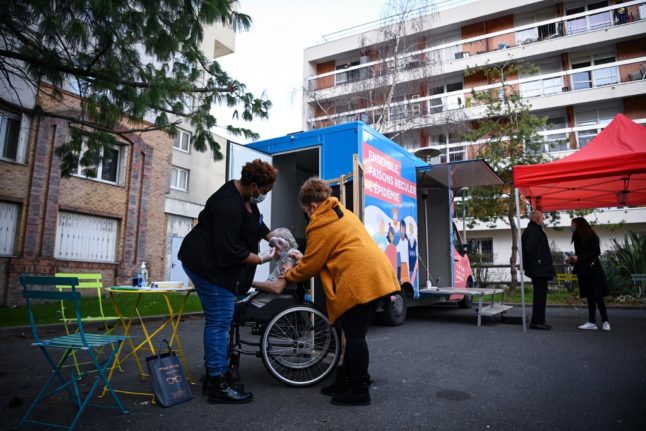 An official in the health ministry told reporters on Tuesday that out of 600,000 doses delivered to health centres since early February, only a quarter of them had been administered.

“There is an issue with uptake… because we can see that around 75 percent of stocks have not been injected,” the official told journalists at a briefing, asking not to be named.

So what’s the problem?

Is this just an issue with AstraZeneca?

No, overall France has received far more doses of all three vaccines licenced for use – AstraZeneca, PfizerBioNTech and Moderna – than it has managed to administer.

According to health ministry data, by March 1st the country had received 7.9 million vaccine doses and administered 4.6 – of which 3 million were first doses and 1.6 million second doses.

The below graph shows vaccines administered in blue and doses of vaccine received in France in grey, showing that under-use of doses has been an issue since the start of the vaccine programme.

The vast majority of vaccinations done in France so far have used the Pfizer BioNTech vaccine.

Why are all these vaccines just sitting here?

The main reasons are a combination of policy and logistical problems.

France has committed to giving the second dose of the vaccine within 3-4 weeks of the first, meaning some doses are held back to ensure that everyone who has had their first – however this policy alone cannot account for the number of unused doses.

There have also been logistical problems as France has struggled to launch a speedy and efficient vaccine programme, with officials describing an overly-complicated system of delivery that has resulted in many centres running short of doses.

Many people have also reported difficulty in booking appointments at vaccine centres around the country.

The average number of vaccines given per day now stands at around 120,000, but this number plummets at weekends.

So what are the issues specific to AstraZeneca?

The dominance so far of Pfizer can be at least partially explained by timing and licensing – Pfizer’s vaccine has been in use in France since the end of December, while the first AstraZeneca doses did not arrive until February 8th.

Likewise with licensing – AstraZeneca was initially only licenced in France for under 65s, meaning the first priority groups of over 75s and Ehpad nursing home residents and staff were all vaccinated using either Pfizer or Moderna.

AstraZeneca was used first for healthworkers, then from February 25th for 50-64-year-olds with underlying health issues. That group was expanded on March 2nd to include 65-74-year-olds with health issues, but it is unlikely that this will be showing up in the data at present.

It’s also true that AstraZeneca vaccines for GPs are sent in batches via pharmacies, so some of the unused doses may simply be in transit to GP surgeries.

Is it true that French people are rejecting the AstraZeneca vaccine?

This is a tricky one to answer as most evidence of AstraZeneca refusal is anecdotal.

As we reported last week, several French hospitals have paused or slowed their AstraZeneca vaccine programme for staff – not because of poor take-up but because the seemingly high numbers of staff suffering temporary side effects was causing logistical problems with too many staff needing time off to recover.

It’s also true that France as a whole has high levels of vaccine scepticism, with polls showing that only around half of people saying they will definitely be vaccinated, however this seems to be an issue with vaccines in general rather than AstraZeneca’s jab specifically.

French President Emmanuel Macron has been roundly criticised for saying that AstraZeneca seemed to be ‘quasi-ineffective in over 65s’ – a view not backed up by France’s medical regulator which said only it was concerned at the initial lack of trial data.

Health Minister Olivier Véran, himself a doctor, tried to dispel the doubts by getting the vaccine live on TV.

What is the government doing about this?

The French government is coming in for an increasing level of criticism about the slow pace of its rollout, which has so far seen 4.53 percent of the population receiving a first injection, of which 2.45 percent have received both doses and are therefore fully vaccinated.

Several steps have been taken to address this in recent days.

On Tuesday medical regulator Haut Autorité de Santé (HAS) recommended the AstraZeneca vaccine for all under 75s, allowing the government to open up another tranche of vaccinations in the 65-74-year-old age group, who can now receive an appointment via their GP if they have an underlying health condition.

The HAS also recommended that pharmacies begin to administer all three types of the vaccine – a potential game-changer in the rollout as France has a vast network of pharmacies which have already run a successful seasonal flu vaccination campaign. This will begin “within days” says the health minister.