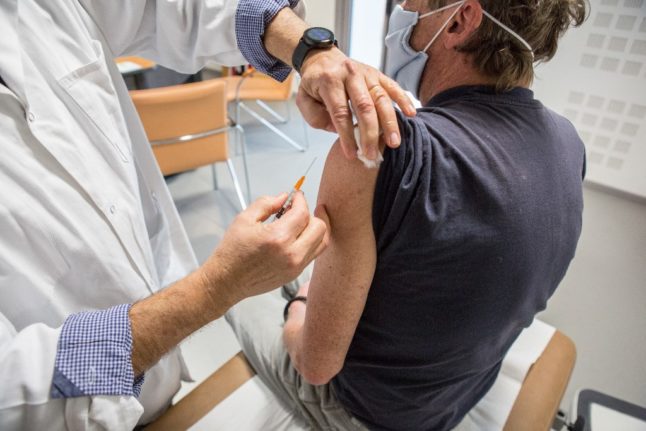 Health Minister Olivier Véran announced on Monday night that people aged between 65 and 74 with an underlying health condition can now access the AstraZeneca vaccine through their médecin traitant – registered GP.

This scheme was already open to 50-64-year-olds with serious underlying health issues and healthcare workers, but will now be expanded as restrictions on the use of the AstraZeneca vaccine are lifted.

“From now on, everyone aged over 50, and who suffers from underlying health conditions – diabetes, hypertension, cancer – can get vaccinated with AstraZeneca . . . including those aged between 65 and 75 years old,” the health minister told France 2 on Monday evening.

The Haute autorité de santé (HAS) – France’s highest advisory health authority – on Tuesday revised its opinion on the AstraZeneca vaccine, saying its previous recommendation to only offer it to those aged between 18 and 65 was due to a lack of data and that the injection “can now be extended to people over 65.”

The Covid vaccines were so far available to over 75s at vaccine centres, while 50-64-year-olds with underlying health conditions could access the AstraZeneca injection through their registered GP. This policy lead to critics accusing the government of forgetting 65-74-year-olds in the vaccine rollout.

This is another bold promise by Véran. Evidence from the current AZ roll-out suggests it will be very difficult for France to crank up to such numbers so quickly.
Meanwhile…Le Monde reports that Paris area will almost certainly go into weekend lockdown from Friday night. 3/3

Véran, who last week said 65-74-year-olds would gain access “by April”, now said they could either contact their registered GP to get the vaccine or the hospital if they are under treatment there.

“In a few days” the AstraZeneca injection would also be available to them in pharmacies, Véran said.

READ ALSO: How to book an appointment for the Covid-19 vaccine in France

France has so far three vaccines: AstraZeneca, Pzifer BioNTech and Moderna, but only Pzifer and Moderna have been authorised for all age groups. Medical regulators in France, along with countries including Germany, Sweden and Poland, initially considered that there was not enough data on its effectiveness to authorise it for over 65s.

Since that decision in early February, several new studies have been published.

“The Haute autorité de santé now considers that all the vaccines available to us in France have an effectiveness described as ‘remarkable’, to protect people from severe forms of Covid,” Véran said.

Last week a study found that the AstraZeneca vaccine efficiently protects people over 65 against the virus, following weeks of doubts that led to countries struggling to convince people to get the injections.

UK scientists said last week they had found that the vaccine was effective even for over 80-year-olds.

This contradicted previous beliefs that saw President Emmanuel Macron describe the AstraZeneca vaccine as “quasi-ineffective for people over 65”.

Over 75s will however still receive the Pfizer or Moderna injections in vaccination centres, Véran said, adding that those who had already had the virus would only need one injection of these vaccines.

Véran said the new rules would give 2.5 million people access to the Covid vaccine, “roughly a third of people” in the 65-74 age group.

Underlying health issues includes diabetes, hypertension or a BMI of 30 or above. You can find the full list of eligible conditions HERE.

Due to the age restriction France has accumulated AstraZeneca stocks, and has only used 24 percent of the 1.1 million doses received, according to the health ministry. The loosening of the rules will allow for the pace to speed up the vaccination scheme.

“In March alone we will aim to offer a first vaccination to 6 million people,” the health minister said.

France had on February 27th injected 2,967,937 people in total (4.4 percent of its population), of which 1,582,433 have received their second dose and are therefore fully vaccinated (2.36 of the population), according to the latest data provided by the Health Ministry and published on the website VaccineTracker.

Sixty percent of the population needs to be vaccinated order to achieve herd immunity.