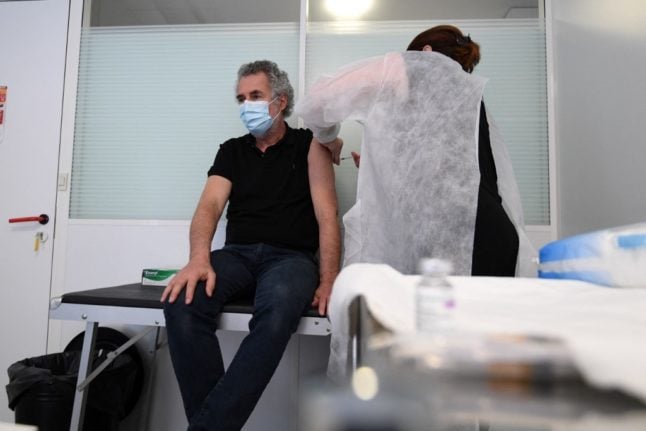 Studies show these secondary effects have nothing to do with the AstraZeneca vaccine’s effectiveness, and are not harmful. Photo: AFP

Since French health workers started receiving the AstraZeneca vaccine on February 6th, many have reported experiencing side effects including a high fever (40C), fatigue and general flu-like symptoms.

The French health ministry has moved to reassure staff that these effects are temporary and do not mean that the vaccine does not work.

But now some hospitals in France have decided to slow down their vaccination campaigns in order to avoid having too many staff off sick at the same time, while others are pausing them altogether.

Thomas Bourhis, a nurse at CHRU hospital in Brest, Brittany, told BFMTV. “The CHRU Brest hospital undertook an unusual strategy, because it created a vaccination team that went to the departments that were most exposed to Covid-19, which means entire teams were vaccinated all at once.

“But it turns out the side effects were underestimated, and we found ourselves with almost a third of health workers in some departments presenting severe symptoms and having to go on sick leave.

“The roll out of this vaccine has therefore been suspended temporarily at the hospital.”

Studies show these secondary effects have nothing to do with the vaccine’s effectiveness, and are not harmful.

“The secondary effects of the Covid-19 vaccines are carefully monitored by ANSM [The French National Drug Safety Agency]. For the AstraZeneca vaccine, it’s important to remember that any side effects remain benign and temporary,” the health ministry said in a tweet.

In a report published on Thursday, the ANSM listed “149 declarations between February 6th and 10th mentioning flu symptoms, often of high intensity”. The average age of the health professionals concerned was 34.

The Poitiers University Hospital (CHU de Poitiers) has began to do this by avoiding vaccinating entire teams all at once, and at least three hospitals in the west of France have suspended AstraZeneca vaccinations of their staff, according to a report by France Bleu.

A hospital in Saint-Lô in Normandy has also slowed down its vaccinations, while the CHRU de Brest hospital (Finistère) has decided to suspend its vaccination campaign completely, according to Ouest France.

The AstraZeneca vaccine in France is only licenced for under 65s, so until now it has been used almost exclusively on health professionals, while older people visiting vaccine centres get the Pfizer BioNTech or Moderna jabs.

Starting on Thursday, people between the ages of 50 and 64 with underlying health conditions can also begin to receive the AstraZeneca vaccine through their GPs or in the workplace.

The AstraZeneca jab is also expected to be used more widely once France rolls out injections more widely in the community, particularly in pharmacies, since it does not require the super-cold storage of the Pfizer BioNTech vaccine.