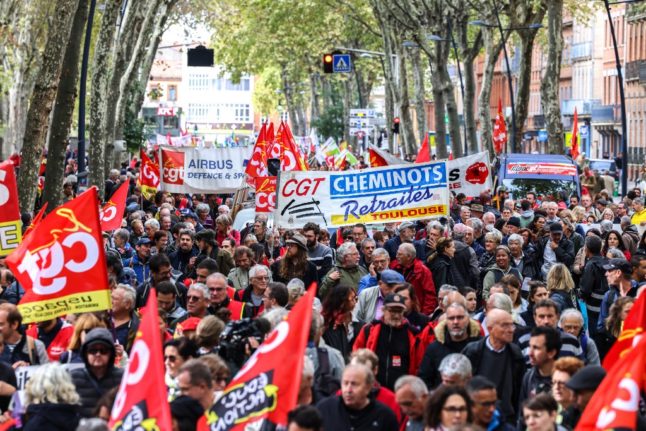 The French government has announced its long-awaited pension reform, and within hours unions had called strikes.

The pension reform includes raising the pension age from 62 to 64, but also scraps the ‘special regimes’ that allowed some workers – mostly in the public sector – to retire early. For this reason public sector workers are likely to be especially militant in the upcoming dispute.

New dates for strikes, protests and other actions are still being announced, we will update this article with new information as it comes with the newest dates at the top.

February 14th – not actually related to the pension plans – this is a separate dispute over pay and investment – but GPs will walk out on Tuesday, February 14th, leading to many surgeries closing completely.

February 11th – this will be the fourth day of widespread strike action. France’s largest trade unions made a joint announcement calling for workers to walk out on both February 7th and 11th. Falling on a Saturday, this is the first weekend action. It will also coincide with the second weekend of school holidays for French students in Zone A, and the first weekend for students in Zone B.

February 7th – the third one-day mass strike. Expect major disruption on the railways, on city public transport and school closures, among other actions, as well as protest marches and demos in towns and cities across France.

February 6th, 7th and 8th – the CGT oil refinery workers will also strike for 72 hours from February 6th, and have not ruled out extending their action beyond these three days.

Two unions representing rail workers (the CGT Cheminots and Sud-Rail) had already called on members to strike on February 7th and 8th.

The unions are also threatening to launch rolling strikes from mid-February if the pension reform is not scrapped, how this action is yet to be confirmed.

After January 31st… Two of the largest unions representing French ski lift operators and seasonal workers, FO (Force ouvrière) and the CGT, have filed “unlimited” strike notices starting on January 31st – the same day that unions across other sectors have called for another ‘mass strike’.

More localised actions could be added and the unions say they intend to take “strong action” during the Ski World Cup, held in Courchevel from March 16th-20th. Watch this space.

Tuesday, January 31st – a second ‘mass strike’ day, backed by all eight of France’s union federations. An estimated 1.27 million people marched in the streets of France, according to the French ministry of interior ministry. This represents a larger number than the last protests on January 19. Unions representing workers at ski resorts have filed an unlimited strike notice beginning this day, which started with walkouts on the 31st.

Monday January 30th – Organisations representing high school pupils in France are calling for protests on January 30th, the day before the second day of “mass strikes”. They are called for high schools to be blockaded the following day on January 31st.

January 26th and 27th – oil refinery workers belonging to the CGT union will be taking part in the January 19th strike, but have also announced extra dates, including a 48-hour strike starting on January 26th. As well as walking out from work they have also threatened blockades – a similar action in October caused filling stations across the country to run dry.

January 26th – The CGT branch for workers at France’s ports and docks  called for a 24 hour strike on January 26th, calling on “docker workers and port workers to amplify their action” against pension reform.

January 21st – a demonstration is planned for Paris against the pension reform.

January 20th onwards – while most unions have filed one-day strike notices, some have filed ‘unlimited’ notices, which means that their actions will continue after the one-day strike is over – drivers including truck drivers have called for unlimited action, as have workers at France Télévisions.

January 19th – all eight of France’s trades union federations have called a strike on Thursday, January 19th, which lead to significant disruption across the country, particularly on all forms of transports. More than 1 million people took part in demos in towns and cities across France.