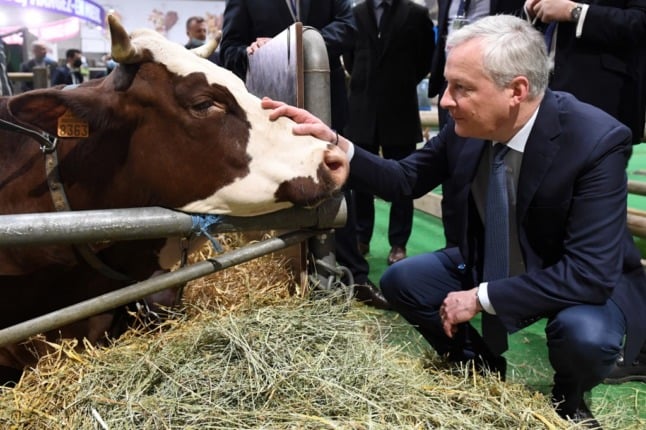 It's not just people who are exposed to French politicians' charm offensives. Photo by BERTRAND GUAY / AFP

Monday marks the official start of the campaign, with all candidates required to formally declare by 6pm on Friday, March 4th. Most of them did this weeks ago, but Emmanuel Macron left it until just 24 hours before the deadline to confirm what was already widely assumed – he is running for a second term in the Elysée Palace.

On Monday at 12 noon, the Constitutional Council released the names of all candidates who have gained more than 500 signatures of support – known as parrainages – and who will therefore appear on the ballot paper. Again, we already know that most of the high-profile candidates have achieved this, but the Trotskyist candidate Philippe Poutou may or may not have got the final few signatures he needed before the Friday deadline.

Macron spent most of the weekend engaged in international diplomacy over Ukraine, including another lengthy call with Russian premier Vladimir Putin – 1 hr 45 minutes – his fourth such call since Russia invaded Ukraine. According to the Elysée’s readout of the call Macron expressed serious concerns about nuclear safety.

We don’t want to worry anyone, but this is the photo that his official photographer posted on Instagram on Sunday

We also know via the Elysée that Macron and Putin chat in French and Russian, respectively, with translators, and that Macron tutoyers Putin – ie uses the informal tu, rather than the formal vous.

Macron’s interior minister Gérald Darmanin was engaged in international diplomacy of a rather different kind, sending a letter to his British counterpart Priti Patel accusing the UK government of a ‘lack of humanity’ towards Ukraine refugees, after many who were trying to join family in the UK were turned back at Calais by British officials.

Patel has angrily snapped back. The pair have form for this type of clash – they have already butted heads on the issue of migrant crossings in the Channel. They’re actually quite similar in some ways – both from immigrant backgrounds (Darmanin’s grandfather was from Algeria), both to the right of their respective political parties and both seemingly ambitious and keen to be seen to ‘getting tough’ on issues including crime and immigration – but maybe it’s a case of being too close for comfort.

This weekend also saw the final days of the Paris Salon de l’Agriculture, a very fun farm show that’s also a must-visit for any serious French politician, where they show that they are women or men of the people, unafraid of getting their hands dirty by petting cows.

It was Jacques Chirac who really popularised this, but social media has been invented since he was president, and now no major French politician’s social media feeds are complete without pictures of them at the farm show.

After careful consideration, we reckon that Finance Minister Bruno Le Maire has the best cow-petting picture, a relaxed shot of him apparently having an in-depth chat with a fairly indifferent looking bovine.

Things seem a bit less relaxed in the Le Pen camp, where Marine Le Pen’s niece and former protegée Marion Maréchal has announced that she is defecting to her far-right rival Eric Zemmour.

Marion had previously said that she would not support her aunt, and over the weekend confirmed that she will instead back  Zemmour. Interviewed on TV at the time of her niece’s earlier announcement, Le Pen appeared close to tears as she talked of the “cruelty” of the move from the niece she helped raise.

Monday sees Macron do his first official campaign event. A planned rally in Marseille was cancelled due to the Ukraine crisis, so instead his first trip onto the campaign trail is a low-key one – visiting Poissy in the greater Paris area where the mayor Karl Olive is a close Macron supporter, for what his team say will be mostly ‘free conversation with the locals’.

Prime Minister Jean Castex will be at Gare du Lyon with education minister Jean-Michel Blanquer and equality minister Elisabeth Moreno for the the arrival of the Women’s Foundation Equality Train.

Marine Le Pen is giving a press conference on education at her campaign HQ and Valérie Pécresse is visiting a supermarket in Val d’Oise.