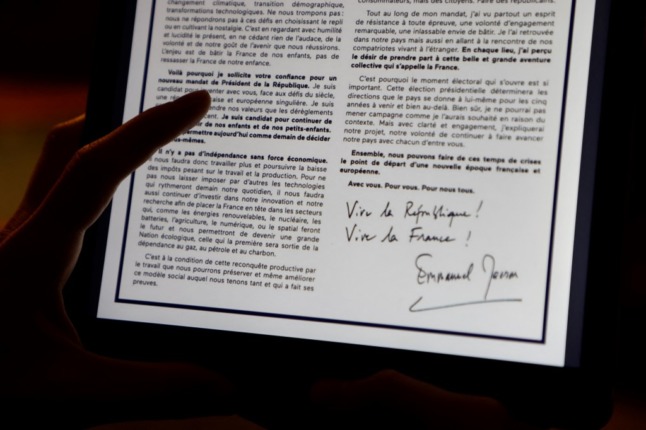 French President Emmanuel Macron declared his intention to run for reelection in a letter addressed to the French people. Here are the key points. (Photo by Ludovic MARIN / AFP)

It was never really in doubt that he would be a candidate, but Macron officially declared his intention to run on Thursday evening, just 24 hours before the deadline for declarations. He produced a long letter which was released online on Thursday and then printed in regional French newspapers on Friday.

While the letter wasn’t exactly a manifesto, it did lay out some of Macron’s priorities.

Here is what we learned:

“We need to work more and pursue a cut in taxes weighing down work and production”, he wrote.

Macron’s first term has seen taxes fall for practically everyone in France, so no major change there.

FACT CHECK: How well is the French economy really doing?

Outside of this, he spoke of the need for major investment to make France a world leader in sectors such as renewable energy, nuclear production and batteries, in order “to become a great ecological nation, which will be the first one to lose its dependence on gas, oil and coal.”

Macron’s supporters believe the current president has done more than any other to address the climate emergency – but critics say this is just a communication strategy. Since Macron took office, the French courts have twice found the government responsible for not doing enough to tackle climate change.

He is hosting EU leaders at Versailles next meeting for a summit on European defence and energy policy, in response to the Ukraine invasion.

FACT CHECK: How committed is France to tackling environmental issues?

The letter also stressed the need to fight inequality, by “attacking it at the roots”.

“We will make sure that all the children of France have the same chances and that republican meritocracy becomes once again a promise for all. For that, the priority will be given to schools and to teachers, who will be more free, more respected and better paid,” he said.

It remains to be seen whether this pledge will win over French teachers, who have been striking over Covid policy in schools over the past couple of months.

READ MORE Why are France’s teachers going on strike over Covid rules?

The president also said he would invest more to help elderly people live at home for longer in order to ease pressure on retirement homes; pursue greater inclusivity for disabled people; develop better preventative healthcare and address the issue of “medical deserts” – areas of the country where there are too few doctors or medical services to meet the needs of the population.

Opposition to the far-right

Macron implicitly attacked his far-right rivals by saying that in addressing future challenges, France should not “withdraw or cultivate nostalgia.”

The two candidates most likely to challenge Macron in second round are far-right leader Marine Le Pen and centre-right candidate, Valérie Pécresse.

Le Pen led a shamelessly anti-immigrant and Islamophobic political career for decades. Pécresse meanwhile made reference to a far-right conspiracy theory known as the Great Replacement Theory at a campaign rally last month.

Immigration and identity politics was conspicuously absent from Macron’s letter, which took a more cheerful tone about “this beautiful and great collective adventure called France.”

A campaign unlike others

Without naming the Russian invasion of Ukraine, Macron made clear that this campaign would not be like others.

“I will not be able to lead this campaign as I would have liked to because of the context. But with clarity and commitment, I will explain our project and our will to continue pushing our country forward with each and every one of you,” he wrote.

Macron has played a significant role in attempting to mediate the crisis in Ukraine, with numerous telephone calls made to his Ukrainian and Russian counterparts, as well as co-ordinating the response at a European level.

A poll released on Friday showed that 29 percent of people said they would vote for Macron in the first round – a five point jump compared to just two weeks ago. All of his main rivals have seen their popularity slip in the same period.

“No doubt some form of campaign will resume but I believe the result is already a foregone conclusion. President Emmanuel Macron will win,” wrote our columnist, John Lichfield.

“Most of all he has won because three of his most important challengers [Le Pen, Zemmour and Mélenchon] have a long and ignoble record of glorifying or apologising for Vladimir Putin.”