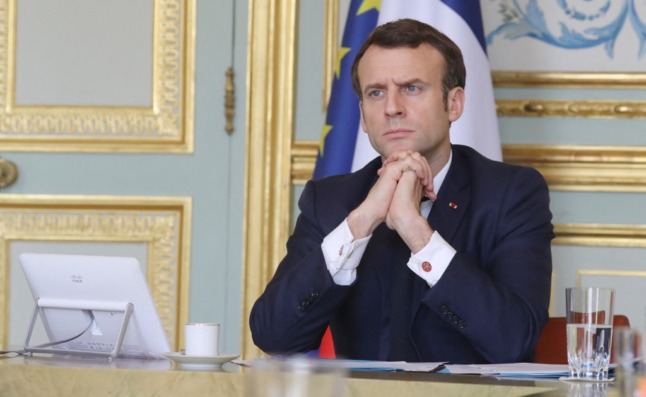 Macron's previous call with Putin left him feeling the worst was still to come. (Photo by Ludovic MARIN / POOL / AFP)

Russia would reach its objectives in Ukraine “either through negotiation or through war”, Putin told Macron according to a French presidential official, adding the Russian president also pledged “it was not his intention” to attack Ukrainian nuclear sites.

Macron found Putin “very determined to achieve his objectives”, including on “what the Russian president calls the ‘de-Nazification’ and the ‘neutralisation’ of Ukraine”, added the official, who asked not to be named.

Putin also demanded recognition of the Ukrainian peninsula of Crimea — annexed by Russia in 2014 — as part of Russian territory as well as recognition as independent of two Ukrainian eastern breakaway regions already recognised by Russia.

These demands are “unacceptable for the Ukrainians”, said the official.

Putin also denied that the Russian army is targeting civilians after Macron urged him not to endanger civilians, in line with international law.

The French president replied to him that “the army attacking is the Russian army” and said he had “no reason to believe that the Ukrainian army is putting civilians in danger”, the official said.

“President Putin has said that it was not his intention to carry out attacks on these power stations,” said the official, adding that the Russian president said he was prepared to meet UN atomic agency standards for nuclear plant protection.

The new telephone talks, which a presidential official said lasted 1 hour 45 minutes and was at Macron’s request, was the fourth time they had spoken since the Russian invasion of Ukraine on February 24th.

It came after a tense call on March 3rd which the Elysee said had left Macron feeling “the worst is to come” in Ukraine with Putin intent on seizing “the whole” of the country.

READ ALSO: Macron tells French ‘I will protect you’ from effects of war in Ukraine

According to the Kremlin, Putin in the telephone call blamed Kyiv for failed civilian evacuations from the key Ukrainian port city of Mariupol which is surrounded by Russian troops.

Putin “drew attention to the fact that Kyiv still does not fulfil agreements reached on this acute humanitarian issue”, according to a statement from the Kremlin, after two agreements to evacuate Mariupol fell though following allegations of ceasefire breaches.

Also on Sunday, a US State Department spokesman said Macron would meet US Secretary of State Antony Blinken on Tuesday, as world leaders scramble to stop Russia’s invasion of Ukraine.

Macron was expected to host Blinken on Tuesday around 6pm. (1700 GMT), the spokesman said.

This came on the 11th day of the Russian invasion of Ukraine and as Russian forces pressed a siege of the key southern port of Mariupol and destroyed an airport in the west of the country.