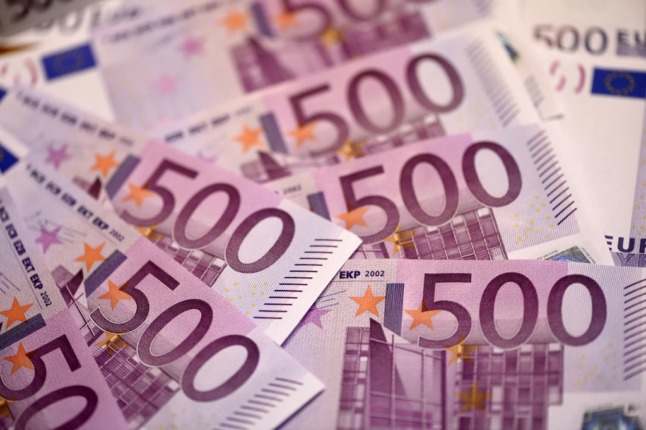 Purchasing power will be a central issue in the upcoming presidential election in France. (Photo by MIGUEL MEDINA / AFP)

An IPSOS poll published in February found that 52 percent of French people listed purchasing power as one of their top three priorities ahead of the upcoming election.

“The question of how much money people have in their pockets is important to all electorates,” said Émeric Bréhier, director of the political observatory at the Jean Jaurès Foundation.

“Generally, the discourse is ‘my salary has only increased a little but my costs are going up a lot'”

But does public perception match reality?

Inflation in France currently sits at 3.6 percent, but certain goods have seen greater price hikes than others. Fresh food and energy costs have gone up 5.6 percent and 21 percent respectively compared to this time last year.

“These levels are not extraordinary – we have seen the same thing in 2008 and 2012 – but they are quite rare,” said Fabien Bossy, an economist with ODDO BHF.

“France, like all European countries at the moment, is being shocked by energy prices and the return of inflation which is eroding purchasing power. After a decade where inflation had been well contained in France, voters are beginning to feel the effect on their wallets. Poorer households are those that are most impacted by the increase in fuel and food costs. ”

Petrol has become much more expensive, in large part due to the Russian invasion of Ukraine, with unleaded fuel now topping more than €2 per litre in many parts of France. This could have a knock-on effect of everyday goods as transportation costs increase.

Over the past 20 years, rental costs and bills have increased fairly consistently, by an average 1.6 percent per year. 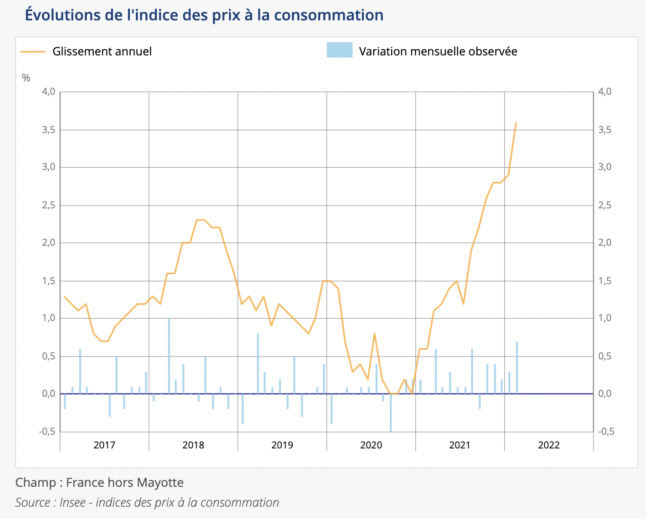 This chart shows inflation in France. The yellow line charts the evolution of the country’s consumer price index. Source: INSEE

But the evidence suggests that most people are actually better off now than in 2017, when Macron took office.

A study from the Institut des Politiques Publiques published in November 2021 found that Macron’s policies had left French households with 1.6 percent more disposable income on average, with only the poorest 5 percent of the population left worse off.

The French Treasury painted an even more positive picture, predicting that household income will be 8 percent higher this year than it was in 2017. It claimed that over the past five years, the overall purchasing power of the poorest 10 percent of the population had increased by 4 percent.

“French purchasing power has increased twice as quickly between 2017-2022 than under the two previous presidential terms,” it said. 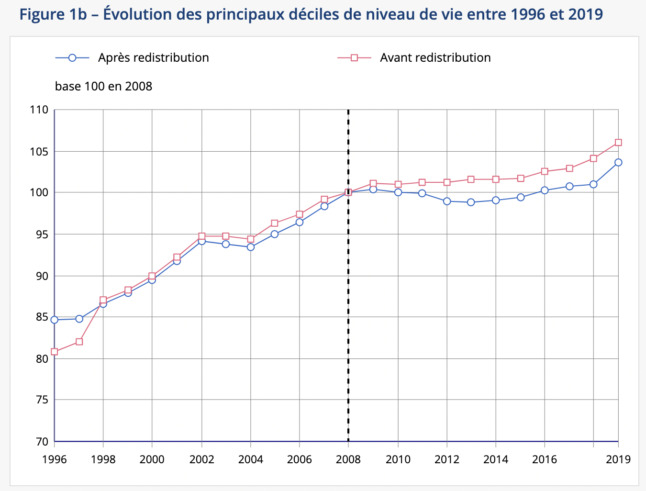 Living standards (household income divided by the number of dependents) is on an upwards trajectory in France. The red line indicates pre-tax while the blue line is post-tax. Source: INSEE

The Russian invasion of Ukraine is likely to drive inflation further in the coming months.

Why do French people say they are getting poorer?

Claudia Senik, a professor at the Sorbonne University and Paris School of Economics, argued that even if people do have more purchasing power on average, it might not always feel like this.

French people spend a significant proportion on their income on fixed costs such as housing, transport, credit card bills, energy and water bills – all of which have risen during Macron’s presidency.

“Many studies of purchasing power group all these costs together as if they were the same. But some price increases hit people psychologically harder than others,” said Senik.

“When the price of essential things like housing or electricity goes up, this causes more anxiety than when the cost of eating at restaurants, flying by plane or buying clothes does.”

According to a survey conducted by CSA Research and LesFûrets, people living in poor households spend close to 68 percent of their monthly budget (€849) on fixed costs while the richest households, despite spending more (€1,647), use just 22 percent of their income for such purposes.

Bréhier, who formerly served as an MP with the Socialist Party, said that the government will struggle to argue that people are better off, even if that is what the evidence points to.

“It is extremely difficult for a politician to tell someone that their feeling doesn’t match the data,” he said.

What has Macron’s government done about the cost of living?

The current level of inflation in France is being driven by a global rise in fuel prices, which is largely outside Macron’s control. Russia’s invasion of Ukraine is likely to exacerbate the situation.

The freeze on household gas and electricity prices, initially brought in to help deal with rising costs over winter, has been extended until the end of June. This measure along with measures such as the chèque énergie, have already cost the government some €15 billion according to Le Figaro.

Speaking to BFMTV on Wednesday, Finance minister Bruno Le Maire said that France could maintain its current freeze on gas and electricity prices if necessary.

“If we need to prolong it because we see an explosion in prices, it seems to me vital to do so,” he said.

Outside of this, the government has taken a number of measures to improve purchasing power:

The government began phasing out the taxe d’habitation, the householders’ tax, in 2018. Around 80 percent of households no longer pay this tax and by 2023, only second-home owners will have to pay it.

In 2018, the government also scrapped the impôt sur fortune (ISF), a tax on the super wealthy. On the campaign trail the previous year, Macron lamented that the tax was “driving hundreds of tax payers to emigrate every year”. The ISF was eventually replaced with a tax on people with property valued at over €1.3 million. The amount of people paying this new tax is significantly smaller than those who were subject to ISF.

In response to the anger of the Yellow Vests movement, Macron also cut tax on overtime hours – a measure introduced under former President Nicolas Sarkozy and later scrapped by former President François Hollande.

He introduced a flat tax for gains made through financial investments, replacing the progressive taxation system in place before.

Across the board, Macron has cut income tax, although by how much varies according to individual earnings. According to the latest figures from INSEE, French households paid €12.3 billion euros less tax in 2020 than in 2017.

Bréhier is not surprised that many voters have barely noticed these tax changes.

“It is not the same thing to not have to pay a tax as it is to see a real salary increase on your payslip,” he said.

“When you don’t have to pay something, you can forget that you ever had to pay it in the first place.”

In light of the Covid pandemic, the French government has taken a number of measures to help the population offset inflation.

France spent a greater proportion of its GDP on social protection measures than any other EU country in 2020.

A graph from the French Finance Ministry shows how social spending skyrocketed during the pandemic. (Source: drees.solidarites-sante.gouv.fr)

The government issued an inflation bonus of €100 to 38 million people in early 2022 and over Christmas paid a cheque énergie to some 5.8 million households to help them cover energy bills.

Following the Yellow Vests movement, the government also introduced a measure dubbed the ‘Macron bonus’, paid by employers to their staff (although it is not compulsory).

While these measures have helped the vast majority of the population maintain or even increase their purchasing power, France does now face a mounting debt problem.

Economist Stéphanie Villers said this could cause difficulties for the French economy in the future.

“We are now in a relatively worrying situation,” she said. “If there is a rise in interest rates on this debt, the public deficit of France would deteriorate.”

Will these measures be enough to win an election?

The government’s measures to boost spending power, particularly during the pandemic, will have helped swing a lot of support in his favour according to Senik.

“People have understood that during the Covid crisis, the government did a lot to maintain purchasing power,” she said.

Even though massive state spending did lead to price bubbles emerging, particularly in the property market, Senik believes the government had little choice but to intervene.

“If the government hadn’t taken measures it would have been much worse,” she said.

Bréhier is less convinced about the electoral impact Macron’s policies.

“I don’t believe that at this stage, the measures have been enough. A €100 cheque here and there is not nothing, but cannot respond to the needs of the population,” he said.

Far-right candidate, Marine Le Pen, has pledged to cut VAT on fuel and electricity as the main lever to boost purchasing power. Centre-right Les Républicains candidate Valérie Pécresse meanwhile has pledged a 10 percent salary increase for all those earning less than €2,800 per month, financed by reducing the social contributions that employers have to deduct from payslips.

The main leftwing challenger, Jean-Luc Mélenchon, has repeatedly cast Macron as an out-of-touch “president of the rich” and promised to raise the minimum wage and pension payments.