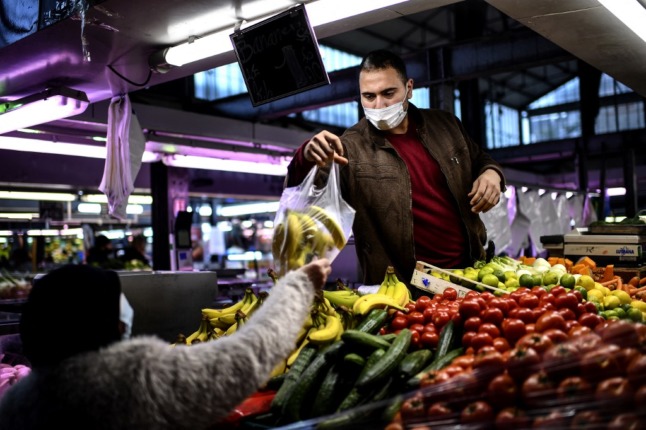 A woman buys bananas in the Parisian suburb of Saint-Denis. A new study has suggested that the cost of fruit and veg in France has increased by nearly 10 percent in two years. (Photo by Christophe ARCHAMBAULT / AFP)

The Association of Rural Families, an organisation that represents some 160,000 families in France and French overseas territories, has released a report that points to big rises in the price of fruit and vegetables.

By analysing the cost of food items in shops across France, the association found that food prices as a whole had risen by 2 percent from 2019-2021 but that fruit and vegetables had become 9 percent more expensive.

“The worrying signs for 2022 mean there is a necessity to give out ‘fruit and vegetable cheques’ so that families on modest budgets are not turned away from health foods,” argued the authors of the study.

Their idea is that the government would subsidise poorer households to buy fruit or veg, in the same way it did to help pay energy bills with the “cheque énergie” in December.

Economists say that a rise in food prices disproportionately impacts poorer families who tend to spend a greater proportion of their income on food and drink.

France launched a National Nutrition and Health Plan in 2001.

The Association of Rural Families said that following the government’s recommendations an economically difficult task for many families, costing €450 per month for a family of four (two adults, a teenager and a child) – which is more than a third of a monthly minimum wage (post-tax). For those who want to eat organic food, the cost is closer to €1,148 per month.

“At that price, organic food is not an option for all budgets,” noted the report.

Conditions like Diabetes and obesity tend to be higher in French overseas territories than on the mainland. Both of these conditions are risk factors when it comes to Covid-19 and other diseases.

The association says that by investing to make food more affordable for poorer households, it would be possible to “break the development of many pathologies linked to the over-consumption of products that are too fatty, sugary and salty”.