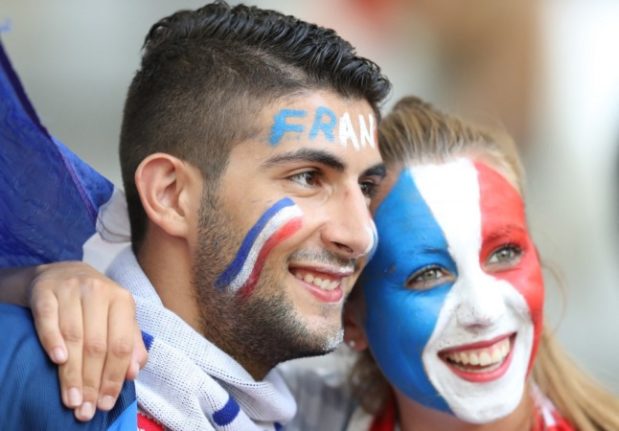 French football supporters smile during a match - but it turns out the country's foreign residents are even happier. (Photo by Valery HACHE / AFP)

Earlier this month France’s National Institute of Statistics and Economic Studies found that the average French person rated their quality of life as 7.4 out of 10 –  but it seems that readers of The Local are much happier.

Out of 100 people who responded to our survey last week, most said they were very happy and the results of our – admittedly unscientific – survey gave a life satisfaction score of 8.5 out of 10.

“Living in France was the best decision we ever made,” said American, Robert Heuer.

A whopping 91 percent said that life in France was better than in their home country, with work-life balance, great public services and magnificent culinary offerings among the reasons why.

Here’s what you had to say:

Unsurprisingly, French cuisine is seen as a key benefit by many of the country’s foreign residents.

Julia Fray, an American living in the Alpes-Maritimes, praised the country’s “wonderful markets”.

Others among you pointed out the obvious, but nonetheless salient truth.

“Wine and cheese is much cheaper,” said American, Barry Epstein.

A British lady called Harriet, living in Paris, praised the city’s “croissants and baguettes”, while an American reader told us how they appreciated having a “more connections with local merchants”.

Louise McTavish, a mother living in Essone, said that France had less of a “junk food culture” compared to her native Scotland.

Another common theme among our readers is an appreciation for what Elaine Denny, who lives in the Pyrenees, described as a “relaxed pace of life”.

“There is a more balanced lifestyle in France between work and home,” said Randy Kerber, perhaps reflecting the fact that French workers spend fewer hours at work than the European Union average.

The French economy has bounced back strongly from the fall-out of the Covid-19 pandemic, with unemployment at a near-10 year low.

“Somehow I make less money, but end up having many more holidays and can afford better quality clothing,” said Fabio Ferretti, an Anglo-Italian.

An Indian reader, Aditya Das, said that the standard of living in France is about the same as in India when it comes to the middle class, “but for the poor, France is much better.”

Many of you said that state-managed services were run highly effectively in France.

“Our taxes are visible in the good roads, schools, parks and free events,” said Scheenagh Harrington, a Brit living in Tarn in the south west.

“The quality of healthcare is first rate and is so much less expensive than in the US,” said Robert Heuer.

But the Brits were impressed too.

“The health system is second to none,” said Susan Smith, who is based in Aude.

While it is an election year, we were still pleased to hear how many of you are enthusiastic about French politics – or rather, French politics in relation to your home country.

“I don’t have to live in a country that would elect Donald Trump president, or even a corrupt half-wit like George W. Bush,” wrote Julia Fray.

Harve Cohen, also from the US, heralded a “better political environment” in France.

Readers from the UK also said the political scene was less toxic here.

“No Brexit, less racists”, declared Howard Turner, from the UK, when summarising why he preferred life in France.

“At a population level, the Brits suffer from an overbearing superiority complex in combination with an attitude of righteous indignation if anyone disagrees with them. The French might be anarchic socialists but they are easier to live with,” said Nigel Thomas.

Perhaps surprisingly, at least for those living in Paris, the friendliness of the local population was also frequently mentioned as a key advantage of life in France.

“When out walking everyone says ‘Bonjour’,” said James Dunkley. “We have found the French people to be very friendly.”

“While we have many American friends and have developed strong friendships with our French neighbours,” said Robert Heuer.