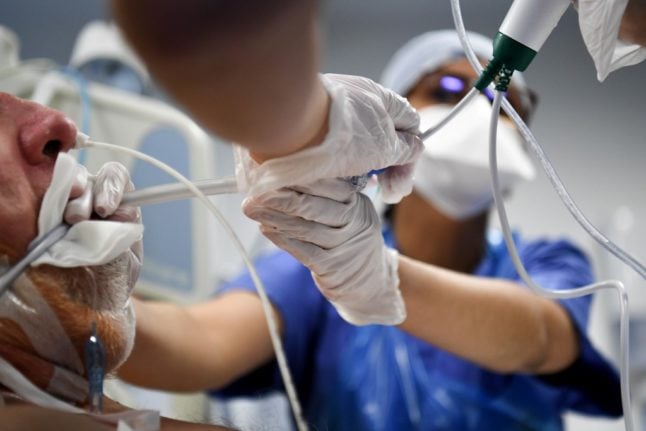 Medical staff tend to a Covid patient in the intensive care unit at the AP-HP Tenon hospital in Paris on January 26th. Photo: ALAIN JOCARD / AFP

On October 28th last year, French President Emmanuel Macron declared that France would enter its second lockdown as a last resort to save hospitals from the rising pressure of patients.

“If we don’t put a brutal brake on the transmissions today, our hospitals will be saturated,” Macron said at the time.

But fast forward a few months to March as a third wave provoked by the rise of new variants, the president has so far decided against a strict, national lockdown, adamant that the arrival of the vaccine will be the game changer necessary to avoid draconian measures.

The pressing question is whether France can get through the third wave of the virus with a regionally focussed “lockdown light” (full details HERE) or if the country is headed, as scientists have warned, “straight into the wall”.

As shown in the graphic below, the weekly average of new Covid cases remains below that of late October and early November. When Macron entered lockdown on October 29th, the number had passed 40,000.

However, the scientific community warns that the rapid increase in cases – up 27 percent since last week – could be the sign that the spread is reaching an exponential pace just as happened in autumn and last spring.

The big difference compared to spring 2020 is that there was very little testing done during the first outbreak so no one really knows the real number of cases back in March. Statistics for October are more reliable however with a testing system in place.

Looking at the incidence rates – the number of new cases per 100,000 inhabitants – several départements have exceeded the 400-mark set by the government as a threshold for entering a ‘lockdown light’.

But the map below shows that no département in mainland France has an infection rate lower than the alert level set by the government – 50 cases per 100,000.

In fact most of the country has an infection rate higher than 250 per 100,000, which is the “heightened alert” threshold.

When France entered lockdown in March and October 2020, it was as a last resort in order to ease pressure on the country’s hospitals.

Hospitals now admit 1,736 new Covid patients every day, when looking at the seven-day average. The number is on the rise – up by 16.9 percent in one week – but the increase is nowhere near as rapid as it was back in October (see graphic below). However, hospital intensive care units are under higher pressure now than they were when Macron declared a second lockdown back in October and the first lockdown on March 17th.

Last spring when France was confined there were 771 patients in intensive care, in October there were 3,036 at the start of the second lockdown. On March 25th, 2021 there were 4,709 patients in ICU.

Nationally, Covid patients occupied 93.1 percent of the total intensive care ward capacity on March 25th, compared to around 60 percent back in October. In fact, the current pressure is approaching that seen at the peak of the second wave in mid November.

Breaking it down a bit, hospitals now admit 378 new patients into intensive care daily, when taking the weekly average. This number is equal to the level on October 29th, the day Macron announced lockdown (see graphic below). But there are crucial differences between the current situation and the one back in October. In October, Covid patients admitted into intensive care were older.

But France’s Health Minister says the average age is lower now in part due to the vaccination programme targeting the most elderly in France but also the fact the so-called British variant seems to provoke more serious cases among younger people.

READ ALSO: Why the average age of patients in France’s intensive care units is getting younger

The younger, more resilient patients currently filling up France’s ICUs have a lower chance of dying, but they also have a longer recovery period in ICU units, which is putting additional pressure on hospitals.

Secondly, France’s hospitals have been filling up for a long time, the patient toll rising gradually and putting a slow, but increasing pressure of already strained hospitals.

Thirdly, before the second wave, hospitals had a break over last summer when patient numbers plunged. There has been no such pause between the second and third waves of the virus, which means staff are even more exhausted than they were back then.

France’s biggest challenge now is to find room for its new patients in hard-hit areas such as the greater Paris region Île-de-France, where Health Minister Olivier Véran on Thursday said hospitals were in the process of postponing 80 percent of all their non-Covid medical activities.

Hospitals had to do this during the first and second waves too, but the government is well aware of the grave consequences such decisions have for non-Covid patients needing other types of treatments and care.

In the hardest-hit areas, the situation is becoming “critical”, the health minister said.

The graphic below illustrates how the pressure on hospitals in Île-de-France has exceeded the level they were under before the second lockdown. The green curve shows new admissions into intensive care units, which currently exceeds 120 per day (weekly average), up from around 80 back in late October.

And it’s not just Île-de-France. The northern region of Hauts-de-France now has more patients in ICU and in hospital in general than during last year’s first wave in spring.

The so-called variant anglais (UK variant) is driving the third wave in France just as it did in the UK after Christmas.

It is now the dominant variant in the country and responsible for over 75 percent of Covid cases. The reason this is so serious is that scientists and the French government have found that the variant is more contagious and also causes more serious forms of the disease. It is the reason why France was unable to really open up after Christmas as planned and forced the government to keep a 6pm nationwide curfew in place for so long.

During the second lockdown, the French government kept schools open and continue to do so calling the closure of education establishments an emergency option.

Covid spread in schools is currently rife. French schools recorded 21,183 Covid cases among their pupils this week, according to the education ministry’s weekly update.

This was an increase from last week’s number – 15.484 – and an all-time record, however it is worth noting that the government has recently rolled out mass-testing in schools and is detecting more cases than back in autumn.

The week France entered its second lockdown schools were on holiday, which means there is no data available for that period. During one week in mid October, 8,223 pupils were contaminated along with 2,063 of the staff, according to the education ministry.

This week, the number of teachers with Covid was 2,515.

Authorities have closed 148 schools this time compared to 27 back in mid October, and 3,256 individual classes are currently closes compared to just 293 in October.

One positive note this time around is the death rate. France registers on average 250 deaths in hospitals per day on a seven-day average, a number that has been decreasing since February when the vaccination campaign for over-75s took off.

While the current average death toll is higher than it was back when Macron declared the second lockdown (roughly 200), the spike that followed in the weeks back then is hoped to be avoided this time around, thanks to the vaccine rollout.

However with the variant considered more contagious and potentially more deadly only time will tell.

France currently has a high death rate than the UK and Germany but one positive note compared to last Autumn and Spring is that the death rate among residents of elderly care homes has plunged thanks to the vaccine programme (see the chart in the tweet below).

So what will happen next?

“In the coming days and weeks we will have to take new measures,” Macron said Thursday, responding to criticism that the new “lockdown light” was too soft to have the necessary impact on the epidemic spread.

“There is no taboo,” he added, perhaps paving the way for sterner measures such as the closure of schools.