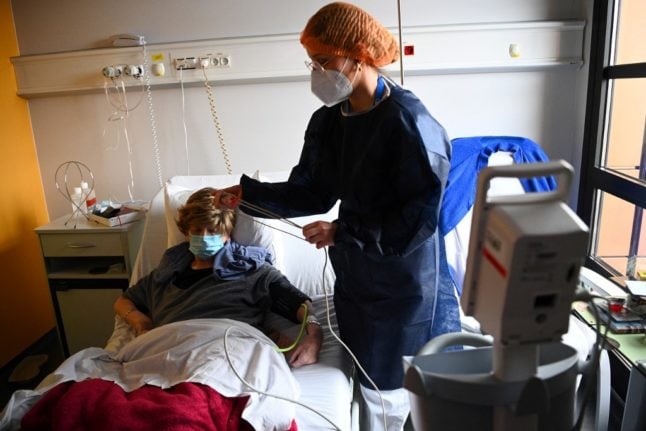 The average age of patients in intensive care is getting younger. Photo: Anne-Christine Poujoulat/AFP

In his weekly Covid update on March 25th Health Minister Olivier Véran said: “We are noticing a the age of patients in intensive care is getting younger compared to the data we had for November and December 2020.

“Since February we have also observed there appears to be a higher risk of being admitted to intensive care with Covid-19 between the age of 15 and 75,” Véran said.

In February Véran said the average age of patients in intensive care had fallen by an average of 6 or 7 years.

“Patients in intensive care seem to be moving towards an average age of around 55 (from 63 previously),” he said.

Olivier Guérin, the head of geriatric care at the University Hospital in Nice, where case numbers have been particularly high, said the same trend can be seen locally, where the average age of ICU patients is now under 60.

“The profile has evolved, we can see it among the patients admitted to intensive care,” he told French TV channel BFM.

But back in February health minister Véran argued the fall in the average age was not a sign that the virus was suddenly more serious for younger people.

“It doesn’t mean that the virus is more serious in young people,” he said in February.

But by March 25th, with over 4,700 patients in intensive care nationwide, the minister had slightly altered his view.

There was, according to Véran “a slight rise in the severity of the illness, in particular among young adults, linked to the spread of variants.

“I often hear that young people are not afraid of anything. Sure, young people fear less but they are not completely safe,” he added.

READ ALSO Is France’s vaccine rollout already having an effect on Covid deaths?

While the so-called British variant, which by March 25th accounted for over 75 percent of cases in France is considered more contagious and more deadly there are other factors at play that explain the lowering in the average age of intensive care patients, namely vaccines.

Vaccination is France has heavily targeted those judged as most vulnerable to the most severe forms of Covid – the over 75s and those with serious underlying health issues.

Vaccinations have now been expanded to the 50-74 age group, but of the 7 million people who have received at least one dose of the vaccine, the vast majority are over 75.

As this chart from French data scientist Guillaume Rozier, founder of the CovidTracker site, shows, the rates of hospitalisation of the over 80s has seen a sharp fall since the vaccination programme. However while this is obviously good news for the people most vulnerable to getting the severe forms of Covid, and provides hope for the future of the vaccine programme, the changing age profile presents its own problems for hospitals.

According to epidemiologist Antoine Flahault, director of the Institute of Global Health at the University of Geneva, says the high number of patients in intensive care is in part due to the lowering of the average age.

“We are vaccinating the elderly with vaccines that are effective against the ‘English variant’, so we should see a decrease in hospitalisations in people over 75,” he said.

“But younger people may overcrowd the hospitals, they are often taken to intensive care for longer periods, so there may be pressure on hospitals.”

Therefore the patients who are admitted to hospital are more likely to need intensive care.

In early March Flauhaut explained in a Twitter thread the changing patient profile.

“Covid is not more serious in younger people,” he said. “But if you are an elderly person, then you will be hospitalised to compensate for diabetes, for example. In young people, it is the most serious cases that are hospitalised and admitted to intensive care. They are not the same types, there will be fewer elderly people and their forms will be less severe.”

Younger patients are also less likely to die of the virus than older ones – but they do tend to spend longer in intensive care, putting further pressure on the healthcare system.

By March 25th, across France, intensive care occupancy stood at 93.1 percent, but in areas with high numbers of cases intensive care units are full and the government has demanded hospitals expand capacity, particularly in the Paris region.