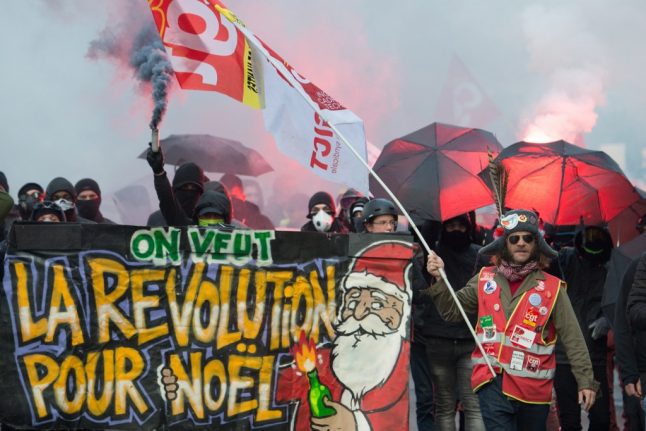 LATEST NEWS: CLICK HERE to read about how the strikes in France will impact transport on Wednesday

Is the situation on public transport likely to get any better on Tuesday?

No. Sorry to be blunt, but it's unlikely. Many of the big unions that represent transport workers have already declared unlimited strike action, so there is no end date in sight.

Things may start to ease a little in the coming days as some employees go back to work.

READ ALSO French transport strikes, what happens next and how long will they last?

French workers lose roughly one day of pay for every day they strike, so many workers who are feeling the financial hit return to work after a few days. On Thursday and Friday last week – the first two days of the strike – 85 percent of SNCF train drivers walked out, but on Monday the figure was only 77 percent – which is why the rail operator managed to run nearly 15 percent of its usual services as opposed to 10 percent last week.

Obviously this is still pretty disrupted, but slightly less so. And the general pattern for long-term strikes in France over the years is that they have become less disruptive as time goes on.

However, Tuesday may actually be a worse day.

Why, what makes Tuesday worse?

The unions have called for another day of demonstrations and walk-outs on Tuesday as they ramp up the pressure as the government presents more details of its plans for a pension overhaul.

While many transport workers are on unlimited strike actions many others, such as teachers and postal workers, did a one-day walk out on December 5th. Some of them will be doing another one-day strike on Tuesday and others will be participating in marches and demonstrations planned for French cities.

Some schools may close as teachers walk out, so parents may be faced with finding alternative childcare arrangements.

Just next door students and teachers block a school. Tuesday is another big strike day for teachers. pic.twitter.com/TP1gfMConG

So what are the services on Tuesday?

In the air, airlines have been asked to cancel 20 percent of their normal services. As on Thursday and Friday, most airlines will try to minimise disruption to long haul flights, but any flights going in or out of Paris' three airports – Charles de Gaulle, Orly and Beauvais – or Lyon, Marseille, Bordeaux and Toulouse airports could be affected.

In Paris RATP workers – who run the city's public transport services – confirmed on Monday afternoon that they will be extending their strike. The biggest union – UNSA – said it would be extending its action until at least Friday, December 13th, and had not ruled out action at the weekend, while several other unions representing RATP workers said they were looking at extending until at least Thursday.

This means that services are similar to Monday's with many Metro lines not running at all and severely disrupted services on trams, buses and RER suburban trains. More info on the RATP website here. On the trains many services were cancelled in advance and around 85 percent have been cancelled overall, roughly the same as on Monday

Traffic on the roads in the greater Paris region is also very heavy as people take to their cars.

Speaking of driving, unions are still blockading seven of France's eight oil depots which means hundreds of filling stations across France are running short of fuel. Click here for an interactive map of closed filling stations.

Yes, bad news if you've got tickets for the ballet or opera in Paris – Ballet de l'Opéra employees are taking part in the strike and around 10 percent of shows have been cancelled.

There will also be cancellations at some tourist attractions in Paris, not because their staff are striking but because they are struggling to get to work without public transport. Some will also be opening later than usual, the best thing is to check out the website of the place you plan to visit before setting off.

Any places to avoid?

There will be a march in Paris, starting at Les Invalides (Place Vauban) in the 7th and ending at Denfert-Rochereau in the 1'th.

Trade union organised marches are not generally violent, but the demonstrations in Paris and Nantes on Thursday saw some trouble from rioters who smashed windows and set vehicles on fire. Police in Paris fear there may be more trouble on Tuesday and will be out in force. In Paris, police have ordered shops, bars and restaurants along the route of the march, which starts at 1.30pm, to close.