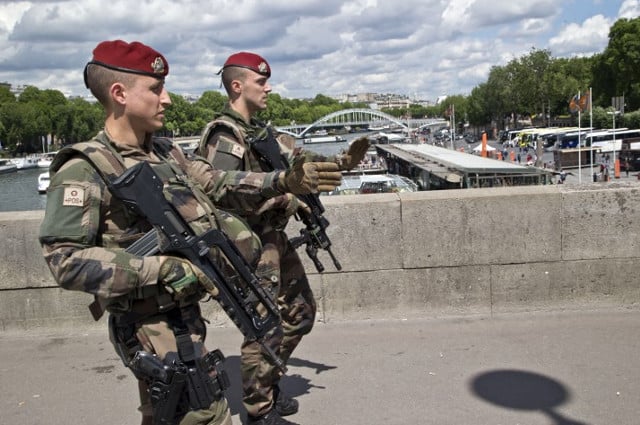 French soldiers of the "Operation Sentinelle". Photo: AFP
The Isis terror group has frequently called on their followers to attack soldiers and police in France, who they see as a legitimate target because they represent the French state.
Before Friday's attack, France's forces of security and law and order have been targeted numerous times before and often fatally.
August 9th: A man rammed a car into soldiers in Levallois-Perret in the northwestern suburbs of Paris. No one was killed.
The attacker fled the scene and after a chase armed officers shot the driver five times. He was later arrested. August 6th: A man brandished a knife in front of tourists and security forces as armed soldiers who are permanently stationed at the Eiffel Tower surrounded him and ordered him to drop his weapon, which he did without attacking anyone.
He later told investigators he wanted to kill a soldier.
June 19th, 2017: An armed man crashed his car that contained a gas canister into a police van at the Champs-Elysée before his vehicle exploded into flames.
The driver died at the scene but there were no casualties reported and no police officer or member of the public was injured. June 6th, 2017: A man calling himself a “soldier of the caliphate” attacked a policeman on patrol outside Notre-Dame cathedral in the heart of Paris armed with a hammer and two knives as he shouted, “This is for Syria”.
After landing a blow on the officer another policeman responded by firing twice at the attacker, who was left injured and lying on the ground. He was later taken to hospital. The policeman sustained minor injuries.
April 20th, 2017: A gunman opened fire on police officers on Paris' Champs-Elysées, killing policeman Xavier Jugele and leaving two others in critical condition.
The shooter was also killed at the scene. He was already known to intelligence services for having already expressed a desire to kill police officers.
The attacker was named as 39-year-old 'Karim C', who was born in France. March 18, 2017: An attacker walked onto the departures floor of Orly airport's south terminal where he grabbed a female soldier on patrol with two male colleagues.
He fought with the female soldier, trying to take her assault rifle and succeeding after a couple of attempts. He was then shot dead by one of her colleagues.
February 3rd, 2017: A man pulled out two machetes and attacked one of the soldiers standing guard at the entrance to the underground Carrousel du Louvre shopping centre, which is next to the world famous art gallery.
Soldiers tried to fight him off with close contact but were unable to contain him. They then opened fire.
June 14th, 2016: The murder of a policeman and his partner in Magnanville, a town to the west of Paris added to the list of members of the French security forces who have been targeted by Islamist militants.
The attacker, identified as Larossi Abballa, claimed allegiance to the Islamic State group after stabbing Jean-Baptiste Savaing to death. January 7th, 2016: A year to the day after the Charlie Hebdo attack, a man identified as Tarek Belgacem tries to attack a police station in Paris with a meat cleaver and a device that turns out to be a fake bomb.
He is shot dead by police, who find a pledge of allegiance to the Islamic State group on his body. February 3rd, 2015: Moussa Coulibaly, unrelated to Amedy Coulibaly, uses a knife to attack three soldiers guarding a Jewish community centre in Nice, southern France.
January 8th, 2015: Islamist Amedy Coulibaly shoots dead a policewoman in Montrouge, south of Paris, before taking hostages the next day at a kosher supermarket, where he kills four more people. He later dies during a police assault.
Coulibaly was linked to Cherif and Said Kouachi, who attacked the satirical weekly Charlie Hebdo on January 7, 2015 during which 12 people, including two policemen, are killed.
December 20th, 2014: Bertrand Nzohabonayo is shot dead as he cries “Allahu akbar” (God is greatest) as he attacks police with a knife in Joue-les-Tours, in central France. May 25th, 2013: A soldier patrolling the business district of La Defense, west of Paris is injured by Alexandre Dhaussy, 22, a convert to Islam.
Dhaussy is arrested a few days later and claims his motive was religious. A court decides that he suffers from psychiatric problems.
March 11th and 15th, 2012: Self-proclaimed jihadist Mohamed Merah kills three French soldiers, two of whom are Muslim, in Toulouse and Montauban in southern France.
He later attacks a Jewish school on March 19, 2012, where he kills three children and a teacher. Merah is shot dead on March 22 by police.