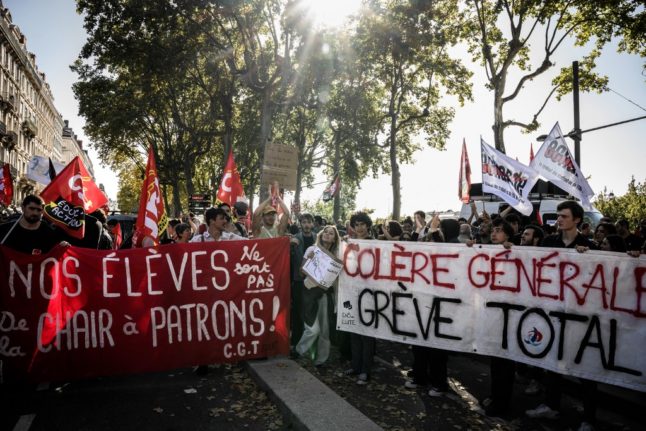 French strikes tend to get a lot of international media attention. Photo by JEFF PACHOUD / AFP

Some countries even issue travel warnings to their citizens about French strikes, but let’s be honest – strikes in France are hardly unusual. Whether you cancel your trip is of course a personal decision, but we’ve got some of things to bear in mind when making your choice.

The first thing you need to think about is your personal safety. Strikes in France are noisy and attention grabbing and tend to get on the news. This applies even more to demonstrations, especially if there is violence during the demo.

French picket lines are often noisy but violence is rare and violence directed at passers-by who are not involved in the dispute is vanishingly rare.

It’s true that trouble can flare on demos – which sometimes happen at the same time as strikes but not always – but this tends to be from a small minority, usually at the end of the demo. Marches tend to be concentrated in the big cities, especially Paris, with routes published in advance so that you can stay away.

It’s not unusual for violent ‘casseurs‘ (hooligans) to cause trouble at the end of a march, but their violence is usually directed at objects or the police, not members of the public, as the below video of the old man walking through a group of casseurs shows.

The worst case scenario is that you get caught in an area where police are spraying tear gas – their preferred tactic for dealing with violent protest – which is pretty unpleasant if you breathe it in.

But it’s not at all uncommon to enjoy a lovely day out, and then see on the news later that trouble had flared nearby and you weren’t even aware of it – and of course the media tend to pick the most dramatic images to illustrate even fairly mild protests.

What strikes are intended to do is cause disruption, and in that they’re often pretty effective (French workers have had enough practice, after all). So while safety is not a concern, there is the possibility that your plane, train, bus or ferry might be delayed or cancelled.

But just because there is a strike, don’t assume that everything will be cancelled – strikes vary hugely in how much disruption they cause.

READ ALSO The vocab you need to understand a French strike

Which unions are involved – the French union landscape is pretty complicated and divides along political lines so that, for example, a train driver could be represented by any one of six different unions – ranging from the militant to the moderate.

For this reason, strikes only really cause widespread disruption when all the unions agree to strike on the same day. Otherwise you’re likely to see ‘moderate disruption’ – some services cancelled but others running as normal. If this is the case you will probably be able to get to your destination, it might just take a little more time with unusually crowded trains/buses.

If you have a pre-booked ticket for a cancelled service, you can usually take the next one at no extra charge.

If you’re travelling by plane things are a bit less flexible, and the best thing to do is check with your airline.

Check strike timetables – essential workers such as transport workers are required to give 48 hours notice of their intention to strike, which means that operators create ‘strike timetables’ of the services that will be running, which are usually available 24 hours in advance. You can use these to see what is running and whether it’s worth travelling or not.

Ignore union predictions – unions always claim in advance that their protest will bring the country to a complete standstill. This is generally just a rhetorical flourish that you can probably ignore – check the strike timetables for the full picture.

You can also check out The Local’s strike section HERE for the latest news on strikes and which services will be affected.

Unions often target transport services because these are highly visible, and these are also the type of strikes that tend to get international media coverage, because they affect visitors to France.

But actually hundreds of small strikes happen in France every year, and most of them barely get any media coverage at home, never mind internationally. Therefore don’t be surprised if, for example, you have booked tickets to a museum and turn up on the day to find that it is closed because of a strike.

There are limits to the right to strike in France, and most of them concern emergency workers like the police, healthcare workers and firefighters.

When these groups are in dispute they often declare a ‘grève‘ (strike) which is reality a protest – for example you might see doctors demonstrating outside a hospital, and police taking part in symbolic actions such as laying down their handcuffs.

But a minimum service is always in place, so if you have an emergency or need medical care you will be able to access it, even if there is a strike on.

Other things to watch out for

As we mentioned, sometimes strikes are accompanied by demonstrations, but at other times demonstrations happen even if there is no strike.

Not strictly a strike, but still an industrial action, you will sometimes see what are known as Opération escargot – these are rolling roadblocks where drivers – usually hauliers or farmers – make known their anger by creating traffic jams on the roads.

And if you’re planning on attending a football game in France, be aware that there are occasional problems with fan violence within the French game.

The wisest way to deal with French strikes is to try and copy the French, who tend to be pretty philosophical about them.

Yes, it can be extremely annoying if your plans are disrupted but strikes have been a fact of life in France for decades and that’s unlikely to change in the near future so just breathe deeply and maybe go and get a coffee and a pain au chocolat (or a glass of wine) while you wait.