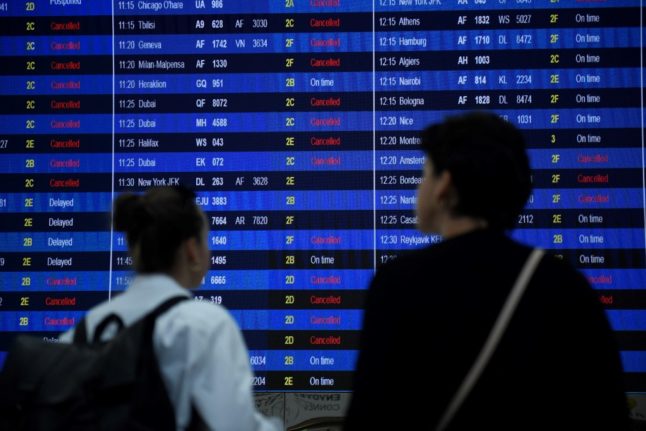 Strikes are a fact of life in France. Photo by JULIEN DE ROSA / AFP

1 A ‘strike’ is not always a strike

The French use the word grève to refer to all types of industrial action – from workers walking out to lesser actions such as holding demonstrations or working-to-rule (when workers refuse to do any overtime or extra tasks).

Major disruption to services usually only happens when workers walk out. Certain jobs – mostly emergency services and health professionals – are limited in what type of strike action they can take, so a grève in one of these areas usually means a protest or demo, rather than a walk-out.

So if you see there is a grève at your local hospital, it doesn’t mean that your appointment will be cancelled, you’re just likely to see a group of medics outside holding up banners and posters explaining their grievances.

2 The union alphabet soup is important

France has a lot of different trade unions, and many of them are known by their initials (CGT, FO, CFDT, FSU etc). Some countries operate on a ‘one sector, one union’ basis so that, for example, all train drivers are represented by one union.

In France the unions tend to divide along political lines, and have multiple different branches so that French train drivers could be represented by any of six different unions – from the highly militant CGT to the more moderate CFDT.

This is important in terms of the impact of the strike action, as when only a single union calls a strike it means that most of the employees still go into work and service disruptions are kept to a minimum. It’s only when the unions join together that they’re able to call out large numbers of workers and services take a big hit – so when trying to figure out if you should cancel your plans because of a strike, check how many unions are supporting it.

3 It’s not only strikes to look out for

As well as the traditional action of walking out of work, French workers who are in dispute with their bosses or the government have other aces up their sleeves – the two that cause the most disruption are blocage and opération escargot. The blocage means a blockade and is often performed by workers at depots to prevent goods from getting out, for example a blocage at an oil refinery prevents fuel trucks getting out so filling stations quickly run dry.

An opération escargot is usually performed by hauliers or farmers and it’s a rolling roadblock – vehicles driving alongside each other and very slowly along a road and therefore causing massive traffic jams.

Both of these actions can cause a lot of disruption with relatively few people involved.

Workers in ‘essential’ sectors, which includes transport, must give 48 hours’ notice of their intention to strike. Bosses then use this information to create strike timetables, which are usually published around 24 hours in advance.

If you have a trip booked, you will be informed by email or SMS if your service is cancelled, if you haven’t booked or are taking city public transport you can check the website of your transport operator to see what is running.

You can check both the detailed timetable and also the overall forecast to see what disruption is likely – for example if the service is ‘quasi-normal‘ or perhaps has ‘9 trains in 10’ running, you know there isn’t much to worry about. If the service is ‘fortement perturbé‘ and has only 1 in 10 trains running, you know to either allow plenty of extra travel time or change your plans.

French strikes are often disruptive and usually noisy and attention grabbing, but it is rare for there to be violence and visitors to France should not worry about their safety if they hear there is going to be a strike.

Strikes are sometimes – but not always – accompanied by demos or marches, while sometimes protests take place even if there is no strike action.

These manifestations are usually well-organised, but sometimes trouble flares, especially towards the end of the demo, if the ‘casseurs‘ (hooligans) or Black Bloc (semi-professional rioters) get involved.

As a passer-by you are not at risk of being attacked, but if you happen to be in the area where trouble is breaking out you can end up caught in the crossfire or – more likely – breathing in the tear gas that French police use liberally if protests turn violent, which is pretty unpleasant.

Demo routes are published in advance and the best advice is to stay out of the area where they are taking place if you don’t want to be involved.

. . . and remember that strikes serve a purpose

It’s extremely annoying and inconvenient if your plans are disrupted by a strike, but remember that the right to strike has won crucial rights and protections for French workers over the years. French workers are along the most militant and also enjoy some of the best social and workplace protections, and that’s probably not a coincidence.

It’s why French people tend to be fairly phlegmatic about strike disruption, because they know that it’s all part of the social contract.