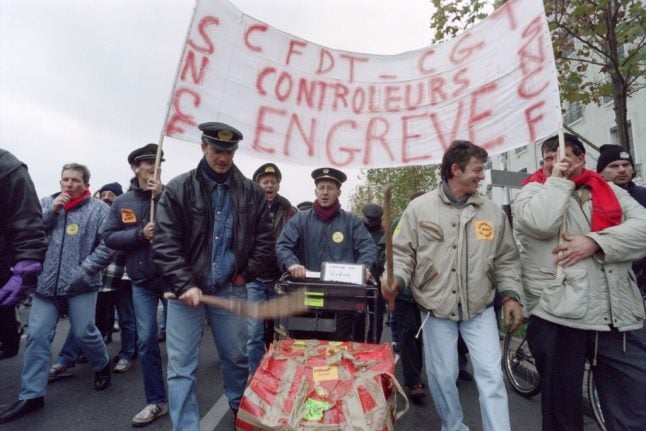 What to say when strikes hit France. Photo: AFP

While the French certainly strike less than their reputation suggests – in fact France doesn’t lose a significantly higher number of work days to strike action than many other European countries – strikes certainly do happen in France.

And when they do, they are often targeted at the public sector – so are highly likely to impact your life.

If you do find yourself caught up in one, here are the French words and phrases you will need.

Une grève/en grève/les grevistes – Let’s start with the basics, a strike is une grève and a worker who is taking strike action is en grève – on strike. The collective term for striking workers is les grévistes.

Un movement social – This is another phrase for any type of industrial action or social movement that you will frequently see on announcement boards to explain the reason for a closure or delay. Les syndicats – The unions. France has a number of different unions even within the same professions, so for example railway workers can be represented by several different unions. In general there is only very severe disruption if the unions coordinate their strike action.

Perturbé – Disrupted. One reason France seems to have so many more strikes than anywhere else is that the strikes that do take place tend to target public services, particularly transport so are highly visible and very disruptive. You will frequently see and hear announcements on public transport networks that services are perturbé en raison d’un mouvement social – disrupted because of strike action.

Retardé – Delayed. If you train/bus/plane is delayed you will see retardé on the notice board, or more specifically xx minutes à tard or xx minutes retardé –  xx minutes late.

Compensation – If you have been delayed by strike action you can claim compensation, and helpfully the word is the same as in English.

Une trêve – a truce. If a strike falls over a major public holiday such as Christmas, it’s possible that strikers can declare a ‘truce’ then resume industrial action after the holiday. You may see newspapers talking about the possibility of une trêve de Nöel – a Christmas truce, where for example rail workers would break off their strike in order that French people can travel to be with their families at Christmas.

And moving away from the practicalities, you might also want to discuss the strikes or express your feelings about them. If you’re staring up a notice board blithely informing you that your flight/train/bus has been cancelled, you might need someone to vent at.

La pagaille – Chaos or a shambles. You may find that in contrast to foreigners, the French are fairly phlegmatic about strikes. Yes they happen and yes they are annoying but you’re unlikely to see many French people going totally berserk about them. This could be because they are aware of the link between strong unions and the protections and social support that employees in France enjoy. Nevertheless, grumbling is always fun and if you want to describe a situation as a total shambles, this is a good word. For example La grève a semé la pagaille à la gare Montparnasse – The strike has caused chaos at Montparnasse station.

Putain – and of course if you’re enormously inconvenienced by a strike (for example you have just learned that all the trains available to get you home in time for your own wedding have been cancelled) you could use the best (and rudest) French word of them all. If you’re getting all sweary, you could also refer to the situation as bordel – fucked up – or bordel de merde – totally fucked up.

Once you’ve finished swearing about it, it might be time to get into an interesting political discussion about the issues raised by the strike action.

Bras de fer – to strong arm somebody or to stand firm during a conflict. At strike time, newspapers will frequently use this to refer to the positions of the strikers or the government eg Bras de fer sur la réforme des retraites –  [The government is] standing firm on the pension reform.

Le Gréviculture – Slightly controversial addition this. You might hear people using it but we wouldn’t advise using yourself as it can be a sensitive subject in France. The word means ‘strike culture’ and people sometimes use it to grumble about a lot of strikes, but the phrase has some baggage.