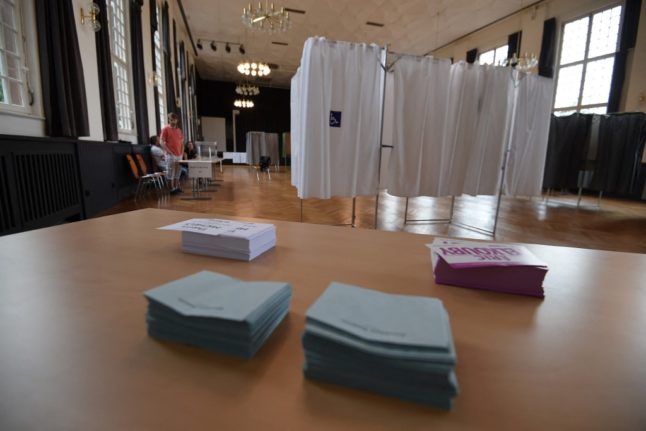 France has the most cumbersome election system in the democratic world, punishing for politicians and exhausting for voters.

Britain, Germany, the United States – most countries in fact – scrape by with one election day to choose an executive and a parliament. France requires four election days in a little over two months.

READ ALSO What happens on Sunday and why are these elections important?

Many reasons are offered for the declining turn-out in French parliamentary elections. Voter fatigue is rarely mentioned.

I went campaigning this week with a young centre-right candidate in Chartres, 80 kilometres south west of Paris. The reaction of local people to the sight of a politician (any politician) was disturbing.

Remember “Brenda from Bristol”, who became famous for saying “Not another one” when Theresa May called a snap general election in Britain in 2017?  This week we met dozens of “Charlottes from Chartres”:  people in the age-group which does still vote in large numbers (50-plus). They fled at the sight of a campaigning politician.

Those people who did consent to talk to us were not so much anti-system as glibly anti-politics. They wanted politicians to do more about inflation or crime or hospitals but they did not want to engage in any discussion of political process or elections.

The pollsters say that the turn-out in the first round of the parliamentary election this Sunday (the third election day in  seven weeks) will be the lowest in the 66 years of the Fifth Republic. Most polls predict that only 46 to 47 percent of voters will cast a ballot, compared to 74 percent in the Presidential election in April.

I fear that it may be even lower than pollsters predict. A pair of two-round elections in rapid succession may have seemed like a good system in a more deferential, less anti-political age. It has become a machine for destroying democracy.

Admittedly, the lack of interest in what could be a pivotal parliamentary election also has other causes. Part of the blame must go to President Emmanuel Macron. He delayed a decision on a new Prime Minister and government for over three weeks, hoping to neutralize a parliamentary campaign which initially appeared favourable to his centrist alliamce, Ensemble!

This strategy has been a failure. The ragbag Left-Green alliance Nupes (Nouvelle Union Populaire, Ecologique et Sociale) has been allowed to dominate what has limply passed for an election campaign. The once floundering centre-right ex-Party of Government, Les Républicains, has recovered and may now win up to 70 seats.

Three weeks ago the opinion poll projections for the second round suggested that Macron would win a comfortable victory – taking up to 350 seats in the National Assembly.

The latest polls suggest that he might still scrape a majority (289 seats and above) but may have to settle for the largest bloc. To govern France and push through the promised reform of pensions, schools and hospitals, Macron and his Prime Minister, Elisabeth Borne, would then have to make deals with the centre-right and a handful of independent centre-left deputies.

This is déjà vu all over again. Similar warnings were made in the last days before Round One of the presidential elections in April when the far-right leader Marine Le Pen was rising in the polls.

It is as if Macron and his allies can think of only one way to win an election: the scarecrow method. Vote for us or look what you’ll get.

It might work again, especially between the two rounds next week. Some centre-right and hard-right voters will switch to Macron’s alliance rather than risk a government dominated by the hard-left, anti-Nato, anti-EU Jean-Luc Mélenchon.

But Mélenchon, although widely loathed, is not quite so effective a scarecrow as Marine Le Pen.  On a very low turnout, a surge of votes for one camp can produce a bizarre result.

In theory low turn-out is bad for Mélenchon and the Left. Their electorate is heavily weighted towards the young and less well-off and concentrated in metropolitan and inner-suburban constituencies. These are just the people and places which vote least in parliamentary elections.

But Mélenchon – whatever one thinks of his personality and programme – has generated enthusiasm and hope and momentum in the long-divided Left.  If he can get out his vote this Sunday and next – and Macron doesn’t –  the Nupes alliance could win over 200 seats.

Can it win the largest bloc of seats? Even a majority? Will Mélenchon be the next Prime Minister and reduce Macron to an impotent figurehead? No. Electoral accidents can happen but not quite so big an accident as that.

Less than 30 percent of French people say they want Mélenchon as PM. More than 50 percent say they want Macron to have another parliamentary majority, even if they are not willing to leave their homes to vote for it.

How can French voters be encouraged to take parliamentary elections more seriously? Rebuilding the system, possibly with a one round proportional system, is one of the reforms promised by President Macron.

But the country is now split three ways between the Left, Far Right and a Macron-compatible centre. A one round Proportional Representation system would produce a series of hung parliaments and revolving governments – just like in the 1930s and 1950s.

It is a conundrum. But I learned one lesson from the Charlottes of Chartres this week. Too much politics (and too many election days) kills politics.