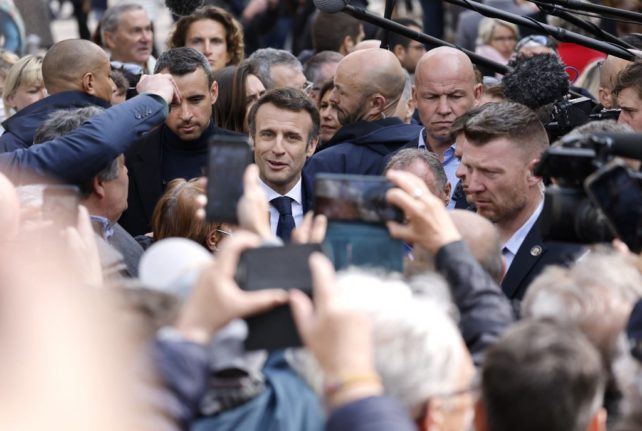 Local residents take pictures of Emmanuel Macron as he walks in the street during a campaign visit in Fouras, western France. Photo by Ludovic MARIN / AFP

Macron, who is due to address a rally for the first time in his re-election campaign on Saturday, attended a meeting at the headquarters of his La République en marche (LREM) party late Wednesday.

“The president-candidate called for a collective mobilisation, based on the idea that nothing is won yet,” the source, who took part in the meeting, told AFP.

His attendance, which had not been announced by his team, came after a series of polls showed that far-right leader Marine Le Pen has been catching up on Macron, who has long been the overwhelming favourite to win.

The latest Elabe poll published on Wednesday showed Le Pen winning 47.5 percent of votes in a second round run-off against Macron, who was projected to garner 52.5 percent, a smaller margin than in the same poll last week.

After weeks of 'Macron is going to win this, what a boring election', the IFOP daily poll now has Le Pen on 47 percent in the second round and Macron on 53 percent😬 pic.twitter.com/WGcgNh6eqZ

With a margin of error of up to 3.1 points, those figures suggest Le Pen could theoretically emerge as the winner in the second round.

Steering clear of scandals and of debates about Ukraine, the far-right leader said she had “never been
so close to victory.”

Le Pen has been aided by a drop off in support for anti-immigration pundit Eric Zemmour.

Where Zemmour has hammered his conspiracy-theory theme of a supposed “great replacement” of white French people by newcomers from the Middle East and Africa, Le Pen “made the opposite choice, to normalise, to soften, to smooth her words,” said Stanford University professor Cecile Alduy.

“Her programme hasn’t changed at all on Front National fundamentals like immigration and national identity, but she’s used a different vocabulary” around cherished French values like secularism and even feminism, Alduy added.

Most polling for the first round still has Macron in a strong lead, but French elections take place in two rounds.

The two highest-scoring candidates from the first round go through to a head-to-head vote two weeks later, and polls suggested that Macron and Le Pen are the most likely candidates for the second round – a re-run of the 2017 vote.

But recent polls suggest that this time the result could be much closer, with many supporters of the left-wing firebrand Jean-Luc Mélenchon telling pollsters that they would vote for Le Pen over Macron in a second-round vote.

Macron’s team are also worried about the abstention rate, with some polls suggesting that just 67 percent of French people will vote.

Macron’s re-election had been seen by many observers as almost a foregone conclusion, as polls suggested Le Pen would again be his rival in the run-off, a repeat of the vote five years ago.

But he formally entered the election campaign only at the last minute, citing his diplomatic efforts to halt Russia’s war in Ukraine, while Le Pen has been pounding the pavement across France for months with a promise to increase voters’ spending power as inflation bites.

Ministers and Macron himself proudly point to tallies of tens of billions of euros (dollars) of public money mobilised to ease rising costs at petrol pumps and on gas and electricity bills — but many voters still feel the pain in their pockets.

For her part, Le Pen has vowed to slash fuel taxes in response to the spike in prices around the Ukraine war and sanctions against Russia.

Her spokesman Julien Odoul told RFI radio Thursday that “we have a historic opportunity to get national ideas into power with Marine Le Pen.”

Those include removing social benefits from many foreigners living and working in France, which the RN claims would save 9.2 billion euros ($10.2 billion) per year.

And recent days have seen the government on the defensive over liberal use of public money on expensive management consultants such as US-based giant McKinsey.

EXPLAINED What is the Affaire McKinsey and will it derail Macron’s election bid?