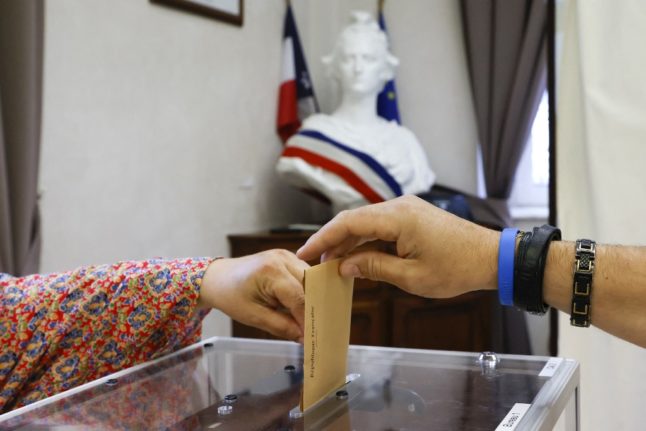 Will the French turn out to vote in April? Photo by Ludovic MARIN / AFP

Two thousand kilometres to the east, people are dying for the right to choose their own government. In France, people will probably stay at home in record numbers when the country votes for its President later this month.

The “bof” vote – “why bother, nothing changes” – has been growing in most types of French election in the last two decades. It is an especially annoying and stupid point of view this year – and not just because Ukrainians are proving that democracy is fragile, precious and worth fighting for.

Would nothing change if Marine Le Pen became President of the Republic? Or Jean-Luc Mélenchon? If either of them became President, the broad consensus of French governance for the last 60 years – Europeanist, relatively tolerant, relatively pro-market – would be overturned.

A Le Pen victory (very unlikely but more plausible than it appeared a couple of weeks ago) would add deep domestic and European crisis to international and geo-political crisis. Whether you think that would be a) a good thing or b) a bad thing, it is probably worth the minor inconvenience of walking or driving to a local school or town-hall and placing a ballot-paper in a box.

And yet opinion surveys suggest that the turn-out in the first round of the Presidential elections on April 10th may be as low as 67 percent.  Last time around in 2017 it was 77.7 percent. The lowest it has ever fallen in France (since the present system began in 1965) was 72.6 percent in 2002.

The reasons given for not voting in one Ipsos survey included: “nothing ever changes”; “there is nothing new on offer this year” (as if elections were a shopping mall); “Macron is certain to win anyway”.

It should be pointed out that, compared to Britain or the US, the French have a pretty good voting record in national elections. The turnout in Britain in 2019 was 67.3 percent. The typical turnout in US presidential elections is 53 percent. It leaped to 66.8 percent in 2020 (to Donald Trump’s fury).

Nonetheless, there has been an erosion of French trust in democracy in recent years which is disturbing – and often shallow and self-contradictory. Some of the original Gilets Jaunes leaders are calling for street demonstrations if Emmanuel Macron is re-elected on April 24th. His victory would somehow prove, they say, that the system is rigged.

But will the French turnout really be so low this year? If so, why? And what are the implications for the result of the first round and the second?

In my opinion, it may not be quite so low as the pollsters think. Contradictory forces are now in play. Complacency and disaffection are giving way to rising anger at the cost of living and the surge in fuel and food prices.

A study by INSEE, the official statistics agency, finds that  French people are more discontent about their purchasing power and economic prospects that at any time other than the start of the 2007-8 financial crisis and the beginning of the first Covid lockdown in 2020.

That anger is already showing in the polls, where President Emmanuel Macron has slipped from 30 percent of first round support to 27 percent. Marine Le Pen (far right) has zoomed to 21 percent and Mélenchon (hard left) to 15 percent.

The second round polls are also tightening. They give Le Pen an average of 45 percent to Macron’s 55 percent. That is approaching the range in which, to quote a senior Macron campaign official, “accidents can happen”.

Low turnout, or “abstention” as the French media calls it, sometimes completely skew the outcome of an election as we saw in the regional elections last summer. Abstention is never evenly distributed among social groups and generations. The older and richer and the better educated that people are, the more they are likely to vote.

But the rising anger at food and pump prices is concentrated among the less well-off. Resentment at what is seen as government aloofness and inaction – “why is Macron so worried about Ukrainians and not us” – is  already bringing out a “hidden” popular vote. Hence, in part, the growing strength of Le Pen and Mélenchon.

Here is a great paradox. Emmanuel Macron would probably benefit, in the first round, from a lowish turnout because that will increase the share of well-off, more educated, older voters. But a low turn-out would be a bad thing for him politically. It would be blamed, in part, on the lack of intensity of an election campaign in which the incumbent and poll-leader was often an absentee candidate (for good reasons and bad).

In the second round, the calculations change. Many left-wingers say they will not vote again for Macron to keep out Le Pen (if as seems likely she is his opponent). In a big Ipsos survey for Le Monde this week, 50 percent of Mélenchon voters said they would abstain in a Macron-v-Le Pen run-off.

That refusal to take part in another “Republican Front” against the far right is already baked into second-round polling surveys showing Le Pen at 45 percent (and some even higher). All the same, a very variable turnout in the second round – a big and angry blue-collar vote and a pompous no-vote by middle-class lefties  – could bring the Macron-Le Pen score very close indeed.

I still believe Macron will win. But accidents CAN happen.