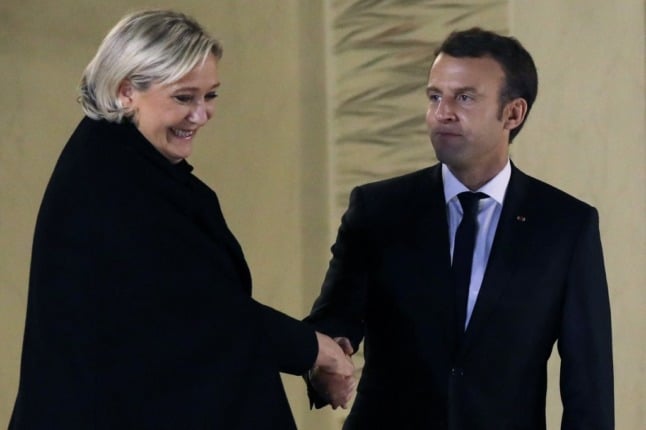 Here is what we learned from their appearances:

Macron has been busy

Challenged by the journalist for not having taken part in a real presidential debate with other candidates, Emmanuel Macron said he had been busy.

He pointed towards the “historic” fuel rebate, EU and NATO negotiations, and a succession of phone calls to Russian President Vladimir Putin.

“All of that takes preparation. It takes work. A President needs to be giving it his all,” he said.

Polls suggest that the first round of the French presidential election could see record levels of abstentionism – which according to some analysts and voters is because people have the impression that there is no real debate.

“If we want to have a strong democracy, go and vote,” insisted Macron.

Earlier in the day, on of his ministers told FranceInfo that the real democratic debate would take place in between the two rounds.

Le Pen wants to tap into the cost of living crisis

“The French deserve more than the sacking of society, alienation from politics and seeing their purchasing power decrease year after year,” said Le Pen during her interview.

Most serious economic studies actually suggest that purchasing power for the vast majority of the population has actually increased under Macron’s presidency – even if it remains a top priority for voters.

Le Pen proposed cutting VAT on all energy sources. She said she would finance such a move by cracking down on fraud and immigration – and estimates that the average French person would be €150-200 richer by the end of the month.

Reforming pensions not a priority for Macron

Macron batted away claims that reforming pensions, by lifting the retirement age to 65 and raising minimum pension payments to €1,100 per month, was his number one priority.

He said that his efforts would be poured into reforming the education system through massive investment and consultations with teachers — and reforming the health system.

Macron’s previous efforts to reform pensions were met with mass protests in France. He is perhaps aware that it is not one of his most popular policies – although he remains committed to the principle.

He said it would not be possible to have “social justice” without raising the retirement age – because currently the burden that older people pose on younger ones in France is increasing.

Le Pen is currently on the campaign trail in Guadeloupe.

Her interview was cut short after she was attacked by a pro-independence group on the Caribbean island who grabbed her microphone, leading security to step in.

“I find it unacceptable that the ideas of the far-right can spread around like they are at Club Med. This land, I remind you, is a land of slavery, a land of victims of the ideological ancestors of Marine Le Pen,” said Ronald Selbonne of the Alyans Nasyonal Gwadloup.

Le Pen plans to continue the rest of her visit on the island as scheduled.

During the EU elections of 2019, Le Pen’s party finished top there.

“It shocks me. Political violence is intolerable,” he said.

Le Pen had something nice to say about Macron

Asked for her opinion on US President Joe Biden calling his Russian counterpart a “butcher”, Le Pen said she was disappointed.

“Obviously he is putting oil on the fire,” she said.

“We need deescalation. The last speech from Biden where he said he wanted a regime change in Russia will not contribute to appeasement. The aim is to achieve peace.”

Le Pen’s next words came as a bit of surprise.

“The fact that the French President did not enter into this escalation of words seems positive to me,” she said.

Was that… was that a compliment?