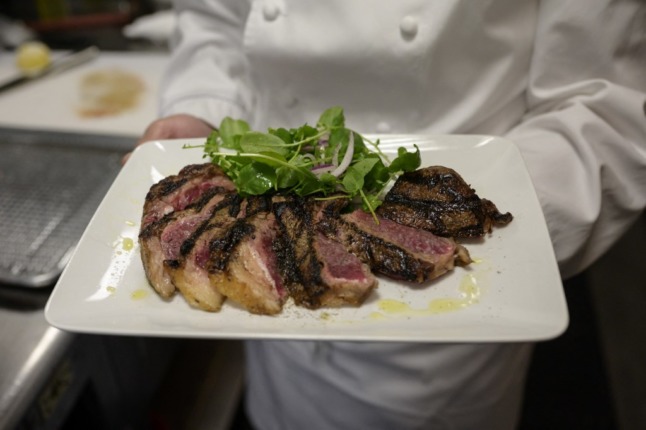 “A charolais pavé [steak] washed down with a good wine,” enthused Valérie Pécresse of the centre-right Les Républicains.

On the others end of the political spectrum, Communist candidate Fabien Roussel sings the praises of “good wine, good meat and good cheese”.

French gastronomy is important to the country’s image – and its farming industry – so politicians frequently invoke classic dishes.

Their choices of foodstuffs are carefully calculated to send a political message – but they’re also increasingly at odds with what French people actually eat.

For example, McDonald’s second most profitable market outside the USA? France.

The two nations that eat the most pizzas per person per year? The USA and France (Italy was third).

The most sold product in French supermarkets? Nutella (which is Italian)

READ ALSO Haute cuisine or hot dogs – what do the French really eat?

These products are rarely mentioned by French politicians, who instead invoke an earlier era of classic French cooking, heavy on meat, dairy produce and wine.

None of this is new, in fact in a famous essay from the 1950s, the philosopher Roland Barthes mused on the use of steak in political speeches, writing: “It’s a unifying dish par excellence. Ideal for a presidential campaign. And very French, because it breaks with the apparent complication of exotic cuisines”.

But in France food is increasingly being dragged into modern ‘culture wars’.

In 2019 the interior minister Gérald Darmanin declared himself “shocked” by ethnic food aisles in supermarkets.

It wasn’t the shelves of Old El Paso tacos, Kikkoman soy sauce and McVitie’s biscuits (French slogan – C’est anglais, mais c’est bon) that he was objecting to – rather the halal and kosher sections which, he claimed, undermined the French idea of laïcité.

EXPLAINED What does laïcité really mean in France?

Darmanin also waded into another food-based row, when a school in Lyon began serving a vegetarian-only menu.

The move was in fact temporary and was intended to simplify the queuing system during the pandemic, but because Lyon is run by a Green mayor it became a political issue too, with Darmanin declaring it an “unacceptable insult” to French farmers and warning of possible health consequences, adding: “Many children often only get to eat meat at the school canteen”.

This drew a veiled reproof from his colleague, health minister Olivier Véran, who pointed out that it is perfectly possible to have a diet that is both healthy and vegetarian, adding that he often cooks vegetarian food for his own children.

While only 2 percent of French people describe themselves as vegetarian, polling in 2017 showed that around 30 percent say they are flexitarian – they only eat meat a couple of times a week and the rest of the time eat meat-free food.

Politicians’ choices of foods to celebrate don’t just exclude vegetarians and vegans, but also people who don’t eat certain foods for religious reasons or who don’t drink alcohol, as French academic Rim-Sarah Alouane points out in the below tweet.

French right wing presidential candidate using food as a tool for political identity: “A Charolais pavé, with a good wine. That's France around the table,” implying that you’re not truly French if you’re not eating the right food. pic.twitter.com/nVgZfnIRxi

And the choices of French politicians also exclude the culinary contributions of immigrants.

If you’re looking for something cheap, filling and delicious that you can find in virtually every French town, head to the couscouserie. The French equivalent of the high-street curry house, these provide the traditional cooking of north Africa – cous cous, tagine and merguez sausages.

And the actual favourite food of the French? According to the annual poll Les Plats préférés des français, run by France 2 TV, it’s cous cous.