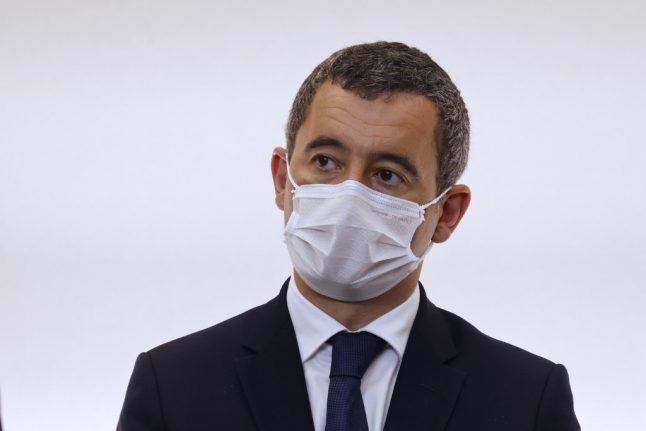 “It’s always shocked me to go into a supermarket and see that, when entering, there would be one type of ethnic food selection here and another one next to it,” declared Gérald Darmanin.

The interior Minister was a guest on Tuesday's evening show of the French channel BFM, dedicated to the beheading of Samuel Paty, the 47-year-old teacher killed in a violent attack that has drawn parallels with the 2015 Charlie Hebdo terror attacks.

Like the satirical magazine before him, Paty had shown his pupils cartoons of the Prophet Mohammed, and police have discovered ties between the attacker and Islamist radicals.

The incident has stirred up a ferocious debate on French state secularism, laïcité, leading President Emmanuel Macron to declare “war” on “political Islam.

Darmanin was invited to talk about all of this on Tuesday, but the comment that really seemed to stick with those who listened in was the one he made about ethnic supermarket aisles.

His words caused a stir on social media, prompting some to respond in outrage, while others – both French and internationals – mocked the minister for his words.

France's interior minister says he is shocked every time he sees an ethnic food aisle in a supermarket, and now I can't stop thinking about him crying next to the soy sauce https://t.co/fCmBjnr7bU

Comments like the one below declaring to 'soon to be put on a watchlist for buying fajitas' flourished on Twitter.

But why would the interior minister bring up ethnic food aisles in an interview about the government's response to a violent terror attack in the first place?

The answer can be found in one little word the interior minister repeated several times during the interview: communautarisme.

“This is how communautarisme begins,” Darmanin said about the ethnic food aisles.

Communautarisme is a French term that has no good English equivalent. It comes from communauté, which means “community”, and could be loosely translated to identity politics.

Communautarisme is often used in a pejorative sense either to brush off criticism of France's universalist state model, or to criticise those perceived as failing to comply with its principles of laïcité – state secularism. Is setting up a halal section in a Carrefour in France promoting separatism or just.. organising? Photo: AFP

When asked whether he wanted to forbid ethnic food aisles in supermarkets, Darmanin said it was not up to him and pushed the responsibility over onto big business owners, who should do their part in “fighting separatism”.

“I'm just saying that big French businesses that sometimes have organised direct marketing (..) want to earn money on communautarisme, and, to me, that's shocking,” he said.

Some cheered the interior minister and said his comments on ethnic food aisles were spot on.

“Darmanin is right. A kosher food aisle or halal food aisle is the beginning of communautarisme,” said Christophe Barbier, a columnist in the French news magazine Express, in a video he posted on Twitter.

“Of course, we need to be able to find halal food or kosher food in the normal, general aisles. But one dedicated aisle is the beginning of communautarisme, because we know that everyone who goes there is Muslim or Jewish,” he said.

Rim-Sarah Alouane, a French legal scholar and law Phd candidate who specialises in religious freedom, human rights and civil liberties in France, Europe and North America, told The Local that the interior minister's words were “absurd.”

“Communautarisme implies that there is a certain part of the population who live on the margins of society and refuse to integrate into the French Republic,” she said.

Darmanin was promoting rather than fighting separatism, she said, referring to his comment during the interview that halal butcher shops and kosher food stores should continue as they do. It was just supermarkets that were promoting communautarisme.

“The big problem with laïcité in France today is that it’s poorly understood. And this ignorance makes it instrumentalised,” she said, adding that, like others before him, Darmanin was twisting French state principles to fit into his preferred narrative.

“It's a strategy of divide and rule,” Alouane said.

To fully understand that, we need to first understand France's principle of state secularism, laïcité.

France separated church and state back in 1905 with a law that was meant to ensure a principle of state neutrality – no religion was to be favoured by the French state – and of religious freedom – all French citizens were free to practice their religion without state interference.

In return, religion also needed to be pulled out from the state. That’s why French public schools today do not allow pupils to wear religious icons in school, why there are no religious assemblies in schools and why public officials such as teachers and police officers cannot wear the Muslim hijab headscarf.

It is also why the far-right party Rassemblement National has not succeeded in its mission to decorate French town and city halls with Christian cribs at Christmas.

France’s state secularism ensures the neutrality of the state, not individuals, who are free to express their religion – any religion – in any way they want. Except for those who fill a public role, who must be neutral during work hours.

READ ALSO ‘My body, my choice' – French Muslim women speak out about headscarves

Supermarkets and other private businesses can, however, organise their shelves however they see fit without breaching with principles of secularism.

“This is an economic matter, not a state matter. And it doesn’t just concern kosher and halal products, it's the same for Corsican sausages, vegetarian products, and so on,” Alouane said.

“The problem we are seeing today is that we want to impose neutrality on individuals, which is the contrary of laïcite. Laïcité  is freedom,” she said. “Interfering with religious matters in this way is in itself a violation of state secularism.”

Darmanin later said he did not regret his comments.

“I don't have one word to take back. Not one. Yes capitalism also has a responsibility in society, not everything can be about money,” he wrote on Twitter.