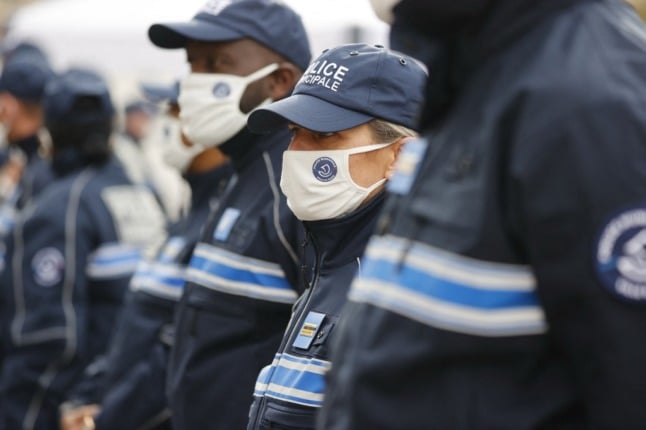 In the run up to the presidential election, we assess the government's record on law-and-order (Photo by Thomas SAMSON / AFP)

Many of Macron’s political opponents have painted a picture of France where crime spiralled ‘out of control’ on his watch.

Macron of course has defended his record, saying that 10,000 new policing jobs had been created since the start of his presidency and pledged to increase the country’s interior security budget by 25 percent over the next five years, double the number of police on the street and cut back on bureaucracy.

But just how much of a problem is crime in France? And is it really getting worse?

According to official data from France’s Interior Ministry, some crimes have become more prevalent over the last five years, while others have become less. In a communiqué last month, the French Interior Ministry, run by Gérald Darmanin who himself was accused of rape in 2017 but has not been convicted, said that rising numbers of sexual violence cases came in the context of more people “speaking out” and a better “consideration of this subject by law enforcement officers”.

Diane Richard, a feminist activist and member of #NousToutes, argues that the number of recorded sexual incidents is not the statistic we should be looking at.

“The number of complaints about rape has gone up but the number of people found guilty is going down,” she said.

“The fact that the number of complaints has gone up is mostly down to the work of feminists and civil society. The emergence of our movement has allowed us to speak about these things more.”

The French Interior Ministry said that 26,000 rape and attempted rape victims came forward in 2020. That same year, just 732 people were sentenced for this crime.

Fraud cases have shot up by 25 percent since 2017 – last year, more than half of all such fraud in France took place via online scams – the government has vowed to increase the manpower and budget of the country’s cyber-police. Other crimes though, including armed robbery, destruction of property, car theft and burglaries are all down.

According to Sébastien Roché, a director of research specialised in the politics of policing with the CNRS [Centre national de la recherche scientifique], said that it is difficult to assess how government policy influences the rise or decline in certain types of crime.

“There is less burglary but this could be because people are better protecting their house or could not leave their homes because of Covid,” he said – noting that a whole range of other factors, including the economy, have huge impacts on crime rates.

Macron’s term hasn’t been marked by mass casualty terror attacks that blighted the presidency of his predecessor, François Hollande.

Terrorism has not gone away, however and the past five years have seen some appalling attacks including the beheading of schoolteacher Samuel Paty in 2020 by a teenager who was radicalised online.

“The priority of this term has been the fight against terrorism,” said Darmanin on Tuesday morning, during an interview on RMC. “Today we speak about it much less.”

Experts say that the government cannot take total credit for the declining incidence and severity of attacks.

“This is not just in France. There was a period where Europe was hit badly which corresponded the ‘golden age’ of the Islamic State,” said Roché. “This period has passed. In reality we are in a different phase.”

In a longer view, however, crime in France has been relatively stable for some time.

The overall crime rate saw an uptick after Macron took charge although it also increased marginally under his predecessor, François Hollande, who governed from 2012-17. 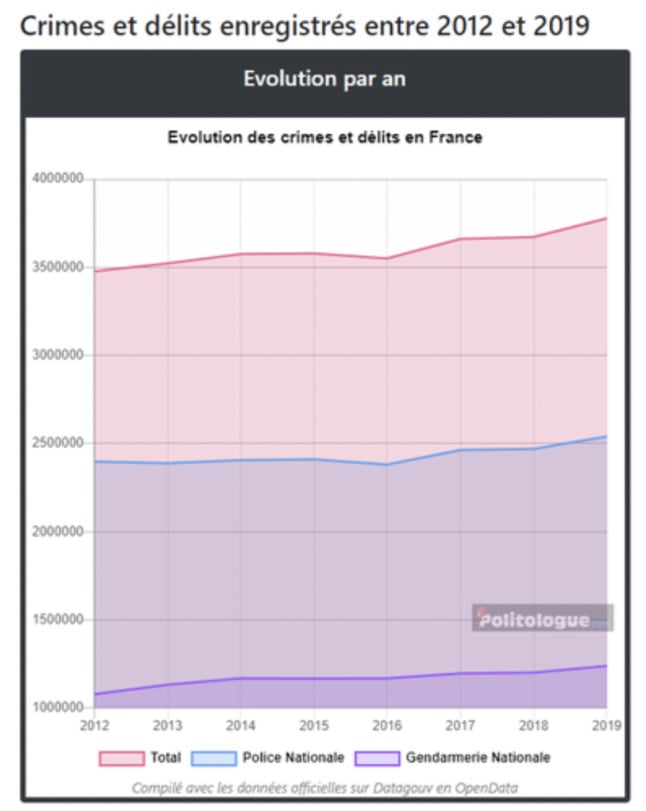 The overall crime rate saw an uptick once Macron took charge after a relative period of stability. The red line shows the total number of illegal serious crimes and mid level offenses recorded by law enforcement authorities. The blue line represents the number recorded by police and the purple line shows those recorded by the Gendarmerie Nationale. Source: data.gouv.fr

But from a broader historical perspective, crime rates in France are relatively stable. 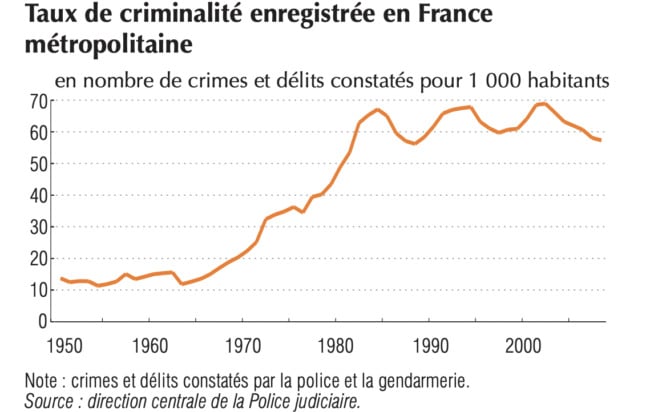 The crime rate in France exploded in the late 1960s but has remained relatively stable since the turn of the century. Source: Insee

France is not the only country where crime shot up in the second half of the 20th century – in the United States, the UK and much of Western Europe, a similar trend was observed. Criminologists have struggle to determine exactly why this is, but among the reasons put forward are: a rise in personal wealth; growing inequality; increased police and reporting of crime; the need to report burglary to the police to make insurance claims; increased use of motorised vehicles; the war on drugs; and deindustrialisation.

The crime rate in France peaked in the early 2000s and has not surpassed six percent during the presidency of Macron or Hollande.

How central is law-and-order to this election?

Law-and-order is a theme that feels more important to this presidential election than during the 2017 contest.

This could be because Macron’s opponents are having a tough time attacking the president on economic grounds and so are looking to frame the debate around other issues.

But Roché thinks it also has to do with the fact that Macron’s main electoral threat comes from the right and far-right.

“The political debate has moved to the right in France. We have two far-right candidates in this election who are polling higher than the most popular left wing candidates. It is extraordinary. There has been a radicalisation effect on other candidates like Valérie Pécresse [candidate for the centre-right Les Républicains party].”

“Security and giving resources to the police and prisons is a unifying theme for the right. Since the French Revolution, the right has always had a discourse which minimises structural problems [such as poverty and inequality]. When you are on the right, you see these problems as making an excuse for criminality.”