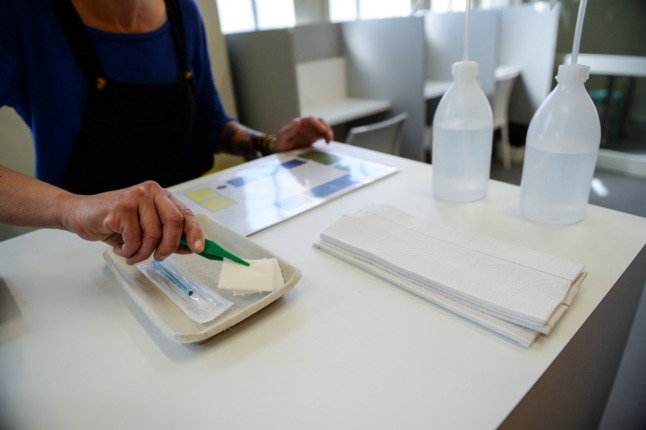 “We have approved funds to finance treatment and addiction centres,” Véran told France Inter radio on Wednesday. “I will provide health and social teams to wean off consumers who are currently on the street.”

As part of the project, the safe consumption rooms have been re-dubbed haltes soin/addiction – recovery/addiction centres (halte can be interpreted as a place to rest, or an order to stop), although they are also popularly referred to as salles de shoot (shooting galleries).

In a letter read out during a Fédération Addiction conference last week, Véran wrote that the goal of the new terminology was to “be done with the caricatures about ‘shooting galleries’ and concentrate on care”.

Véran said two new centres would be created each year at a national level. A law from 2016 authorises the creation of low-risk consumption rooms, but so far just two have been set up – one in Paris and one in Strasbourg. Those test facilities were due to run until 2022, but the government announced last week that they would be extended until 2025.

“I myself was an MP in 2015, involved in the creation of the first consumption room in Strasbourg and things are going very well,” he said.

“We therefore have proof that in our country this type of structure, providing support for withdrawal to avoid risk and unsanitary conditions and to better support the most vulnerable people, works.

In August, Paris Mayor Anne Hidalgo announced plans to create four new facilities in the capital. On September 15th, Prime Minister Jean Castex gave the green light for three of the four sites, but after discussions city hall decided to abandon the fourth site, which was due to be situated on rue Pelleport in the 20th arrondissement. The proposition had drawn criticism from local residents, who complained the site was too close to a school.

“We need coherent proposals for sites, meaning not 15 metres from a nursery or primary school,” Véran said on Wednesday.

Crack consumption is a long-standing problem in Paris, and users were once again evacuated from the jardins d’Eole and Stalingrad areas, towards Porte de la Villette in the 19th arrondissement on Friday.

Residents of the Pantin suburb of Paris denounced a “wall of shame” over the weekend, after authorities bricked up a tunnel under the Paris ring road to stop dispersed addicts from moving out of the capital.

How France compares to its neighbours

In fact, Europe’s first supervised drug consumption room was opened in Berne, Switzerland in 1986. In the 35 years since then, the concept has spread throughout the continent.

There are currently 78 official facilities spread across seven of the countries which report to the European Monitoring Centre for Drugs and Drug Addiction (EMCDDA) – that includes the EU27 as well as third countries such as Switzerland and Norway.

In 2018, in addition to France’s two centres, there were: 31 facilities in 25 cities in the Netherlands; 24 in 15 cities in Germany; five in four cities in Denmark, 13 in seven cities in Spain; two in two cities in Norway; one in Luxembourg; and 12 in eight cities in Switzerland, mostly in German-speaking areas.

As well as clean injection equipment and health advice, many of the centres offer access to primary healthcare and the possibility to take a shower and wash clothes.

According to the EMCDDA, “There is no evidence to suggest that the availability of safer injecting facilities increases drug use or frequency of injecting. These services facilitate rather than delay treatment entry and do not result in higher rates of local drug-related crime.”

The EU agency highlights the effectiveness of drug consumption facilities to “reach and stay in contact with highly marginalised target populations”, while the presence of facilities has also been shown to reduce behaviours such as syringe sharing that increase the risk of HIV transmission and overdose death.

While plans for drug facilities in Paris have proved controversial with residents, where centres do exist, they have been linked to a decrease in public injecting.

“In Barcelona, a fourfold reduction was reported in the number of unsafely disposed syringes being collected in the vicinity from a monthly average of over 13 000 in 2004 to around 3 000 in 2012,” the EMCDDA states.