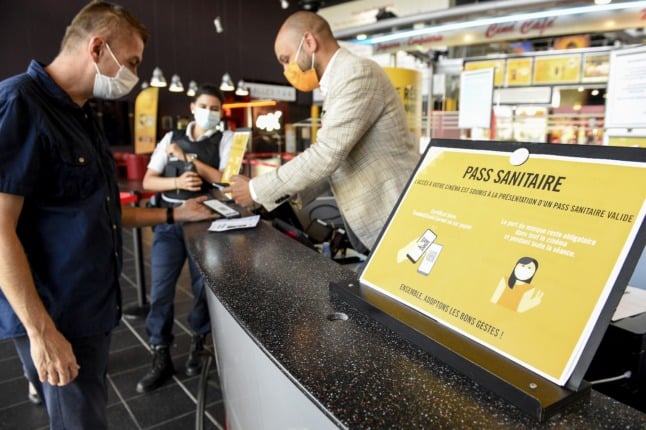 France’s health pass has been required in all cultural and leisure venues hosting more than 50 people since July 21st, and from August 9th, is set to be extended to bars, restaurants as well as mainline trains.

This does not only apply to customers – employees will also have to show proof of vaccination, a negative test within the previous 48 hours, or recent recovery from Covid (a positive test older than 11 days and less than 6 months) to be able to go to work. If not they could face the prospect of losing their jobs.

Here’s how the new legislation is set to be applied at work.

During his televised address on July 12th, President Emmanuel Macron announced that healthcare professionals would have until September 15th to get fully vaccinated.

“For health and non-health workers in hospitals, clinics, retirement homes, establishments for people with disabilities, for all professionals and volunteers who work in contact with elderly or vulnerable people, including in their homes, the vaccine will become obligatory,” Macron said.

Unvaccinated healthcare workers “will not be able to work and will not be paid” from September 15th, Health Minister Olivier Véran told LCI following the President’s announcements.

However, by the time the bill was adopted by Parliament, senators had removed a passage which would have made not having a health pass a sackable offence after a two-month suspension. The bill is currently being reviewed by the Constitutional Council before it can be officially adopted. A ruling is expected on August 5th.

In the current version of the bill, healthcare workers who are not vaccinated or tested every two days will not be laid off, but will be prevented from working and will not be paid, unless they take annual leave.

The same rules will apply to:

People working in venues where clients must show a health pass will also be required to have their own from August 30th.

This will apply to: cultural and leisure venues of over 50 people – including museums, cinemas and tourist attractions – cafés, restaurants, bars, long distance trains, buses and domestic flights, and certain shopping centres.

As with healthcare professionals, people working in venues requiring the health pass could have their contracts and wages suspended if they do not comply with the new rules.

In order to continue being paid, workers can take annual leave or, “with the agreement of their employer”, they could be assigned to “another position which is not subject to this obligation”.

However, French Labour Minister Elisabeth Borne has said that dismissals will be “rare” but possible.

And, as lawyer Michèle Bauer pointed out on Twitter, the new law would allow workers on temporary contracts to be dismissed if they do not show a health pass.

The text states: “The fixed-term work contract can be terminated before its completion date, on the initiative of the employer.”

There was initially some confusion over whether the health pass requirement would apply to all employees of affected businesses, or only those who are in contact with the public.

However, the Labour Ministry told Huffington Post: “The health pass does not apply to businesses in every sense. It’s really for people who welcome and greet clients, the public.”

This means receptionists and waiters will have to show their health passport, but an employee who has a desk job working for the same company would not.

Nor will anybody working for a company, no matter the size, which does not require clients to show a health pass.

The rules will also not apply to businesses which do not host members of the public.