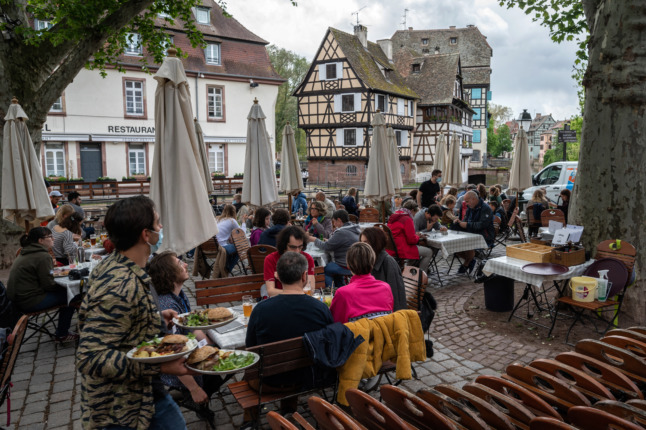 President Emmanuel Macron on Monday evening announced a package of measures aimed at controlling a fourth wave of Covid in France – including the extension of the health passport t venues including bars, cafés, shopping centres, tourist sites, museums, cinemas and for long-distance train and bus travel.

This means that to access any of these venues, people must produce a health passport showing either that they have been vaccinated, have recently recovered from Covid or have tested negative within the last 72 hours.

The day after Macron’s address, bar and restaurant owners in the northern town of Maubeuge, near Lille in the Nord département, were still trying to process the news.

While many accepted that a stronger approach is needed, questions remain about how the health pass – which is currently used only for nightclubs, and events hosting more than 1,000 people – will work in practice.

“It’s good, although they maybe could have prepared this sooner,” said Jean-François Varnier, owner of the bar Le Régent.

“When they reopened the bars on May 19th, it would have been simpler to say, ‘We’re opening bars and restaurants, but from September 1st, if you’re not vaccinated, there’ll be the health pass and you won’t be able to come in.’ We would have had three months, easily enough time for the more stubborn people to get vaccinated.”

The timeframe is a concern throughout the hospitality industry, with unions calling for the health pass to be delayed until September.

“The measure will be unenforceable at the beginning of August. Almost 60 percent of French people won’t be able to go to a restaurant if this date is kept, because they won’t have received both doses,” Laurent Fréchet, head of the restaurants arm of the GNI hospitality association, told France Info.

Following Monday’s televised address, record numbers of people booked a vaccine appointment, and in the long term, Varnier is not worried about the impact of the policy on his business.

“The Frenchman does nothing but complain, but when it’s time to go to the front, there’s nobody left,” he said, referencing the two world wars. “I’m not worried, everybody’s going to get vaccinated.”

He added: “Most of my customers are over 35, so I’m lucky that at least 80 percent of them are already vaccinated. For the bars which mainly have clients under 30, I think it will be complicated.”

Nationwide, only 48 percent of 18 to 29-year-olds have received at least one dose, and 28 percent are fully vaccinated, compared to 53 percent among all over-18s.

More worrying for the owner of Le Régent is the question of how he’s going to be able to check every customer has a health pass.

“I’m a bar owner, not a policeman,” he said. “I’m there to welcome my clients, talk to them, serve them drinks. If I have to check every time whether they’re vaccinated or have a pass, how much time is that going to take? I don’t have the money to hire a bouncer.”

For the moment, he has only one option: hope that people follow the rules themselves.

Earlier this week, Les Echos reported that a bill will be presented on Monday, according to which business owners not checking health passes would risk up to €45,000 and one year in prison. Séverine Labiau will now have to get vaccinated to work in her own restaurant. Photo: Martin Greenacre.

Two doors down, Séverine Labiau, who runs Le Globe brasserie with her husband, is equally worried about enforcing the new rules. “If you have a table of six people, and maybe one who doesn’t have the pass, to have to tell that person you can’t serve them because they’re not vaccinated, that can create tension,” she said.

Labiau herself has not yet been taken an appointment – she was hoping to wait until the vaccines could be evaluated with greater distance – but she will have to take the step in order to continue working in her own restaurant.

“We’ve implemented everything we needed to – the antibacterial gel, distancing, contact details, the TousAntiCovid app – all of those were things I told myself we had to do, it’s normal. But now that they’re making the vaccine a requirement for coming to work, I’m against that. But I’ll have to do it, and so will the staff.”

Labiau said half of her staff were not yet vaccinated, but she did not expect any of them to refuse.

READ ALSO Can families with unvaccinated children holiday in France this summer?

Health minister Olivier Véran announced on Tuesday that bar, restaurant and shopping centre employees would be given extra time to comply with the new rules – until August 1st to receive a first dose, and until August 30th for the second dose, otherwise they would have to take a Covid test every other day from September.

“I have no idea how we’re going to carry out checks,” admitted Stéphane Lefevre, manager of the restaurant Au Bureau. “We’re waiting for advice from the UMIH [hospitality industry union].”

Despite the complications, Lefevre said he welcomed the President’s announcement.

He believes it’s necessary “to protect our establishments, because it’s important we don’t go back into lockdown. We’ve been through a difficult time, and if there’s one way for things to get better, it’s through vaccinations.”

Lefevre said his restaurant often welcomes clients from the UK, but he does not think the new regulations will cause them any additional problems. Indeed, the French government has confirmed that NHS vaccination certificates will be recognised in France as a health passport.

In other countries, such as the USA, which do not issue QR codes with vaccination certificates, the situation is less clear, but the foreign ministry has promised to release detailed information for each country by the end of the week.