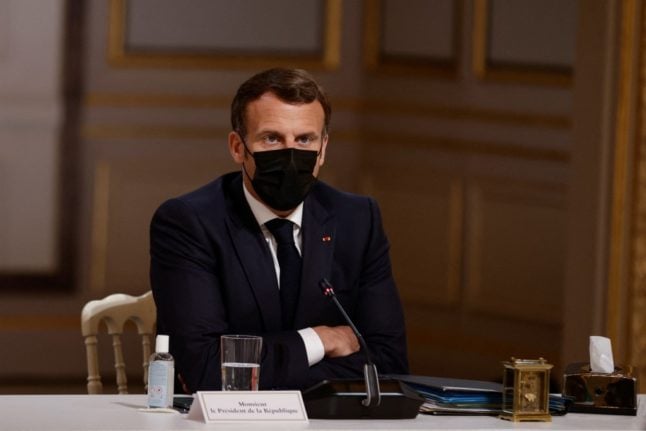 His decision to shed most pandemic restrictions in four stages over the next two months is a great leap of faith, all the same.

He is relying on warmer weather to calm the virus. He is relying on France’s vaccination programme – vastly improved but far from perfect – to slow the rate of infections and deaths.

IN DETAIL: France’s calendar for reopening from lockdown

He may get away with it. Or he may be left looking foolish and exposed by circumstances beyond his control. Worryingly, the first three cases of the ‘Indian variant’ of Covid-19 were reported today in Lot-et-Garonne and Bouches-du-Rhône.

The re-opening schedule is far more comprehensive than many had expected but cautious in its own way.

Restaurants, cafés, museum, cinemas will re-open progressively from May 19th but the curfew will continue in some form until early June. Départements or cities where the virus remains very active – over 400 new cases per 100,000 people in 7 days – risk having their re-opening delayed.

As things stand, only eight départements – the Bouches-du-Rhône (Marseille) and seven in the greater Paris area – still have an Incidence Rate of over 400.

The present lockdown lite and previous local restrictions have been quietly successful. The Nice/Cannes area, a black spot in February, now has an incidence of only 157 – below the alert threshold.

Epidemiologists are queuing up on TV to criticise Macron all the same.

Karine Lacombe, head of infectious diseases at the Saint-Antoine hospital in Paris, said: “It’s another political gamble. The health situation is absolutely unsatisfactory…The only way we can get away with it is if the vaccine programme is enlarged.”

In his interview with the regional press this morning (much leaked yesterday) Macron insisted that he has taken a balanced decision – a “human” choice not a political one.

“I’ve never gambled on the health and safety of our citizens,” the President said. “I accept that I have made a choice but it’s not a gamble. We are guided by science but we have put  human considerations first, which means everything that defines the live of men and women, not just health management.

“There is more to the life of the nation than curves on a chart.”

Fair enough. After more than a year of Covid disruption, Macron is right to consider the impact of continuing restrictions on the nation’s mental, social, educational and economic health.

A lingering doubt remains. Would he have been so anxious to loosen the bonds while the virus remains highly active if there had not been a presidential election less than 12 months away?

As Karine Lacombe says, it will only make sense if the vaccine programme continues apace – or preferably accelerates.

Hence the other announcement in Macron’s interview – an announcement  which was expanded this morning by the health minister, Olivier Véran.

Macron said that everyone aged 18 to 55 with a severe weight problem would be eligible for vaccination from May 1st. Véran has now extended this to everyone over-18 with fragile health – 4,000,000 people.

The reason for this shift is clear. Not enough people were coming forward for a jab within the eligible categories (ie everyone over-55 plus health and emergency workers). Earlier this week, there were over 200,000 unclaimed vaccination slots available (and some of those slots include up to 20 jabs).

This is not just because of resistance to the AstraZeneca vaccine. As Macron said in his interview, France has a growing backlog of vaccine “stocks”,  mostly AZ but also Moderna (much less so Pfizer-BioNtech).

France’s resistance to vaccines generally is beginning to be felt. The country no longer has a shortage of doses; it does have a shortage of people willing to be dosed (while people in some areas are still struggling to get an appointment).

Lets give credit where it’s due (even though the UK media and French opposition politicians refuse to do so). The French vaccine programme is much, much improved.

A new one-day record of 545,888 first and second jabs was achieved on Thursday. A similar figure is likely on Friday.

With the opening up of slots to fragile over-18s, and with the arrival of the one-dose Johnson & Johnson vaccine, France might just hit its next target of 20m first doses by May 15th.

Twenty million people is 40 percent of the adult population. The ambitious June 15th target is 30m people – or 60 percent. The effect on cases and deaths should start to be felt soon. Covid deaths in care homes (100 percent jabbed) have fallen to a trickle of about 7 a day.

And yet and yet…

The Indian variant has arrived in France. The South African virus is spreading in the Paris area.

Macron – whatever his motives – is taking a risk. Let us hope that he is proved right for the wrong reasons, rather than wrong for the right reasons.