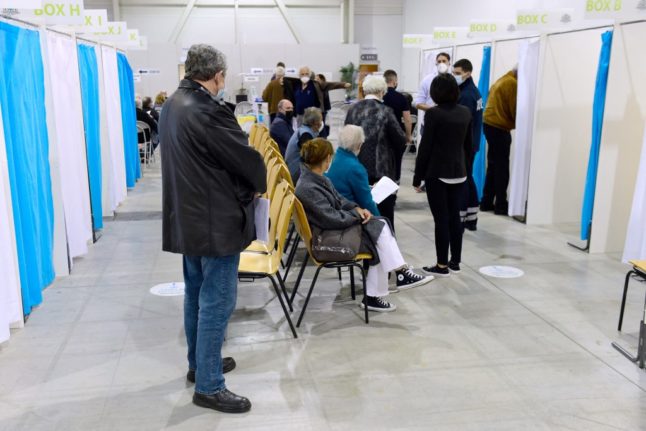 Vaccine centres in France give thousands of doses a day. Photo: Nicolas Tucat/AFP

Headlines about 270,000 unfilled vaccine appointments in France have prompted two questions from the many millions of people still waiting to be vaccinated – where are these slots and how can I find one?

“It is true that we have a number of appointments that are not being kept. According to the information I have, we should not exaggerate [their number],” prime minister Jean Castex said at on Wednesday.

“There are a certain number of large centres, especially the large metropolitan vaccination centres, which have vaccination slots that remain open,” health minister Olivier Véran also acknowledged on Tuesday.

How many free slots?

The 270,000 figure comes from the website Vite ma Dose ! (Quickly, my dose!) which was set up to help people struggling to find an appointment near them. It is essentially a search site that links to the various different platforms offering appointments and finds the nearest appointment slot based on the user’s postcode.

The site was set up in response to so many people who were eligible for a vaccine but reported finding it hard to book an appointment as there were no free slots near them.

Its founder is Guillaume Rozier, the French data scientist behind the Covid Tracker site and he points out that there are some qualifications to the eye-catching 270,000 figure.

First these are available slots for the next 50 days (so until mid June) at centres around the country. There are now several thousand vaccine centres as well as 22,000 pharmacies offering jabs and some GPs, so that could amount to just one free appointment per centre.

Second the number of slots does not necessarily correspond with the number of doses available with, according to Rozier, GPs and pharmacies opening up many slots to be sure of finding patients and then closing them when the doses they have available are taken.

On average, France is now giving around 300,000 vaccines per day.

At the start of the French vaccine programme there was a marked trend of the country having many more doses than it was injecting, which was largely blamed on overly-complicated supply chains.

Since then, vaccine use has caught up with vaccine deliveries, but this may lag again if extra deliveries do not correspond to extra injections given.

The below chart shows deliveries in grey, with doses given in blue (light blue for first doses and dark blue for second doses).

There have also been problems on a local level such as the vaccine centre in Nice which closed early on a Saturday when no-one turned up, local officials say there had been issues in publicising the centre’s opening hours.

There are also reports of hesitancy around the AstraZeneca vaccine, which is now only given to over 55s in France.

Some vaccine centres say they struggle to persuade people to take the AstraZeneca doses but overall the use of AstraZeneca in France is around 75 percent of available doses – lower than Pfizer on 90 percent but comparable to Moderna.

IN NUMBERS How many leftover doses of AstraZeneca’s Covid vaccine are there in France?

The health ministry says that some of the ‘spare’ slots are made available at the last minute by centres which have received more doses than anticipated – they can appear to be unclaimed but in fact have only been available for a matter or hours or even minutes.

But reports of vacant slots have lead to calls for the government to allow the vaccine to be opened up to all.

“We had a first stage where the number of doses was limited, and where it was therefore logical to restrict vaccination to the populations most at risk. But now, we’re in the middle of a cumbersome administrative process that continues.

France has based the phases of its rollout on the risk of developing the most severe forms of Covid – so the highly vulnerable residents of Ehpad nursing homes were the first to become eligible, along with the staff who looked after them, followed gradually by other age groups, people with serious medical conditions and people at high risk of exposure to the virus such as health workers.

Of the groups who were eligible in the first stages of the rollout, according to health ministry figures

For the entire population, 20 percent of people have received at least one dose, rising to 27 percent for the adult population.

And for the moment it seems like the government is sticking with a phased rollout, with health minister Olivier Véran’s call to people take up vaccine slots restricted to those in eligible groups.

There may, however, be an acceleration of the opening up to the next group, which is under 55s with no medical conditions, while Véran has also called on vaccine centres that have unused slots to call in people in younger age groups are subscribe to a platform such as Covid Liste which can send out alerts to people on spare appointments in their area.