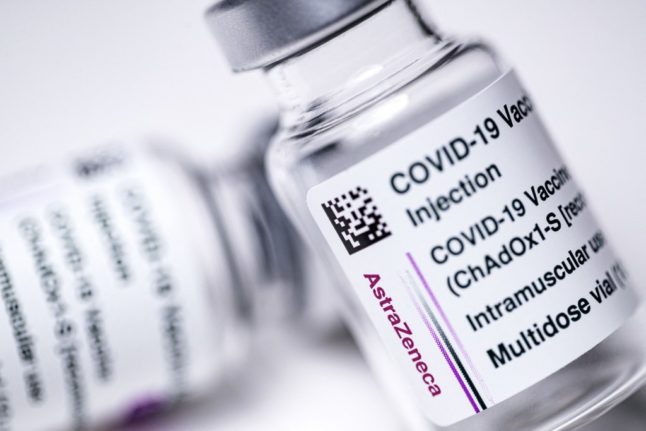 Local media reported that the large ‘vaccinedrome’ in the Palais des expositions in Nice closed its doors several hours early on Saturday as hardly anyone turned up, despite having 4,000 doses of the AstraZeneca vaccine available.

Benoit Huber from the Alpes-Maritime préfecture told Nice Matin that just 58 people turned up in the morning, leading the centre to close in the early afternoon.

So is this an isolated incident or a wider problem in France?

Data on vaccine usage is not straightforward because France gets weekly deliveries, not always on the same day, so usage rates appear to fluctuate throughout the week depending on the time since the most recent delivery.

However French newspaper Le Parisien has published a data breakdown showing a 74 percent usage rate for AstraZeneca, compared with 68 percent for Moderna and 92 percent for Pfizer BioN Tech. The rollout of the Johnson & Johnson vaccine been paused in Europe by the manufacturer.

The Health Ministry’s most recent figures are 93 percent usage for Pfizer and 74 percent for AstraZeneca and Moderna.

Pfizer is by far the most widely-used vaccine, but it has also been delivered in the largest numbers. Overall, France has greatly increased the usage rate of vaccines since the early days of the programme when millions of doses appeared to be sitting unused – an issue that was blamed on an over-complicated supply system.

While François Bricaire, who is involved with the vaccine programme in Paris, added: “Pfizer, it will take five minutes to fill in the questionnaire. But for AstraZeneca, you have to take the time to explain, to convince… Some people agree, others don’t want it. Already it had not been given good press and is less effective against variants, and the blood clot link was the final straw.”

People in France are not given a choice of vaccines when they book their appointment.

Government spokesman Gabriel Attal acknowledged on Monday: “We have a lot of work to do to restore confidence in the AstraZeneca vaccine.”

However some have pointed to other factors to explain the lower uses of AstraZeneca, primarily the fact that it is not available to all.

Following fears over links to blood clots in younger people, France changed its guidance on AstraZeneca, so that it is now used only on people aged between 55 and 74, while Pfizer and Moderna can be used on all age groups.

Under 55s who have previously had a first dose of AstraZeneca will receive a different vaccine for their second dose.

With the opening of larger ‘vaccinedrome’ sites and drive-in centres the type of vaccine used is more varied, but AstraZeneca is more widely used by family doctors and pharmacies, who are more likely to have logistical and storage issues than the large vaccine centres.

The issue with Moderna’s usage seems harder to explain, as it has not suffered from the image problems associated with AstraZeneca and is of the same vaccine type as Pfizer.

France has received relatively small quantities of Moderna, meaning it has not played a major part in the vaccination drive so far, leading infectious diseases expert Benjamin Davido to suggest that it suffers from a lack of ‘brand recognition’: “There is a feeling that there is confusion and that people only want Pfizer. Nobody talks about Moderna, which is lumped in with AstraZeneca.”

Luc Duquesnel suggested that the low numbers of Moderna vaccine cause logistical problems with some doses having to be kept to supply second doses for patients.

The Moderna vaccine’s use may pick up once its use it expanded to pharmacies – expected from June after a trial in the Moselle area – and it could also be used to give second doses to the under 55s, who got AstraZeneca for their first injection – an estimated 500,000 people, mostly health workers.

Still the most common complaint on the ground in France is not being able to find a vacant appointment slot, even for those in eligible groups.

Several websites have been set up aimed at helping people to find appointments in their area, and after the news broke of the closed vaccine centre in Nice, many people commented on social media that they wished they had known there were doses going spare – they would have snapped them up.

Since opening at the start of April, the Nice vaccinedrome has been vaccinating up to 5,000 people a day.

In total, 12.5 million people have had at least one dose of the vaccine and the government’s next target it to have 20 million people vaccinated by mid May.